Politics Yanukovych - the path to the collapse of Ukraine 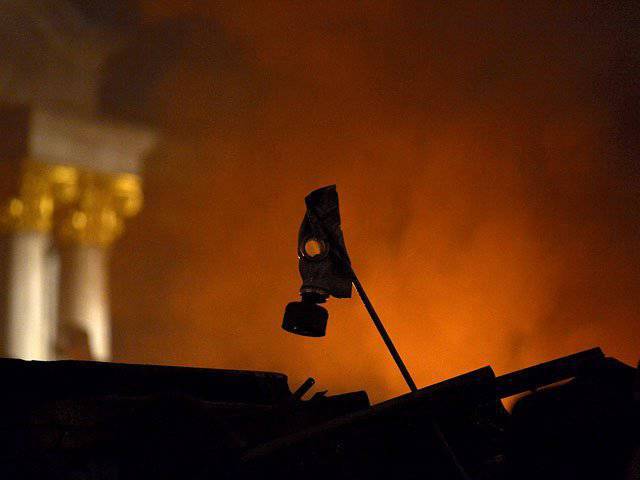 Yesterday, the press service of the President of Ukraine published the statements of V. Yanukovych that he would initiate early presidential elections and return the Constitution of 2004. In his statement, the President called on all political forces to form a single “government of national trust”. The statement, in essence, means capitulation to the demands of opposition leaders and the recognition of the well-known fact that the current president of Ukraine is a political corpse.

This belated insight struck Viktor Fedorovich, when the question was no longer about the “corpse”, but about the “grave” in which he would be buried. Judging by the latest reports, Ukraine will become this coffin.

Throughout all the events on the Maidan, Yanukovych demonstrated an amazing ability for indecisive, inconsistent, belated decisions and initiatives, for frankly weak and stupid actions. Therefore, now we see not just a narrowing of the field for maneuver by the official government, but the beginning of a civil war.

At the same time, the president does not tire of calling for consensus, compromise, and a “peaceful resolution of the current situation.” But let's be honest. These appeals were as weak as the actions were weak. All the steps taken by Yanukovych, each time did not correspond to the current situation, because it was originally created under the civil confrontation. And only tough actions at the beginning of events could resolve it peacefully.

But further errors only grew - amid all the same dismal pleas for agreement. Here are the most fatal ones.

The resignation of the Cabinet Azarov was a step to nowhere. Foreign sponsors easily counted such a near action. As a result, the opposition leaders abandoned government seats, but instead of ministers there appeared an acting president, which once again showed not flexibility, but weakness of power.

Since then, the situation all the time intensified. Using any occasion, successfully selecting the moment, the opposition initiated the deepening of the conflict, the entire responsibility for which was shifted to power. Gradually, clashes broke out not only in Kiev, but also in the regions, between different branches of government. The state began to collapse not only geographically, but also institutionally.

A lot was said about the possibility of introducing a state of emergency in the country, the criminal prosecution of both leaders and participants in the riots. These words remained words, like all calls for reconciliation. The opposition only increased its capabilities, while the government lost its own.

of the latter, News we see that now it’s not necessary to speak about the state of emergency, but the Council has already banned the CTO regime in Kiev. There is also a split within the highest authority. Meanwhile, the opposition, which has long looked like gangs of neo-Nazis and racists in Western Ukraine, is taking control of more and more government buildings.

And in this situation, Yanukovych, in fact, agrees with the requirements that he put forward a month ago. But now it does not satisfy either Bandera or the country as a whole, much less the puppet-maid and puppeteers of Maidan. That is, this is another step to nowhere, as has already happened with the government of Azarov. The timeliness and weakness of this step only shatters the already flimsy foundations of statehood, expanding the power vacuum.

Thus, we see that the actions of Yanukovych constantly lead to results directly opposite to his intentions. This, if not predetermined, then, at least, was one of the main factors of the civil war beginning in Kiev.

Truly, good intentions lined the road to hell. And Yanukovych just became one of the guides on this road. Along with Western customers and their puppets in the country. As you know, judged by deeds, not by words. The question is whether the court stories I’ll have to answer V. Yanukovych, it’s just a trifle compared to what starts in Ukraine ...

The full text of the statement of the President of Ukraine V. Yanukovych: http://www.president.gov.ua/ru/news/?cat=1