Revenge for the successes of the army - new attacks

February 22 2014
22
In the Al-Kalamoun region of Damascus, successful counter-terrorism operations continue. The main battles are currently going beyond the city of Yabrud. The army is successfully advancing in its eastern neighborhoods. Many terrorists were liquidated, mainly from the Islamic Front organization. It was possible, in particular, to destroy the leader of one of the large factions, a Saudi named Abu Malik, as well as a certain Mahmoud Aruk, who was responsible for financing terrorist activities in Yabrud and the surrounding area.


The inhabitants of the Christian city of Saidnaya, famous for its ancient monasteries, are forced to constantly defend themselves against bandits. 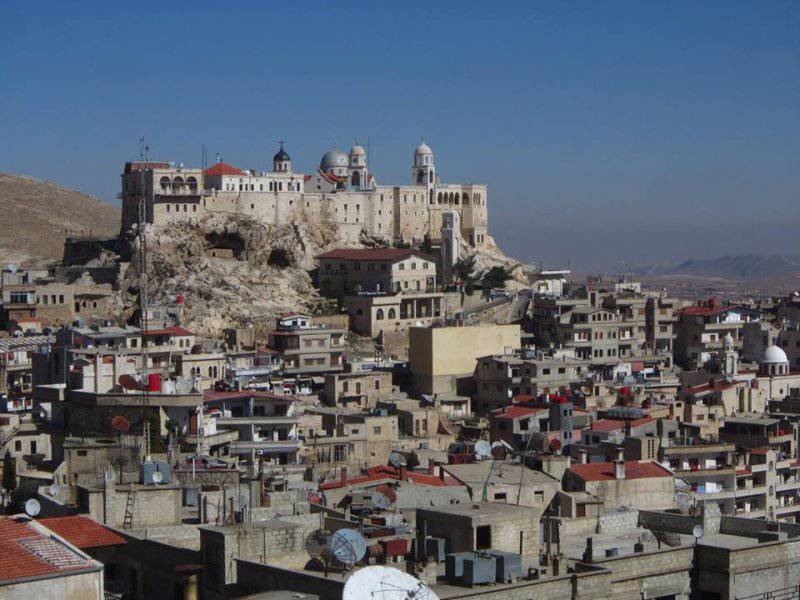 One of the outstanding monuments stories - Cherubov monastery - has been repeatedly attacked by terrorists, as a result of which its walls are damaged, windows are broken. The quiet life of the holy monastery is broken. Residents of the cozy houses of Saidnaya also live in constant alarm. Snipers are shooting from nearby Rankus.

As they say, Saidnaya’s defenders, who have repeatedly had to fight terrorists on the outskirts of the city, that most of the militants who are identified among those killed are not Syrians, but citizens of other countries, mainly Saudi Arabia. There are mercenaries from France, as well as from Chechnya.

Intense fighting also continues in the city of Dareia, in the village of Khan Ash-Shih, the workers' town of Adra. In the latter, in particular, the truck with the weaponswhich was transported for the Islamic Front.

In the province of Hama, the village of Ma'an was liberated from the gangsters - the very one in which the gangsters had recently staged a monstrous massacre, which killed more than 50 people.

In the province of Aleppo, the army liberated the villages of Sheikh Nadzhar and Tellat Al-Ghali.

In the south of the country in the province of Daraa, the military successfully repelled an attempt by the gang to penetrate from Jordan to Syria in the area of ​​the village of Al-Mataia. Many members of the group eliminated and injured. The remaining fled, running back to where they came from.

The terrorists, defeated at the hands of the soldiers in the south and the north, recoup on the civilian population, avenging him for supporting the army. This happened, in particular, in the capital quarter of Ash-Shagur, where a huge patriotic demonstration took place recently. The next day, the bandits blew up an improvised explosive device. One person was injured caused damage.

An employee of the Syrian Red Crescent Society, Nasrin Al-Hakim, was killed on the way to Damascus on the way to work. All her "fault" consists only in the fact that she was a volunteer and provided medical assistance to the Syrians.

In the city of Harasta, the province of Damascus, terrorists bombarded a hospital. A nurse was seriously injured. As a result of the breaking of mortar shells in another quarter of the city, three people were injured.

Projectiles fired by gangsters in the At-Turba quarter of the city of Dzharaman resulted in the death of two citizens. Five suffered.

In the village of Zhdeydat Al-Wadi, the “oppositionists” launched two “hellish machines”, as a result of which five civilians were killed. Among the victims is a mother with two children.

And in the village of Dzherud, the persons who made the explosive device paid for it - as a result of its spontaneous explosion, several intruders were killed and injured.

In Hasaka province, near the town of Kamyshly, criminals attempted to attack granaries to steal wheat. The army and the locals fought back. As a result, the group was defeated, the terrorist 4 was liquidated from the Islamic State of Iraq and the Levant organization, their cars were disabled.

In the province of Homs, in the village of Al-Musherfa, an attack on a water station was repulsed. If the attack were successful, people in this and neighboring villages would be left without drinking water. However, all the attackers were eliminated and injured.

In the province of Hama in the city of Mharda, a similar crime of "opposition" claimed the lives of two people. The six suffered.

In the city of Aleppo, gangsters bombarded Al-Kufran mosque with a mortar. The girl died, another child was injured. The mosque and surrounding houses, as well as citizens' cars suffered.

... Sometimes they ask me - is it worth telling in detail about the crimes of terrorists? In fact, these crimes are much more, and they occur virtually daily. It is impossible to report all physically. But the whole information machine of the West and the USA is working to blame the legitimate government of the country for the sufferings of the Syrian people. The crimes of terrorists are silently ignored in any way - no matter what: the destruction of shrines, mass slaughter, the killing of innocent people, attacks on life support objects. All this falls under the characteristic of war crimes and crimes against humanity. However, while continuing to supply weapons to terrorists and covering them politically, the West and the United States become complicit in the atrocities.

It remains to express the hope that one day there will be an objective trial. But not the court that threatens the West against the defenders of the Syrian people, but the one that will consider the crimes of Obama, Hollande, Cameron, Kerry, Erdogan, the monarchs of the Gulf and, of course, their puppets among the "opposition".

Ctrl Enter
Noticed oshЫbku Highlight text and press. Ctrl + Enter
We are
The fall of the Syrian airbase Abu ad-Duhor. The longest siege of the civil war is overJudgment in Tripoli. Saif al-Islam Gaddafi sentenced to death
Military Reviewin Yandex News
Military Reviewin Google News
22 comments
Information
Dear reader, to leave comments on the publication, you must sign in.