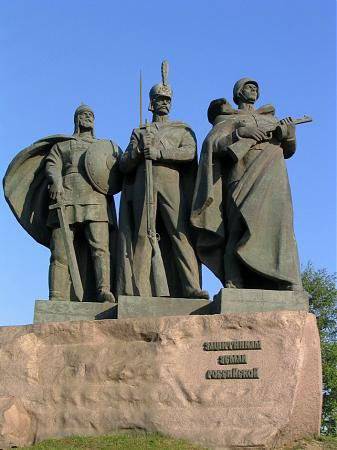 The world capsizes. White becomes black, black becomes white. Light is a shadow, and a lie is true.
A swamp of lies has already swallowed Yugoslavia, Libya. Syria.

Russia is here and there tested for strength. In Moscow, for almost two years, the Bolotnaya Business, fueled by the Echo of Moscow (which it would be more correct to call the Washington Shoutbox), has been dragging on.

And yet, in spite of everything, there is not just hope, but confidence that Russia will not get bogged down in the “swamp”. Because we have a fulcrum. That is why we celebrate Defender of the Fatherland Day, the day of military glory. And this is not at all the International Men's Day, in which this holiday for many years trying to remake. And, probably, the biggest holiday will come when every male citizen becomes a real defender of his Fatherland, his home, his family. On this holiday, it is worth remembering the women who defended and continue to defend their Fatherland. I want to congratulate all the organizers, participants and guests of the Military Review site for their contribution to the real defense of the Fatherland in the context of a harsh and merciless information war. This is one of the few information resources that holds defense. Whatever may be said about the army and the military, whatever mud they watered, whatever scoundrels emerge for a short time from among those who cling to the army, the foothold in the overturned world remains among the real defenders of the Fatherland. And this point of support is not in order to once again turn the world, but in order to give stability to this world.

The world is overturning. Not for the first time for me. One of these personal coups occurred at dawn on April 26, 1966 in Tashkent. An earthquake that destroyed not only my city, but also my inner world. In the ruined city, the insides of the collapsed houses opened, what was closets, beds, rooms, what was a native school. Some of the surviving houses still had televisions. From the evening News we learned that in our city there was an earthquake with a magnitude of 4 points, there were no casualties and destruction, in some houses chandeliers swayed. Only the last was true - some chandeliers still continued to sway in the wind on the wires ...

It was not an earthquake that shocked me (although it was scary, because many people thought: “War”). My world turned the first lie in my life from a source they believed. The world overturned. My homeland, the Soviet Union, was still firmly in place, but at its base lies a crack of lies.

The second time my world overturned again on April 26, but already on the 1986 of the year. By the will of fate in the person of the Ministry of Defense, I, an absolutely civilian, who graduated from one of the universities of the Soviet Union, had the opportunity to get to the Headquarters of the Carpathian Military District on distribution and live in Ukraine. Again lulling media reports and forced abortion of women who lived in Pripyat and were pregnant at that fateful time. One close friend of mine managed to avoid this and hide in the Far East, where she safely gave birth to healthy twins. It was a miracle. Because she received a considerable dose of radiation, her hair completely fell out, which worried the medical staff, and therefore she had to give up pregnancy management, hide and go to the hospital only by the time of delivery, when it is impossible to do anything except for obstetrics.

Then there was December 1991 of the year. Lviv. The Russians, who did not live on the territory of the RSFSR, one day woke up by “occupiers”. To speak Russian in public places has become dangerous, especially for people in uniform. And again the world turned upside down. Black became white, white - black. The big black stamp in the Soviet passport, which crosses the Soviet past, everything that was believed and proud of, became the blackest. But without this stamp, who made a citizen of a citizen of the USSR "Square" Ukraine, it was impossible even to buy bread. On all the fences and walls there are inscriptions indicating the direction of movement for Russians: “Suitcase - Station - Russia”. Many friends "sharply" forgot the Russian language and began to give interviews in an instant when foreign journalists appeared about how they were oppressed. "Curse moskali". They did not allow me to study, to pray, "Rozmlyulyati rydnoy movoy". Lie at every turn. Lies with clear eyes.

Schools burned Russian books! (And in 2004, 1, September, the granddaughter of my girlfriend came from school and brought scraps of the Russian paper tricolor, which they were told to tear in the World Lesson.) I saw it with my own eyes.

Tolstoy, Pushkin selectively translated into Ukrainian and "passed" in the newly thought-out course of "world literature." And, of course, quickly rewrote history. My children at the State University studied in the course of the history of Ukraine fairy tales about how the ancient Greeks exported lard and honey from the territory of Ukraine. It seemed absurd, farcical, but quickly became too serious ...

Our Russian family managed to get Russian citizenship only in 1998, and it was a miracle. It would be much easier for Ethiopian or Tajik to do this. But with many adventures we lived in Russia long before receiving citizenship. Lived people without citizenship. Lived, worked, served. Nelaskova our homeland to her children was in those years! Few Russians, who were simply thrown into the new independent states, managed to find refuge in Russia. Meanwhile, over the past 20 over the years, it is easy for everyone, but not Russian, to become citizens of Russia. This is how the demographic problem is solved today. It hurts too. But hope is still alive ...

And here again it is necessary to go through “Maidan” as a symbol of an eclipse of the mind, memory, honor and conscience and all human. It was called the "formation of civil society."

Once again, the world tipped off at the end of November 2013. I have no time for political intrigue, I am a simple Russian woman who has many friends in different cities and countries. My, barely restored peace, this time overturned my Ukrainian friends and friends "Square" Ukraine. We had a lot in common in work, creativity, joint projects for the common good. And everything collapsed. The shock of consciousness, the rift of conscience, the shift of morality. We have ceased to understand each other. I was struck by one phrase, which they began to repeat, like a spell: “Everything that you are shown is a lie, photoshop, installation!”

Guys, we have long grown up from the age when something was shown to us or not shown! Today, more than ever, there is an opportunity to choose what to watch and what to listen to. We are able to choose. And an interesting fact came to light. In people who know Russian, who understand some closely related languages ​​and, at least weakly, one of the European languages, the choice turned out to be much wider. In Russian it was possible to find information from different sides. And in other languages ​​- only with one. A comprehensive review is possible only for those who do not stop to read in Russian. In other languages, information is strictly metered and narrowly targeted. Virtually no choice. Eat what is given, or read in Russian. And this is not given to all. Some "pride" does not allow reading in Russian.

Another "debilizm" heard from Ukrainian friends, who also began to grow their pride in their country against the backdrop of the Maidan. It turns out that one of the modern “prophets” has uttered a new “truth” about the fact that it is Ukraine that brings light and salvation to the whole world. At first, such a “prophecy” caused surprise, and then the first “light” appeared. It just became clear who is who. And from whom this "prophet". The luminous angel, Lucifer, Dayniece is his name, and also a liar and the father of lies.

So everything clears up. And now it is especially important not to lose the foundation, the fulcrum.

No one asked for mercy.
Forgive others
Revenge not thawing
My love
And my pain -
Russia.
My daily anxiety.
When rocking the planet horse trample
And walked east
In the unthinkable robbery,
Shy haughty Europe
And hid behind the wounded
You.
When lead clouds poured
And there was a thunderstorm from the West,
Looking East with the hope of a mighty
In all his slanting eyes.
You saved everyone taking flour
Great
And in the stars,
And in the crosses ...
You were the first to stretch your hand
Defeated helping stand up.
In birch all.
In the snows of Siberian crisp,
All in the veins of the blue life-giving rivers ...
Mysterious ...
Only not for Russians!
One indestructible forever.
Heavy feet trampling
Hostile threats
Enemy lie
Sturdy
By-the-burratzi straining
You're leading the whole planet.
Boris Kulikov.

Our dear and beloved defenders of the Fatherland!
Happy holiday to you! Thank you for the fact that in any trials it is you who are the strength and support that helps the world to stand.
And in order for you to have the strength and courage to keep the world on your shoulders, I want to wish you to be loved and loved so that you always return to your home!
I wish you happiness!