"Hello, arms!": How and how Maidan fighters are equipped 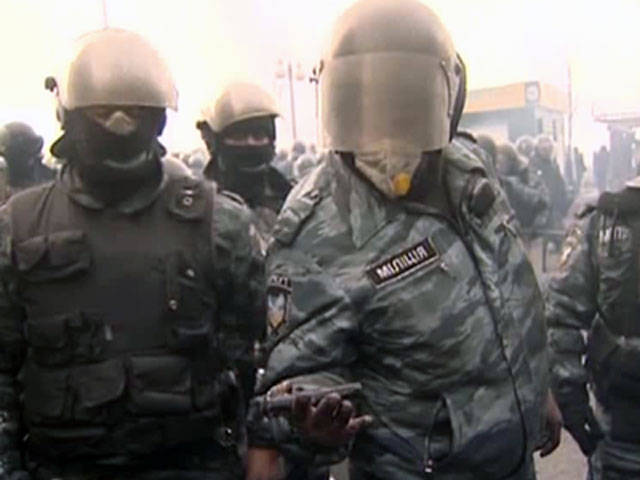 Stones, clubs, bits, sticks with nails, and now also rifles, pistols and machine guns. What stocks weapons radicals of the Maidan possess, it is definitely not known. But it is clear against whom it will be used. It becomes obvious: those who are now shooting at the “Golden Eagle” have undergone special training.
The cobblestones are still in progress, but this is, one can say, yesterday compared to the new outfit of the Maidan militants. Ahead are still extremists with incendiary grenades and fittings, but someone from behind their back shoots Berkut fighters, and at the same time civilians - the bodies of the dead can be passed off as new victims of the regime. Creepy shots that have flown around the world: a soldier of Ukrainian special forces lost an eye. Opposition supporters do not even think to save him: “What an ambulance ?! Yes, this is the Golden Eagle!” - voices are heard behind the scenes.

And here is the proof. In the video - a militant with an army sniper rifle in his hands. Firing, and clearly not on the lanterns and not in the air. The more victims, the stronger the mutual hatred; what the radicals are so eagerly seeking.

“Western Ukraine says we received weapons. They did not receive weapons, they simply broke into military units and seized weapons. If these weapons come to Maidan, there will already be dozens and hundreds killed and wounded,” says Sergei Goncharov, president of the international association special forces "Alpha".

The murder weapon was found even in the trunk of the car of the deputy of the Rada from the Batkivshchyna party Sergey Pashinsky. From Maidan, he takes out a sniper rifle with a silencer, a weapon that is used by special forces. Opposition supporters inspect the contents of the trunk and release the people's choice. There is one more innovation, relatively recently appeared in the militants - homemade grenades.
"Military weapons - it differs not only in the system, constructive, but also in ammunition. If it even matches the caliber, then
m are used other cores that are able to pierce various obstacles. If this business flew through warm clothes, through body armor, then military weapons were used, - comments Andrey Klintsevich, an expert on special equipment, - they use ball grenades: they take bearings of different diameters, take large fireworks, put them on and get some kind of grenades, which can cause very serious injury at close range. "

Also in the course of lead and metal cores, including for throwing from homemade slings, filled with fireworks and striking elements. The participants of these new gangs are much fiction.

Another scary picture is that activists of Maidan shower the armored personnel carrier with Molotov cocktails. “Definitely, the people who threw these grenades understood that the employees sitting inside could die. Because the amount of liquid that falls between the hatches goes anywhere. An instant fire that can instantly detonate and explode the ammunition in the tower , and people could die. That is, people deliberately went to the fact that they kill, "- explains Klintsevich.

At the same time, instead of a frantic crowd and chaos - clearly managed people who have been trained. Maybe not a special professional training, but still minimal. In addition to this, they have army gear. The appearance of the opposition fighters has changed dramatically in two days. If they were previously in some kind of protective clothing, head-protecting elements, with shields, now they have the so-called unloading - unloading vests, which include smoke grenades, which are in service with the Ukrainian army. There was also a specialized connection.

In the hands of extremists, many civilian weapons are traumatic pistols, often converted into a live cartridge, air rifles, hunting rifles and carbines. "This, apparently, carbines with rifle cartridges. Maybe this is a small-caliber cartridge," the expert continues, "This gun is definitely reworked. This is something that disperses sound, maybe a completely muffled shot. Apparently, the barrel here redone, on a professional slang - “perestvol.” Starting, firing caps, but it is completely military weapons, for this it was necessary only to replace the barrel. It can be seen that the person definitely prepared for this situation - he has special ballistic glasses that protect they have eyes, including from a shot that flies out of a smooth-bore gun. He has a radio station and grenades. "

Por Sergey Goncharov said, "it was a long preparation. Yes, there are civilians there, but these are extras who came to watch, watch, attend, but no more. The majority of people are those who came to fight. Already sniper rifles , military weapons, body armor. And what they did with the same armored personnel carrier - they burned it - this is war or the beginning of war. " "It seems to me that Berkut is now, plus internal troops - this is the only force that can somehow stop this agony. What is happening now is a provocation to ruffle the Berkut standing on the dividing line, who is trying to preserve the feeling and not to cross the line of anger. I assure you that the Golden Eagle are trained people, and if they received an order to clean up, in a short time the Maidan would have been trimmed, and the victims would have been much less than what is happening now on the Maidan, "- adds" alpha sheep. "

Despite all the aggression and excessive cruelty on the part of extremists, law enforcement agencies still did without military weapons. Now it will be issued to them according to one of the last orders of the leadership of the Ukrainian Ministry of Internal Affairs. The leadership of the security agency explains that military weapons will be used within the framework of the law "On Police" to "protect citizens from attacks threatening their lives and health, as well as to free the hostages. And, of course, to repel attacks on a police officer or his family, that in Kiev and other cities of Ukraine happens every hour more and more often.

Ctrl Enter
Noticed oshЫbku Highlight text and press. Ctrl + Enter
We are
Results of the week. “Take off your hats! Expose the head! The body will be taken out now! ”New rifles V. Lobaeva
Military Reviewin Yandex News
Military Reviewin Google News
32 comments
Information
Dear reader, to leave comments on the publication, you must sign in.