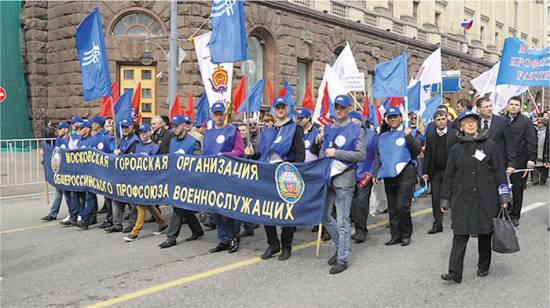 The All-Russian Professional Union of Military Personnel (OPSV) is one of the few public organizations in Russia that has significant authority both among the military personnel of the army and fleet, and in Russian society as a whole. OPSV through a network of more than 70 regional organizations located in almost all regions of Russia where military garrisons are located, defends the interests of not only members of the organization, but also all those for whom military service has become a profession, as well as military pensioners and members of their families.

On some of the plans of the organization for the further social protection of people in uniform and veterans, the strengthening of civil society institutions in the Armed Forces to military observer Vladimir MUKHIN tells the chairman of the Central Committee of the WWTP Oleg Shvedkov.


- Oleg Konstantinovich, recently the OPSV and the Main Military Prosecutor’s Office (GVP) signed the Agreement on Cooperation and Interaction. What caused the signing of this document?

- This practice of our interaction with GWP has existed for a relatively long time. With the department, which is headed by Chief Military Prosecutor Sergey Nikolaevich Fridinsky, we have close contacts in matters of the legal protection of military personnel and military retirees since 2009. Then we signed the first agreement with the Chief Military Prosecutor's Office, and it played a significant role in strengthening the legal protection of servicemen and lagging their social and civil rights. For example, only our executive committee of the Central Committee of the OPSV over the past four years, more than 200 once applied to the MAG with the request to apply prosecutorial measures to various violations of the rights of military personnel by the authorities, command, etc. An order of magnitude more such appeals were sent by our regional organizations. And, of course, after such interaction with representatives of the military prosecutor’s office, we had, as a rule, an effective result.

Here I want to note that our appeals to the prosecution authorities are the last, as they say, extreme measure, the provision of social and legal assistance to military personnel, military retirees and their families. As a rule, if we receive signals, requests for help from military personnel, residents of garrisons, we first try to resolve problems at the command level and the garrison authorities and local governments. If there is no positive reaction, then we appeal to the address of the higher command. And only after some time, when we see that our signals do not bring results here, we appeal to the prosecution authorities in order to try to restore justice and establish due order by the force of law.

Interaction with GWP is not only joint protection of people in uniform, informing this structure about those or other violations of laws in the army and navy. But this includes joint work in the provision of legal assistance to military personnel, the exchange of experience, the joint development of proposals for improving certain social and legal aspects of military legislation, etc.

- What are the problems citizens apply to OPSV?

- Mostly they apply and people have previously contacted us on housing problems. This is about 80% of all hits. A large number of complaints were received about the arbitrariness of individual commanders and superiors. And to bring order here, of course, it is important to interact with the military prosecutor’s office.

- Now, after the adoption of the law on the military police (OPSV), these structures will be engaged in maintaining order in the garrisons and military units. Are there any plans to sign any documents on cooperation and collaboration with the EaP bodies?

- The General Directorate of the Military Police is known to be included in the structure of the Ministry of Defense, and its head is personally subordinate to the Minister of Defense. Therefore, now we would like to first of all update our cooperation agreement with the military department. We sent the corresponding draft document to the head of the Ministry of Defense Sergey Shoigu. And sent a relatively long time. But no answers, no reaction to him yet.

- And how effective is the cooperation between the OSPF and the Ministry of Defense? If you recall, for several years you, Oleg Konstantinovich, were a member of the Public Council under the Ministry of Defense. Then for some reason they took you out of it. How do you really interact with the military department, military authorities in the regions of Russia?

- I'll tell you straight. Of course, we strive for maximum efficiency in our relations with the command of the Armed Forces and the leadership of the Ministry of Defense. And they are simply forced to contact us, because the questions we pose to them concern specific problems, people, etc. But we are aiming for more. We want to work with army structures on a system basis. And that is why we are seeking re-signing of an agreement on cooperation and cooperation with the new leadership of the Ministry of Defense. The cooperation agreement, signed when Sergey Ivanov, the Minister of Defense, was outdated.

It would seem that military leaders are ready to cooperate with representatives of civil society, which they have repeatedly stated at all levels. After the arrival of Sergei Shoigu to the Ministry of Defense, a new composition of the Public Council was formed. But a great return from the work of this body, in the opinion of a large military community, is not yet observed. Unfortunately, the system of civilian control over the Armed Forces still does not work in full force. Many public organizations dealing with the problems of military personnel were left behind in productive cooperation with their native ministry. That is why I, at the last meeting of the Coordination Council under the chairman of the Federation Council of the Federal Assembly for the Social Protection of Military Personnel, Law Enforcement Officers and Their Family Members, suggested that all public structures working in the “military environment” create a single coordinating body. In any case, we, as a “military trade union”, intend to work with the Ministry of Defense constantly, as they say, in working mode - there is a specific problem, we solve it together.

There are definite results for OPSV here, especially at the regional level ... We have agreements with the command of more than 40 of major associations and unions, republican and regional military enlistment offices. OPSV helps them in organizing military patronage work and working with veterans. And they, in turn, contribute to the implementation of the requirements of OPSV in protecting the rights of servicemen. But in some places the commanders simply turn away from us. Because we are uncomfortable. We, unlike many organizations, do not just raise real problematic issues and strive to solve them, but by the whole arsenal of our measures we force them to solve. Not everyone likes it, and if you remember history with my participation in the Public Council of the Ministry of Defense of the Russian Federation, I now state that as soon as tough criticism of the leadership of the military department was heard from my mouth, I was quietly removed from this body. We are not always comfortable ...

- We are trying to defend the specific rights of servicemen. Unfortunately, they have many responsibilities, but few rights. For example, for several years already, the OPSV has been proposing the Russian Ministry of Defense to change the system for concluding a contract with a military man with the military department. The contract should contain all benefits, compensations and other preferences, as well as the responsibility of the department for their implementation. This will make it impossible for the ministry and the state to modify at its discretion benefits to servicemen during the term of the signed contract. This practice exists in all civilized countries. For example, the list of benefits of military personnel in a contract with the Pentagon for military service takes about 40 sheets. In the Russian army, the contents of the contract with the Defender of the Fatherland fit into one and a half leaves. For some reason, the Defense Ministry does not even consider this proposal.

Commanders and commanders react painfully when our trade union activists raise the acute problems of, say, feeding the servicemen, providing them with warmth, when we present concrete facts of non-statutory relations in the army and the navy.

- And what needs to be done to increase the effectiveness of the CRPD?

- In my opinion, it is necessary to pass the law on military trade unions as soon as possible, or at least amendments to existing legislation explaining the creation and activities of trade unions of military personnel in military units. In principle, no one forbids us to work, to protect the rights of servicemen. The basis for such activities for us is Article 30 of the Constitution of the Russian Federation, which states: “Everyone has the right to associate, including the right to form trade unions to protect their interests. Freedom of activity of public associations is guaranteed. ” An important tool in our activities is the Federal Law “On Trade Unions, Their Rights and Guarantees of Activities”, in Article 4 of which the existence of military unions of military personnel is enshrined. But to date, there is no complete specifics, normative base for the functioning of OPSV in the Armed Forces of the Russian Federation.

After amending the end of 1990-ies in Article 9 of the Federal Law “On the Status of Military Personnel”, it defines the right of military personnel to join a trade union. Based on this, in 1997, we prepared a draft law “On trade unions of servicemen”. At the same time, a similar bill was prepared in the Professional Union of Russian Military Forces, headed by the ex-Minister of Defense of the Russian Federation, Igor Rodionov. After numerous amendments, the bill reached the second reading, but was never passed. The only adversary is the Ministry of Defense of the Russian Federation. All the rest of the security forces supported. This is what exists today as regards the legal incompleteness of the legitimization of the activities of OPSV within military units.

- President Vladimir Putin, speaking to the Federal Assembly, said that trade unions and organizations protecting the interests of professional and social groups should be actively represented in the work of the Public Chamber. Will the FPRA nominate their representatives to the new chamber, which should begin work in July 2014?

- This is, of course, a good platform for defending the civil rights of servicemen and their families. And we will try to at least our regional organizations in the new membership of the Public Chamber be represented. In my opinion, there are real opportunities, for example, that Yury Tarlavin, the head of our Primorye organization OSPV, be nominated to the PF. There, in the Far East, as a military trade union leader, he enjoys deserved prestige not only in military units, units and garrisons, but also among representatives of civil society in the Primorsky Territory. A similar authority has the head of the Tula organization OPSV Nikolay Melnikov. As for me, the Central Committee of the OPSU has not yet decided to nominate my candidacy or any other representative of our trade union to the new membership of the OP on the new system of its formation. Here, as you know, you can get through the Internet voting on the website of the Russian Public Initiative, during which 43 members should be elected to the Public Chamber. But many in Russian society do not trust the results of such online voting. Since it is still impossible to control the objectivity of the vote, completely eliminate cheating and conduct an honest, transparent vote count.