The militants have no choice, except for the war in Ukraine - any power will crush them

February 22 2014
123
These are my personal observations, with all the ensuing consequences.


So, acting forces. The first is the people of Ukraine, who strongly dislike the power that has taken shape in 25 years, which, with its theft and complete lack of responsibility, brought the country to the handle. At the same time, the political views of the people have a fairly wide spectrum, from the ultranationalist - in the west, to the frankly pro-Russian - in the east and south. But in dislike of the “regime” almost everyone is united. The main weakness of this force is the complete absence of any institutionalization. Can only express a naked protest. 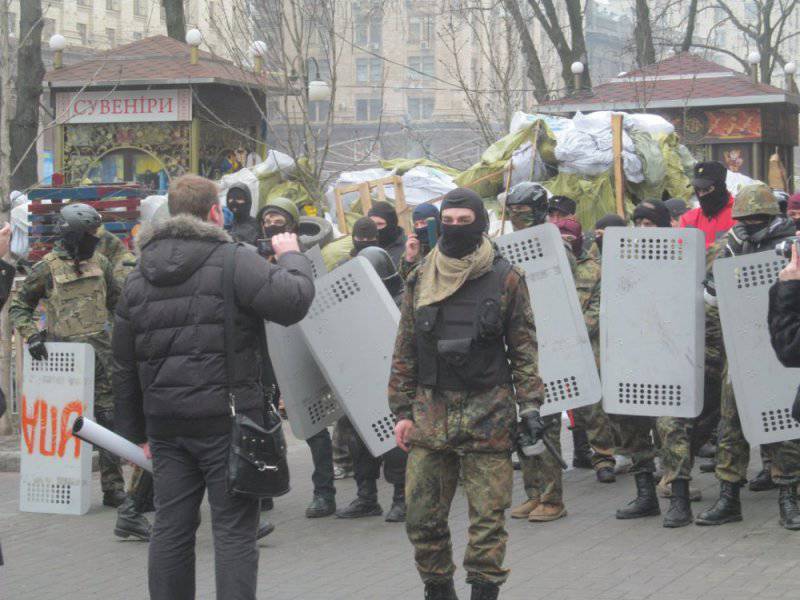 The strength of the second - the Ukrainian elite. It is divided into several groups, but its main general characteristics are a categorical denial of responsibility to society, a focus on the European Union and a fear of the monopoly of one force. As soon as someone from the elite (“oligarchs”) gets too strong, all the others unite against him. The apparent bias in the “Zapadnichestvo” with the fascist-Galician bias is a consequence of the traction in the EU, since the alternative direction to Russia causes horror of the Ukrainian elite (“They will take everything away!”). As a result, there is a clear bias in the country to the ideology that was initially supported by a rather insignificant part of the country. In economic terms, it has remained extremely small, but two decades of propaganda have raised a new generation, which is quite loyal to these ideas.

The third force is external. This is, first of all, the US Embassy and the NGOs headed by it, including those who are training militants. It is guided by the main rule: anything, just do not allow the rapprochement of Ukraine and Russia. There is a serious influence group in Poland, its main task is to gradually prepare a return of that part of Ukraine, which in the Middle Ages was occupied by this country, under its control. The role of other EU countries and Brussels is generally much smaller, and usually they are adjacent to Poland or the United States.

Important note: the influence of Russia on the events in Ukraine is minimal, it is institutionally almost zero.

Next is my vision of the situation. The current "Maidan" began on the initiative of two forces. The first was the people from whom they took away the last hope for a dramatic improvement in life, for joining the EU. True, in a few days it became clear that this was not an introduction, that the contract was bonded, that it was impossible to sign it, and this greatly weakened the activity of the people (that is, not engaged by other forces of its part). Nevertheless, it was originally ordinary people who came to the “Maidan”. But the “oligarchs” provoked them, and that’s all. Yanukovych hoped that he would use “Maidan” against Putin’s pressure (which is a good commercial negotiator, and Ukraine urgently needed money, which, by the way, it partially received). Other oligarchs - that they will be able to weaken Yanukovych, who began to monopolize power in the country. It is for this reason that at the first stage, Tymoshenko was mentioned, who then completely dropped out of the game.

At this stage, the active parties (oligarchs and Yanukovych) were ready to negotiate, and Yanukovych had some trump cards (money from Putin, willingness to let go of Tymoshenko, funding for militants in Galicia, the possibility of continuing negotiations with the EU), and the oligarchs had others (US support and EU, the activity of the people, the activity of nationalists, and so on). I suspect that they almost reached an agreement (this is evident from the fact that at a critical moment, when there were a lot of people on the Maidan, the opposition refused to take power), but then the Americans said their word. They threw into the battle the militants who had been trained for many years (with the consent, by the way, of Yanukovych).

The question is why? It seems to me that this is due to the arrangements of Yanukovych in Beijing. The task before the United States got up - to remove it at any cost. But at that moment, representatives of the EU intervened, who fear the collapse of Ukraine and the civil war (they will soon have it too, and they don’t want to see a bad example) and began to demand peaceful negotiations. At the same time, the oligarchs and opposition leaders (Yatsenyuk, Klitschko) were absolutely not going to fight to the end, they were fully prepared to stop under the conditions of restricting Yanukovych’s power (so that he would not exterminate them in a commercial sense) until new elections. And before the 16 number, the amnesty law, everything was relatively quiet, backstage talks were being held.

But then two things happened. The first is the publication of the conversation by Nuland, who sharply weakened support by the European Union (Germany, first of all) for US actions. Again, the latter wanted to disavow decisions on China or, ideally, remove Yanukovych, and the EU is not at all so brutal. The second is the entry into force of the amnesty law, under which the militants did not fall. In addition, almost all of them were “lit up,” and the agreements between oligarchs, opposition leaders and Yanukovich did not leave room for them on this “celebration of life”.

There is another subtlety. They were prepared under the same scenario as the militants in Libya, Syria, Egypt ... That is, like cannon fodder, as a consumable, for replacement. If it does not come out in Syria, we will go to Egypt or Afghanistan ... The period of their life is months, not years. But Ukrainian nationalists do not want to die, they want power and a full life. They understand that if they do not leave Ukraine (and where? To Syria?), Here they will get their power, and any power, no matter who sits there in the presidential palace. They have no other chance but to take power.

There is another subtlety. No one except the east and south of Ukraine, who are tired of the dictatorship of Galicia (and redistribution in its favor of the budget), do not want federalization or disintegration of Ukraine. The EU does not need this, the oligarchs do not need this, the Westerners do not need it (who will feed them). The latter, in their moderate form, are even ready to join the Customs Union, but only all of Ukraine and on condition that they will control Kiev. But now the militants (and the youth supporting them) are beginning to like the disintegration scenario more and more. Because in their Galicia they will be in relative safety.

Note that I hardly mention the people in the last paragraph. This is understandable - he understands more and more that he has become the object of manipulation and any of his activities are used by some oligarchs against others. In other words, the activity of the people leads to the fact that the system remains the same, only individual actors change. The people, naturally, do not like it - and its activity gradually decreases.

As a result, today the situation is as follows. Militants will fight to the end - and they are ready to ignite a civil war that will ruin the country. They will not compromise - no one will talk to them, they have no other chance to survive. At the same time, the level of their demagogy, with which they will again engage people in a clash, will only increase. Most likely, it will affect a part of young people - to her distress. This activity is not very convenient for the United States (they have enough hot spots on the world map without it), the EU is absolutely not happy with it, and the Ukrainian oligarchs are afraid of it. The opposition leaders look extremely pale - they cannot influence these characters in any way, they are considered traitors, and not without reason. By the way, atrocities against prisoners are a consequence of the objective situation, since the leaders of the militants cannot agree with anyone, they must bind themselves by mutual responsibility, through blood. A pretty typical situation.

If they are dispersed in Kiev, they have enough strength and caches with weaponsto support the Bandera partisan throughout Ukraine for many years. And, I repeat, it is impossible to stop them, they don’t have to go back, in a more or less peaceful situation all power will just kill them all. Some of them will be able to “hide” in “hot spots”, some will be able to sell themselves to the authorities, but as a single force they are doomed in conditions of peace. The only thing they can agree on is the creation of a separate state, a conditional “Galicia”, in which they will be power.

It seems to me that all their terror will now be aimed at forcing all the political forces of Ukraine to agree to this scenario. Since they themselves cannot voice it, not being a legal political force in Ukraine and not supported by the main players in the political field of the country, they can only create unbearable conditions for everyone else until their wishes are fulfilled. They will not be able to capture the whole country, the forces are too little, but they can try to snatch a piece a little larger than Galicia itself.

As their war becomes more and more partisan, the support of the people will not be as principled for them as it is now, when you need to make a fire, but since the standard of living of the population will fall, they will have some kind of support sufficient for guerrilla war. And from the point of view of this analysis, the future of Ukraine seems to me rather sad. And God forbid that I was wrong.