Lavrov presented a bouquet of accusations to the West because of Ukraine: double standards, perverted information 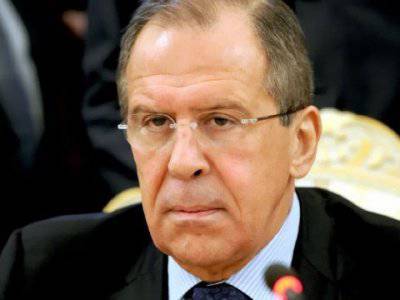 Lavrov presented a bouquet of accusations to the West because of Ukraine: double standards, perverted information.


While the European Union continues to discuss possible sanctions against Ukraine and measures to influence Ukrainian officials responsible for the escalation of violence, Russian Foreign Minister Sergei Lavrov broke out in a speech addressed to the EU and the US, bringing a whole bunch of accusations to the West.

"Our Western partners - in Europe and the USA - are laying the blame on the country's authorities and do not qualify the actions of extremists as they should be," and Russia is very worried, Lavrov said at a press conference in Baghdad. “Because there are double standards, and instead they threaten with sanctions, not only threaten, but the Americans have already introduced, and thus create an additional incentive for the opposition to uncompromising,” Interfax quotes the head of Russian diplomacy.

“The goal - to impose, in essence, this choice on the Ukrainian leadership - is also noticeable in the initiatives that are being put forward: the requirement to hold parliamentary, early presidential elections as soon as possible, to form a coalition government, that is, they are actually already trying to predetermine them”, - the minister said.

“Special surprise” in Moscow is caused by recent statements from Washington regarding the situation in Ukraine, in particular, the statements of the American representatives that “they, they say, do not understand Russia's position or do not know what Russia is saying to Ukrainian representatives,” Lavrov added .

The Russian position on Ukraine is very clear, and Moscow speaks about it publicly, Lavrov stressed. “Our position is that all external players, as well as the Ukrainian opposition, must decisively and urgently dissociate themselves from extremists, other radicals, anti-Semites, must be done unequivocally and reinforce their words with concrete deeds,” the minister listed.

Earlier, the Foreign Ministry of the Russian Federation has already called the aggravation of the confrontation in Ukraine "a direct result of the policy of connivance on the part of those Western politicians and European structures who, from the very beginning of the crisis, turn a blind eye to the aggressive actions of radical forces in Ukraine, thereby encouraging them to escalate and provoke legitimate authority. "

Among other things, in Moscow, "deeply" are concerned about how what is happening in Ukraine is served in the Western media, Lavrov said in Baghdad. “The situation in the Western media is presented in an extremely perverted form,” the minister stressed. “Simple formulas like“ The West urges the government not to touch the Maidan, ”although they prefer not to talk about Maidan.”

At the same time, the Western media, according to Lavrov, keep silent about the facts of violence against the governors in various regions of Ukraine, as well as facts related to attempts to seize armory warehouses, call on the exclusively government side to stop violence against peaceful demonstrators.

"In reports from the scene in the Western media you can hardly find any mention of such an organization as the Right Sector, which openly declared that it would not cooperate either with the government or with the opposition, and in general this movement will act in such a way that it considers it necessary. And they act by radical extremist methods, including the regular use of force, "said Lavrov. At the same time, “the opposition cannot or does not want to dissociate itself from extremists,” the Russian foreign minister added.

Ctrl Enter
Noticed oshЫbku Highlight text and press. Ctrl + Enter
We are
The action “Military service under the contract is your choice!” In Rostov-on-Don: future contract servicemen, exhibitions and “Russian Knights”
Military Reviewin Yandex News
Military Reviewin Google News
124 comments
Information
Dear reader, to leave comments on the publication, you must sign in.