Ukraine: point of no return 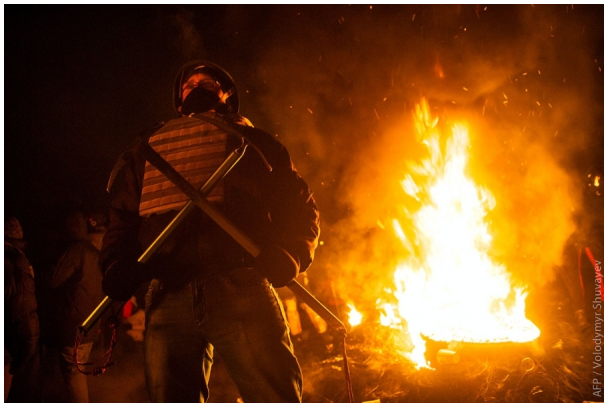 No matter how sad it is to realize, but the events in Ukraine began to develop according to the worst scenario: the residents of Kiev heard the crackling "Kalash." Soon they will learn to distinguish the AK from the PKK by sound and understand the difference between the APC and the BMP.

It is already obvious to everyone that there is an armed insurrection in Ukraine. The goal is to seize power, so it is absolutely pointless to conduct any negotiations with the opposition, especially now, when every day it gains points. No signed agreements are respected. Every hour of truce for the purpose of negotiations is used by the opposition to regroup forces and mobilize resources.

President Yanukovych has practically withdrawn himself and let the matter take its course, hoping that the crisis will resolve itself. The correct decision on the possibility of use of combat weapons too late. Kiev is given to plunder marauders and militants.

The picture would be incomplete if we did not mention the position of the West. In a situation where real street battles are taking place in the center of the city, the White House calls on Yanukovych to remove the siloviki from Kiev. The UN Secretary General in a special statement in connection with the events in Kiev, recalls the need to respect human rights (?). The question involuntarily creeps in: “Is this a mockery or a provocation?”

No, and not that, and not another. The representatives of the EU, represented by the foreign ministers of Poland, France and Germany, who yesterday visited Kiev, voiced their proposals for resolving the crisis, or rather, their requirements: create a transitional government, carry out constitutional reform, early parliamentary and presidential elections. Here you have the answer to the question of who and why all this started. And so that Vitya Yanukovych thought well before giving an answer, the EU froze the accounts of "individual Ukrainian politicians." I am ready to put a silver dollar, that Yanukovych is the most “separate” of all Ukrainian politicians.

Remark: according to information on 23: 30 in Kiev, the Verkhovna Rada adopted a resolution on the withdrawal of all military formations from Kiev and other cities. Let's call things by their own names: this is unconditional surrender. Yanukovych regime fell.

Kiev is not all of Ukraine

Today, all attention is focused on Kiev, but the capital of Ukraine is just one city. Will the militants be satisfied with this valuable prize? Of course not. As Lenin, the leader of the world proletariat, said, “defense is the death of an armed uprising”. From Ilyich or from another teacher, but this truth is familiar to the Maidan militants.

The airborne groups of “peaceful demonstrators” had already appeared earlier in the eastern and southern regional centers of Ukraine, and, having received a rebuff, moved away home. Soon they will surely appear there again, only this time they will be armed not with bats and chains. The seizure of police departments, attacks on military units legitimized the presence of weapons from militants. Now, not hooligan gangs will go east and south, but military units.

By the way, what is the situation in the eastern and southern regions?

East is a delicate matter

And in the east and south of Ukraine, the “Ukrainian Front” hastily formed, with its headquarters in Kharkov. Headed by Mikhail Dobkin, Chairman of the Kharkiv Regional State Administration. February 1 in Kharkiv passed the constituent assembly, more than 50 public organizations and parties joined the movement. Dnipropetrovsk, Kharkov, Donetsk, Lugansk, Nikolaev, Odessa, Kherson and the Crimea remained along this front line.

20.02.2014, yet before making BP of the decision to withdraw troops from Kiev, Dobkin gave the command to return the Kharkov military, sent to Kiev, back. He did not just return the soldiers from the doomed city (and he was right, after a few hours the city was sent to the slaughter), he withdrew himself from the subordination of presidential power.

Now it is clear that any order from Kiev Kharkov will be viewed through the prism of their interests. And not necessarily a decision will be in favor of Kiev. Thus, the mayor of Kharkov, Gennady Kernes, said that in the event that supporters of Maidan were to speak in Kharkov, the “demonstration” would be harshly suppressed within an hour.

Of course, besides the big players, there are smaller figures on the political field. In Odessa, about a hundred young people in masks, helmets and bats arrived at the administration building, where supporters of Maidan gathered. Young people broke through the police chain (Odessa maydanshchiki tried to hide behind the backs of the officers of the power organs so hated by them) and ... These shots are hard to watch: flashing bits, blood, people's cries, hysterical cries of women leave an impression. Bestial cruelty Kiev maydanovtsev spawned the same beast.

Let's try to look a little bit ahead. As with weather forecasters, in politics, the more distant the forecast, the more likely the error. But we still try.

Hopefully, it will do without a full-scale civil war, and the clash of Ukraine’s East and West will be limited to a mere demonstration of power. Neither Germany, nor Poland, nor Russia are interested in having a country leading a civil war at their side, and therefore they will try to push each side to some kind of compromise.

In this situation, the Ukrainian Front will “knock out” for itself the maximum degree of independence. Depending on what kind of fist he manages to gather in a short time, the conversation will be about autonomy, federation or full separation. If the Federal Republic of Ukraine (FRUkt) appears on the political map, the division of the country will become only a matter of time. 2014 year even more dilute the already far from each other, East and West, and the farther, the more they will diverge.

The middle part of Ukraine, which will be under the “Galicians”, is not very lucky. In all institutions will appear portraits of Bandera, which will return the title of "Hero of Ukraine", the UPA soldiers will become an example for young people. On the pedestal, instead of the overthrown Lenin, a figure of Skoropadsky will be installed, Shchorsa will replace Petlyura, and instead of the Unknown Soldier under the Eternal Flame the remains of an unknown soldier of the SS division “Galicia” will rest. Children of Russian-speaking residents of Kiev, brought up in a new spirit, will speak with their parents in the Ukrainian language.

As for hopes for the future prosperity of Ukraine within the EU, they are unlikely to come true.

God forbid that I was mistaken. 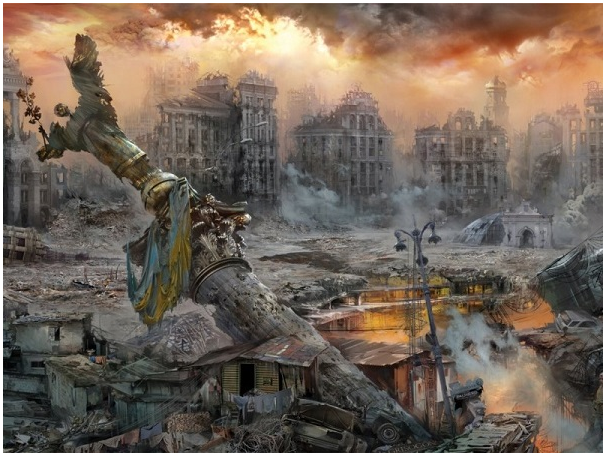 Ctrl Enter
Noticed oshЫbku Highlight text and press. Ctrl + Enter
We are
The Kalashnikov Concern is working on the RPK-400 machine gunSituational analysis of the death of the MH17 flight (Malaysian Boeing 777), made on the basis of engineering analysis from 15.08.2014
Military Reviewin Yandex News
Military Reviewin Google News
209 comments
Information
Dear reader, to leave comments on the publication, you must sign in.