February 21 2014
7
From 11 to 16 in February, Singapore held the world's third largest air show, called Singapore Airshow 2014. In its scope, it is second only to air shows, which are held in the UK and France. The total area of ​​pavilions and platforms of the air show in Singapore is 24 hectares. For the static parking of exhibits of the salon, located near the chalet and pavilions, the area of ​​90 000 square meters is allocated, the area of ​​the pavilions themselves is 40 000 square meters. Also on the territory of the air show 200 chalet was broken and a special arena was built for viewers of demonstration shows and flights. The Helicopters of Russia holding and the UAC - United Aircraft Building Corporation took part in the air show, presenting the latest samples of Russian flying equipment.


“A great show is a great opportunity.” This is the topic of the Singapore Airshow 2014 air show. This year, in addition to the main and well-known sections of the defense and aerospace industry expositions, 2 debuted new pavilions - the Army Pavilion and the UAV Pavilion - debuted at the Air Show. Both pavilions represent those sectors that currently show the highest growth rates, especially in the Asia-Pacific Region (APR) in the short and medium term.

Singapore Airshow is dedicated to both the military and civilian aviation. At the same time, like any major air show, it is equally interesting to both ordinary viewers and professionals in the aviation industry and related industries. Every year, world industry leaders take part in its work, who acquaint the public with their latest machines, efficient and reliable defense systems for various purposes. 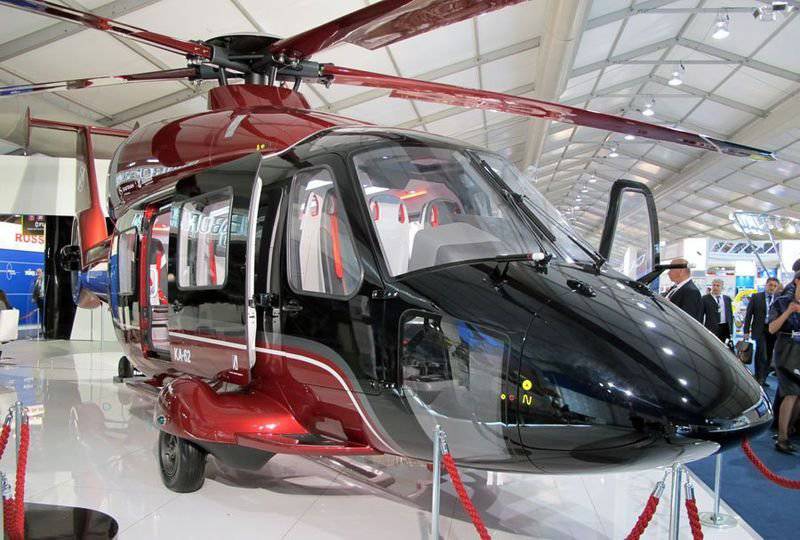 Holding "Helicopters of Russia" expects in the coming 2 of the year to deliver to the APR countries up to 35 various helicopters. Along with the well-proven machines Mi-8 / 17, Mi-26, Ka-32, the Russian holding company is actively promoting its new models in this market, we are talking about the Mi-171A2, Mi-38, Ka-62, Ka-226T helicopters Ansat. Already next year, Russian Helicopters expect to receive certificates for the Mi-38, which has already made its first flight, and the Ka-62, whose first flight is planned for the 2014 year.

Separately, we can note the fact that Ka-62 is the first project in stories Russian helicopter, which is implemented in a broad international cooperation. Companies from Austria, Germany, France and a number of other countries are involved in the project to create this helicopter. The creators of the helicopter are confident that their offspring will be in demand not only in the APR market, but also in all the regional markets that are traditional for a Russian holding. Currently, there are already orders for the delivery of the Ka-62 of the Colombian company Vertical de Aviacion and the Brazilian Atlas Txi Areo. 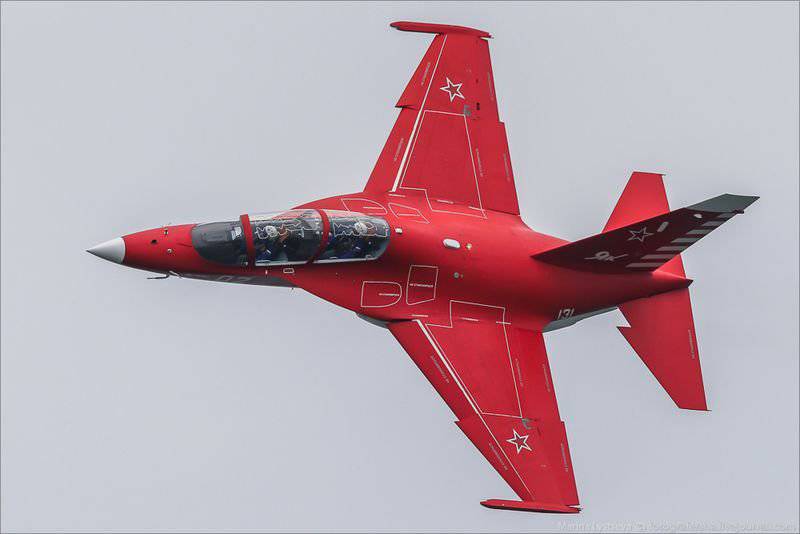 YK-130 at the Singapore Air Show
As part of the air show, the experts of the holding spoke about the Ka-62 at a special conference, which was organized with the direct support of the Embassy of the Republic of Singapore in Russia and the Russian-Singapore Business Council. According to Andrei Bohinsky, who holds the post of Director of the Aviation Industry Department of the Ministry of Industry and Trade, in 2015-2016 years we can expect the start of active sales of the new Russian helicopter industry. Also within the framework of the Singapore Airshow, the holding company Helicopters of Russia held a conference, which was intended for operators of Russian military equipment. This conference dealt with the Mi-8 / 17 multipurpose helicopters, the Mi-35М transport-combat helicopter and the Ka-52 “Alligator” attack helicopter.

It is necessary to emphasize that the Asia-Pacific market is very promising for Russia. Currently, many Asian countries are very actively exploiting Russian helicopters, airplanes, air defense systems, various naval equipment, as well as weapons and equipment of ground forces. So, at the moment, domestically produced helicopters are successfully used in such countries of the APR region as Vietnam, Guinea, Indonesia, Cambodia, China, Laos, Malaysia, Mongolia, Myanmar, Nepal, Papua - New Guinea, Republic of Korea and Japan. At the moment, only Russian-made civilian helicopters in the region have more than 150 units. In countries such as China, Vietnam and the Republic of Korea, specialized centers for servicing Russian helicopters have been opened.

At the end of 2013, it was Asia Pacific countries that became the largest importers. weapons from Russia, making up in aggregate more than 40% of all domestic military products that were exported. Rosoboronexport has trust and long-term relationships with the majority of partners in this region. At present, the military-technical cooperation of the Russian Federation with the states of the Asia-Pacific region involves the supply of spare parts, after-sales service of Russian military equipment, as well as the arrangement of service technical centers and joint ventures. 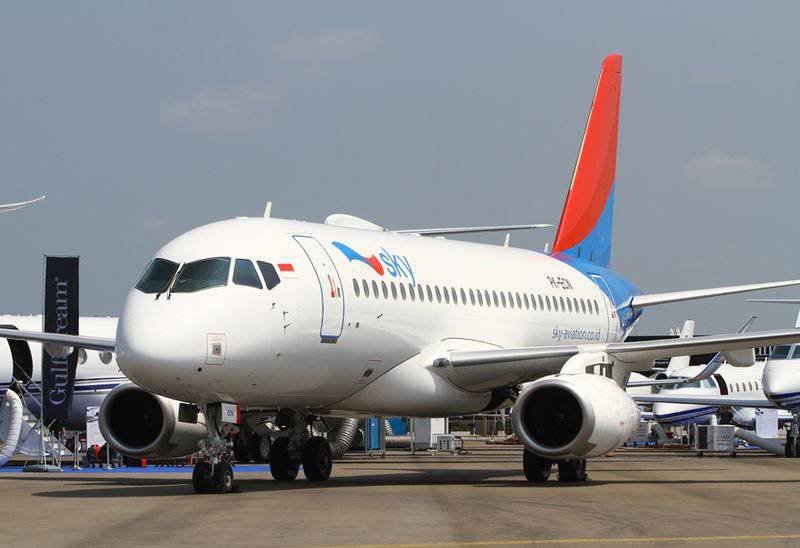 Sky Aviation Sukhoi Superjet 100
In addition to Russian Helicopters, a UAC delegation led by Mikhail Pogosyan took part in the Singapore Airshow 2014 air show. The products of the Russian corporation were represented by both military and civil aviation aircraft. For example, the Russian combat-training aircraft Yak-130 and passenger short-haul aircraft Sukhoi Superjet 100 for the first time participated in the Singapore cabin. The rest of the Russian aircraft were presented in Singapore mock-ups.

Currently, the UAC recognizes the states of the Asia-Pacific region as one of the most promising for the promotion of Russian civilian products. Mikhail Pogosyan, president of UAC, noted that in the coming 20 years in this region of the world more than threefold growth in air traffic is forecast, as well as the world's largest demand for new aircraft - up to 35% of the total global demand for aircraft .

At the moment, UAC is actively promoting commercial aircraft of its own design in this market. Sukhoi Superjet 100 passenger aircraft have already been successfully used on Indonesia's aviation routes (supplied by 3 from 12) and Laos (delivered by 2 from 6). With its SSJ100 aircraft, the Russian company expects to occupy about 15% of the Asian aircraft market in the capacity segment from 61 to 120 passengers. At the same time, the company expects to occupy at least 21% of the Asian-Pacific market in the segment of single-body liners with a capacity from 5 to 120 passengers with the promising Russian passenger aircraft MS-200. 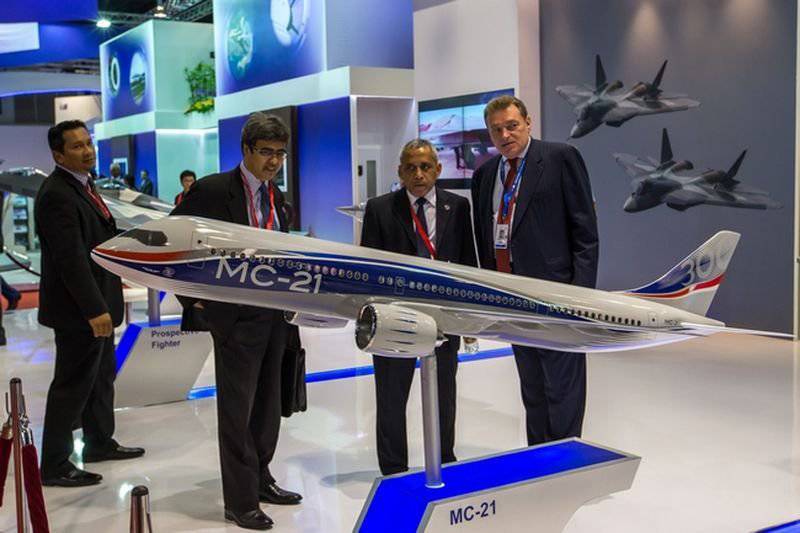 It is reported that over the past 20 years, the states of the Asia-Pacific region, including Vietnam, India, Indonesia, China, Malaysia, Myanmar and others, have been supplied about 400 MiG and SU fighters. Delivery of combat aircraft to a number of countries in the region is also planned for the current year. In addition, work continues with India, which aims to deploy a licensed release of heavy Su-30MKI fighters, as well as the development of a multi-purpose transport aircraft (MTA) and an 5 generation FGFA fighter.

In Singapore, the passenger liner Sukhoi Superjet 100 was presented in a static parking lot. In front of the spectators, a plane belonging to the airline Sky Aviation from Indonesia was displayed. This airline has operated commercial flights on this machine since March 2013. The Russian combat training aircraft Yak-130 presented at the air show a full-fledged flight program. This machine combines a set of all the necessary training and combat qualities, allowing you to train fighter pilots for all Russian and foreign fighters of the latest generations.