The US Navy thinks of a railgun and a laser gun

February 21 2014
16
In the past few years, the US military has often relied on future technologies that are very close to science fiction. So, representatives of the US Navy announced that they are going to acquire the most promising types of weapons in the very near future. First of all, we are talking about the electromagnetic railgun and a powerful laser gun. It is reported that the laser gun will be deployed on one of the ships from the US Navy at the end of 2014, and the tested prototype railgun is planned to be installed on a combat ship over the next two years.


According to representatives of the US Navy, the decision to develop these types of weapons is largely due to issues of economy. Compared to traditional projectiles, bombs and rockets, both technologies are inexpensive and can be fired almost continuously. Captain Mike Ziv, who is the manager of Electric Weapons and Directed Energy Systems under the command of the US Navy, is confident that new technologies will be able to change the methods of combat operations at sea.

In addition to the relatively low cost, the focus will be on the ease of use of these types weapons. Thus, the laser, which is planned to be installed on a warship USS Ponce, can be controlled by only one sailor, and not even the most experienced one. The laser gun is designed to combat the so-called "asymmetric threat" - complexes of high-speed boats, aerial drones, as well as other potential threats to warships, which are now located in the Persian Gulf. 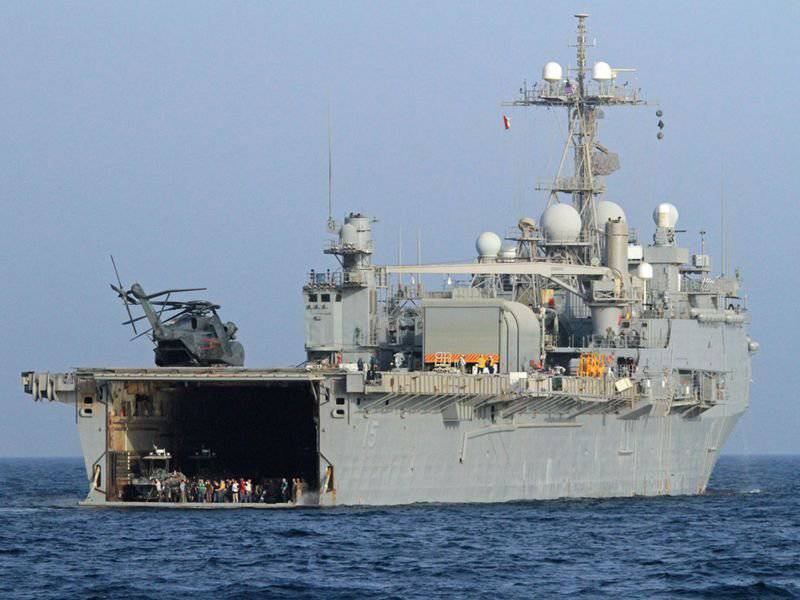 The world's first combat laser on a warship should appear in the summer of this year, reports the agency AP. A prototype laser cannon will be installed on board the American large assault ship "Ponce", which was converted into a special base floating base. It is assumed that the naval-based combat laser beam can hit targets at a distance up to 1,7 kilometers from the ship, mainly the laser gun will be used against asymmetric threats. Ponce serves in a region where the problem of piracy is acute today. It is assumed that the tests of the laser installation will be conducted within a year, after which the issue of adopting a laser gun for service and its mass production will be considered.

According to the available information, the US Navy spent about 40 million dollars to create a prototype laser of a sea-based laser. At the same time, the cost of one shot from such a gun is estimated at just 1 dollars, while launching an interceptor missile costs the taxpayers about 1 a million dollars. In addition, the laser gun has an almost unlimited supply of shots.

Tests of the railgun - a gun that gives the projectile acceleration due to electrical impulses - were carried out in December 2010. These tests were considered successful. New weapons were created with the aim of installing on promising warships of the American fleet. The destroyers of the DDG-1000 Zumwalt project were called as such ships. The railgun tests were carried out on the basis of the Center for the development of surface weapons of the American Navy. The weapon was tested at a power of 33 MJ. According to the calculations of engineers, this power allows you to send an all-metal projectile at a distance of up to 203,7 km, while at the end of the route the projectile speed will be approximately 5 Mach (about 5,6 thousand km / h). 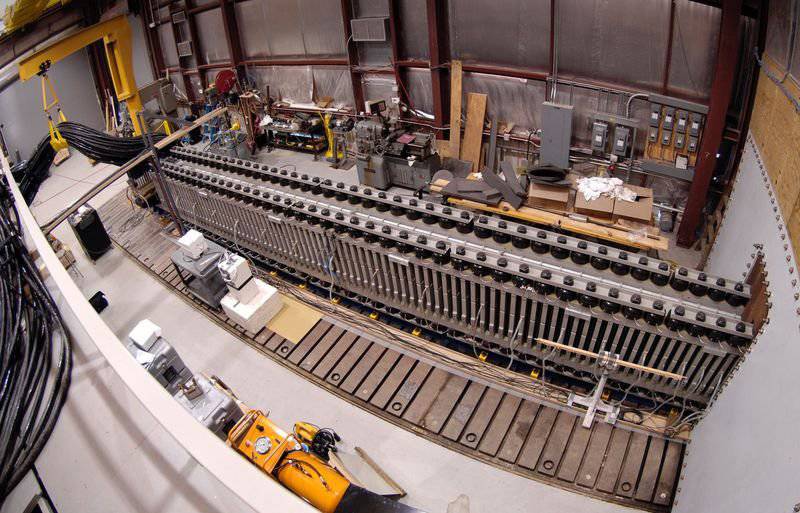 Railgun tested in the USA

2010 year tests were record. Then the power of the railgun in 3 times surpassed the same indicator, which was achieved during the first tests conducted back in January 2008. This indicator, among other things, has become the largest since the development of such weapons in the world. When the US military expects to finish all the work to create this promising type of weapons, it is not known.

A railgun is a cannon that uses electromagnetic force to accelerate a conductive projectile. At the first stage of the shot, the projectile of such a gun is part of the electrical circuit. This tool owes its name to two contact rails, between which the projectile moves in contact with them. At the moment, the use of such weapons on real warships seems impossible. Since a huge amount of energy is needed for firing a shot, shooting accuracy leaves much to be desired. In addition, the tested electromagnetic gun has a very large size.

Currently, both installations mentioned by the US Navy have their drawbacks. For example, lasers lose their effectiveness in dusty or rainy weather (precipitation can greatly harm them), as well as due to the occurrence of turbulence in the atmosphere. At the same time, as noted above, the railgun requires a very large amount of energy for a shot. These shortcomings are highlighted by Lexington’s military analyst Loren Thompson. 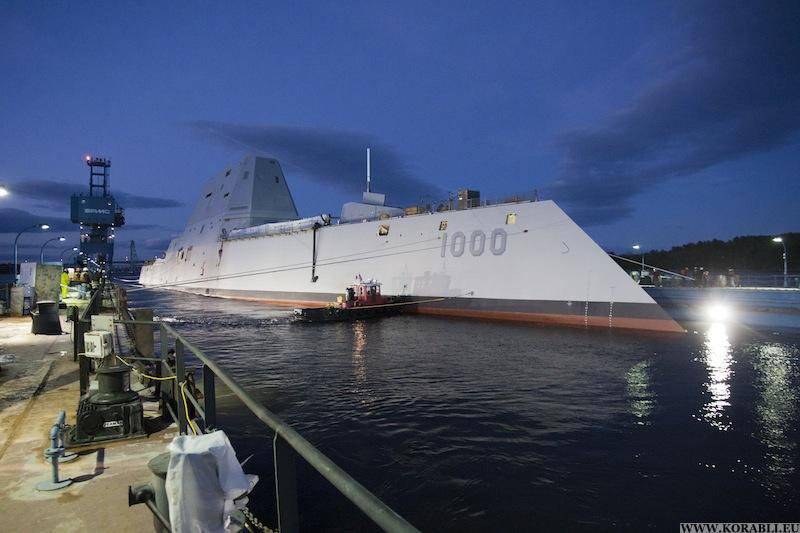 Destroyer of the project Zumwalt. Launched on October 28 2013 of the year

Although rumors are currently circulating that the US Navy was able to find a solution to the problem of bad weather. However, the solution to the problem is not final. With heavy rain or high clouds, lasers still lose their performance. It is not possible to solve the problem of providing the necessary amount of energy for the railgun. The only ships suitable for the use of railguns, so far are the promising destroyers of the project Zumwalt. Currently, only one ship of this type has been launched. Therefore, representatives of the Navy continue to hope for modern development, the benefit of the time is still there. American engineers are already working to develop a system of batteries for storing sufficient quantities of energy, which could be installed on ships already built. With all their flaws, new types of weapons are significantly cheaper than existing counterparts, which makes them very attractive and gives them additional chances for life, American military analysts say.

For example, each interceptor missile on a US ship costs 1 a million dollars (about 35 million rubles), which makes such missiles a very unprofitable means to repel enemy attacks that use an unfavorable environment for their own purposes: suicide attacks on mined boats, UAVs, cruise missiles. With the installation on board of an 30 laser, kW of electricity, the price of each “shot” is reduced to only a few dollars.

In this case, the laser beam directed at the selected target can burn the sensitive electronics of the target in a few seconds, while remaining invisible to the human eye. This technology has interested the defense ministry of several leading world states that have begun to develop it. At the same time, representatives of the American fleet are confident that they will be able to equip their ships with the laser gun first in the world.