About two round dates of world financial history 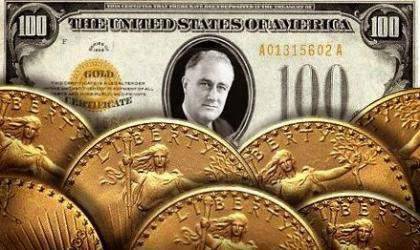 In the summer of 2014, 70 will mark the years since the international conference in Bretton Woods (New Hampshire, USA), where decisions were made that determined the architecture of the global financial system for the next three decades. The US dollar was equated to gold, and Washington guaranteed the monetary authorities of other countries free exchange of dollars for yellow metal at a fixed price of 35 dollars per troy ounce. The US dollar in 1944 finally took the monopoly position of international currency number one, beating the British pound sterling.


80 years ago: the confiscation and nationalization of gold in the United States

Another round date is the 80 anniversary of the US adoption of the Gold Reserve Act (1934), which has become the final act of “gold confiscation and nationalization”. Let us follow the steps of this process.

Step one. 6 March 1933, the US president closed down the country's banks and forbade them to make payments or export gold coins and bullion, taking advantage of the extraordinary powers that were granted to him by the law on trade with hostile states adopted during the First World War.

Step two. The legislative act of 9 March 1933 of the year “to create conditions for overcoming the state of emergency in the state’s banking system and for other purposes” the US Congress granted the authority of US President Franklin Roosevelt to prevent gold from “hoarding”.

Step three. 5 on April 1933 of the year Franklin Roosevelt issued decree No. 6102 on the actual confiscation of gold in bullion and coins from the population and organizations. All individuals and legal entities in the United States (including foreign nationals and companies storing gold in the United States), with rare exceptions, were obliged to exchange gold for paper money at 1 dollars per troy ounce before May 1933 in May 20,67. a bank in the United States that has the right to accept gold. Any contracts and securities denominated in gold were declared illegal; they were ordered to be paid in paper money in accordance with the specified exchange rate. Gold had to be handed over quickly - before 1 May 1933. From that moment on, private ownership of gold for US citizens became illegal. Any illegal possession of gold was punished by a fine of $ 10 thousand and 10 for years in prison.

Step Four. 30 January 1934 was passed the Gold Reserve Act of 1934. The minting of gold coins was discontinued; all gold was to be stored in the Treasury in the form of ingots. Ownership of the country's monetary gold reserves, including gold in the amount of $ 3,5 billion, held in federal reserve banks, was transferred to the US Treasury. In addition, the law gave the US president the authority to reassess the dollar within 50-60% of the gold content, which was established by the law of 1900 of the year (the law that established the gold standard in the US) and confirmed by the law of 1911 of the year.

What are the practical results adopted in the US in 1933-1934. measures to seize gold from citizens and organizations? First of all, the gold standard was finally dismantled in the USA. By the way, America was the only country that, even during the First World War, did not abolish or suspend this standard. After the war, the leading European countries with great difficulty restored the gold standard, but in a truncated form - like a gold bullion. In the USA, the “classic”, gold coin, standard (exchange of banknotes for gold coins) continued to operate until 1933.

Fort Knox as a symbol of gold confiscations and nationalizations

Why did you need such measures? The usual answer is to conduct the "New Deal" by Franklin Roosevelt, based on the ideas of the English economist John Keynes. Keynesianism not only allowed, but even encouraged government consumption, designed to compensate for insufficient effective demand from the private sector and the population. Keynesianism considered the standard deficit budget financing, the use of public borrowing and the growth of public debt. The existence of the gold standard made it difficult (in fact, made impossible) the implementation of economic policy based on Keynesianism.

Due to the unprecedented powers that the federal government was vested with during the Roosevelt administration, it confiscated from its citizens from 1933 to 1954 a year about 5 million ounces of gold bullion, officially valued at about 1,6 billion dollars. The treasury melted down gold coins and other items of law-abiding citizens in gold bars. The gold reserves of the US treasury increased by many billions of dollars at the expense of metal banks, which received so-called gold certificates in exchange. The government’s gold assets grew in physical terms, but in value terms they grew to an even greater degree. The change in the official price of gold has increased the nominal value of government gold reserves, which, according to the US Treasury, allowed the release of an additional 3 billion in paper currency. In addition, the dollar was devalued, the monetary system was stabilized, and wholesale prices rose by more than 33%.

Literally in one day, those citizens and bankers who knew something about the upcoming US President’s actions and who, at the beginning of 1933, brought their gold out of the United States, fabulously enriched themselves. At the same time, these measures brought damage to the owners of gold and deprived them of the metal that they stored for their future.

In order to place confiscated stocks of precious metals, the US Treasury has begun construction of the country's largest storage facility in Fort Knox. This is one of the most fortified and inaccessible to citizens (even American congressmen) buildings in America. Its construction took 16 000 cubic feet of granite, 4200 cubic yards of concrete, 750 tons of reinforcement and 670 tons of construction steel. At the marble entrance there is an engraved inscription in gold letters: “United States Vault” with the gold seal of the Treasury. The construction of the storage facility was completed in December 1936 of the year, and throughout the first half of 1937, the Treasury transported the confiscated metal there.

Bretton Woods would have been impossible without Fort Knox

America under Roosevelt vigorously increased its gold reserves. While in 1928, the United States accounted for 37,7% of the official gold reserves of capitalist countries, in 1936, this share rose to almost 50%. For comparison: in the same year 1936 France share was 13,2%, and the UK - 11,4%. By the end of World War II, the gold depositories of the leading European countries were completely empty, and the US share in the world gold reserves of the capitalist world, according to various estimates, increased to 75-80%.

And now we are back to the topic of the Bretton Woods conference, which was held 70 years ago. At this conference there was a sharp discussion between the American and English delegations, they set the tone for the entire meeting. The first was headed by US Assistant Secretary of the Treasury Harry G. White, the second by John M. Keynes. The first promoted the interests of the United States, the second - the UK. Although the famous English economist intellectually replayed his opponent, the Americans took over. The Bretton Woods system is on the 90% Harry White project. What is the reason for this outcome?

The reason is simple. America managed to convince all the conference participants (the 44 states participated) that the dollar is as good as gold. And so that no one had any doubts on this point, America promised to exchange paper dollars for a yellow metal without hindrance. Immediately after Bretton Woods, the value of the gold reserves of the United States in relation to the dollar mass (the ratio of the gold covering of cash circulation) was 75%. It was a great indicator. And all voted for the proposals of G. White. A year and a half after the conference, Bretton Woods’s decisions were ratified by the majority of the participating countries (the USSR did not ratify these decisions).

That was how the Bretton Woods system was born, which lasted until 15 in August 1971, when US President Richard Nixon announced that they were no longer exchanging dollars for gold. At that moment in the gold reserves of the US Treasury of the yellow metal there was only 16% with respect to the dollar mass, which was circulated in the USA and beyond.

In 1971, the “golden window” of the US Treasury slammed shut. Today, the world exists in terms of the paper-dollar standard, in which the Fed's printing press, which works without any restrictions, brought the world economy to a complete collapse ... And again there is talk of the need to return to some form of gold standard. The conference in Bretton Woods is nostalgic. State leaders of different countries are increasingly hinting at the need for Bretton Woods –2.

President F. Roosevelt was asked many times what caused the decision to confiscate gold from the Americans in the 1933-1934 years. Roosevelt did not give an articulate answer. It is believed that this decision was prepared behind the scenes of the official authorities. Many authors simply record these events without explaining their meaning. Some say that the gold standard interfered with the Keynesian "new course". But gold standards in 1931-1936. were canceled in Europe, however, no confiscations and nationalizations of gold were carried out there. But in America there was a nationalization. And there is a suspicion that someone already 10 years before Bretton Woods began to prepare America for this event. One way or another, without concentrating all the gold in the hands of the US Treasury, Washington would not have been able to impose on the world a postwar financial order based on the gold dollar standard.

Hence the conclusion. If we want to understand how likely the return of the modern world to the gold standard and who can be the main executor of the Bretton Woods project - 2, we need to carefully monitor where the bulk of the global reserves of the yellow metal are concentrated.

Ctrl Enter
Noticed oshЫbku Highlight text and press. Ctrl + Enter
We are
The Bretton Woods System, or How the US Seized World DominationBellver Castle - “my home is my round fortress”
Military Reviewin Yandex News
Military Reviewin Google News
10 comments
Information
Dear reader, to leave comments on the publication, you must sign in.