February 21 2014
81
The correct answer to the question “do we need an alliance with China?” Will not be given by experts, who are ever more active in favor or against this alliance. Not even Putin and Xi Jinping, saturating the “strategic partnership” formula with new volumes and forms of interaction - from Syria to Sochi, from the SCO to BRICS. Life itself will give the answer, and if less abstract, the inexorable logic of the development of geopolitical, geo-economic and other "geo" processes. 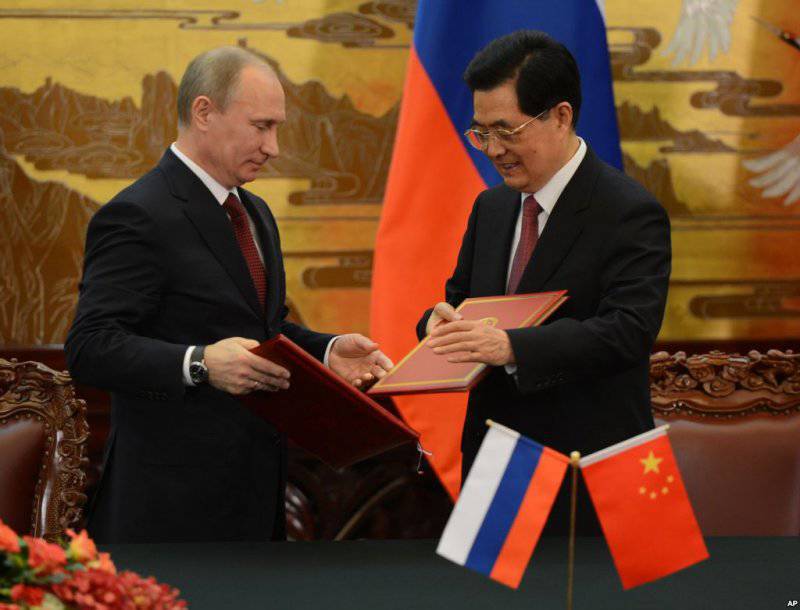 Union of Stalin and Mao

Recall: Russia has already had an alliance with China. JV Stalin and Mao Zedong signed the 14 of February on 1950 of the Moscow Treaty of Friendship, Alliance and Mutual Assistance. This document made the highest stories bilateral relations level - military-political union. This level, which was not reached to this day, was necessary for both the PRC and the USSR. It is hard to even imagine the development of events in another scenario. If China entered the system of the global environment of the Soviet Union, then, most likely, the Third World War would have become a reality. If the USSR did not guarantee the PRC a “security umbrella”, then the United States would most likely have decided to take revenge and unleash a war against China.

The new union passed the test of strength within a few months after the conclusion: 25 June, 1950, the Korean War began, and on October 19, the Chinese "people's volunteers" crossed the border with North Korea. It was they who, with the military-technical assistance of the Soviet Union, really opposed the Americans and their allies. During the three years of the war, about a million Chinese soldiers and officers were killed, even the son of Mao Zedong was killed. In turn, Moscow fulfilled its obligations to Beijing, covering the "volunteers" and the industrial base in the northeastern provinces from the air, and then transferring to China all the rights under the joint control of the CER, withdrawing its troops from the Port Arthur naval base. Soviet military property in the city of Dalian (Far). The construction and reconstruction of 50 large industrial facilities began in full swing, hundreds of Soviet specialists from various industries, agriculture, science and technology, government and media arrived in China, and thousands of Chinese students became examples of diligence and a thirst for knowledge in Soviet universities.

Now, both in Moscow and in Beijing, they are increasingly feeling pressure on their own frontiers, on their zones of vital interests. The geopolitical reorientation of Ukraine towards the European Union prepared over the years of Moscow’s inaction could become another major success of the West in reducing Russia's living space. Having absorbed the countries of the CMEA and the Warsaw Pact, as well as the Baltic republics of the USSR, the Euro-Atlantic structures at first did not threaten areas inhabited by Russians and Russian-speaking people, carriers of history and culture common with the population of Russia itself. But now Western pressure on the Ukrainian elite has led Russia to a new geopolitical catastrophe, to the prospect of the rapid spread of economic, political, cultural, and military patterns and structures of Western European civilization into the vital space of Russian civilization.

If Moscow is once again confronted with the policy of “drang nach Osten”, begun by the Teutonic knights and continued by the Polish kings, Napoleon and Hitler, then China again feels the onslaught on its maritime lines, launched by Japanese pirates and continued by the Anglo-French squadrons during the two Opium wars (1840-1842 and 1854-1860), and the Americans during the crisis in the Taiwan Strait at the end of the 50-s of the last century. Proclaimed by Obama in 2011, the “Turn to Asia” strategy is frankly aimed at surrounding China. China, which has become a “workshop of the world”, delivers 80% of the goods produced and raw materials purchased by sea. In this regard, two-thirds of the US Navy forces are being pushed into the Pacific basin, military treaties with old allies are being activated (Japan, South Korea, Australia), new military ties are being established (Vietnam, Singapore, the Philippines, Malaysia), and attempts are being made to win over non-engaged countries of the Indian Ocean basin (India, Myanmar, Sri Lanka). An attempt is being made to prevent China, the second economy of the world, into the hastily created TTP free trade zone (Trans-Pacific Trade Partnership).

The simultaneous containment of Russia and China by America and its allies pushes the two neighboring countries towards each other, strengthens their current strategic partnership, and forces them to consider the transition to a military-political alliance in one or another "innovative" form. The main obstacle on the way to the transition of strategic interaction to a qualitatively new level is the mutual distrust that persists in public opinion and among the political elites of both countries. A reflection of the phantom pains from three decades of confrontation is the publication of the Russian media about the Chinese preparing to jump to the North. tank divisions, and the Chinese - about "second-rate Russia", which is unworthy to be a partner of the Celestial Empire.

The realization of the interaction potential is also hampered by the negative experience accumulated over the past years by state and private structures of both countries. These are, for example, the participation of Chinese companies in buying up forest, fish and other resources of the Far East stolen by our corrupt officials and gangsters, copying equipment samples. These are the raider seizures of the success of Chinese companies in Russia, the demands of bribes even for the implementation of projects approved at the level of heads of state, etc. This is an increasingly active work of Chinese state and private companies in Central Asia, which is viewed in Moscow as a sphere of influence of Russia. The strategy of the “Economic Zone of the Great Silk Road”, proclaimed last year by Xi Jinping, at first provoked a mixed reaction. However, after the recent conversation between the two presidents in Sochi, the countries agreed to jointly participate in the implementation of the strategy and even connect the projects of Transsib and BAM modernization to it.

Putin marked his arrival in the Kremlin with the signing of the Treaty on Good-Neighborhood, Friendship and Cooperation between Russia and China on July 16 in Moscow on 2001. This document has worked well for a decade and provided the basis for a full-fledged strategic partnership. But in the new conditions it is advisable not only to increase the volume of interaction, but also to bring it to a new level - the level of military-political union.

A union formed in terms of international law would not only strengthen the positions of both countries in the world arena, but also end the remnants of mutual distrust that impede the transition of cooperation to a higher level. The new treaty would strengthen the legitimacy of the “Agreement on the settlement of controversial border issues” signed in 2004, forever eliminating the possibility of territorial claims. At the expense of Chinese capital, the experience of accelerated development of lagging regions and labor resources, we could achieve a real breakthrough in the arrangement of the Russian East, freeing fans of other people's good from the illusions about the possibility of "internationalization" of its natural wealth. A new qualitative leap in bilateral relations would also be a guarantee against the repetition of the sad experience of 60's, when stagnation in the post-Stalin era led first to a cooling of the entire array of bilateral ties, and then to break alliance relations.

If you don't pedal all the time, the bike will fall. This simple truth can also be applied to such complex issues as international relations. The harsh political reality does not allow us or the Chinese to relax.