Yes, this is a war in the Libyan scenario. Ukraine has its own "Benghazi": fights ahead 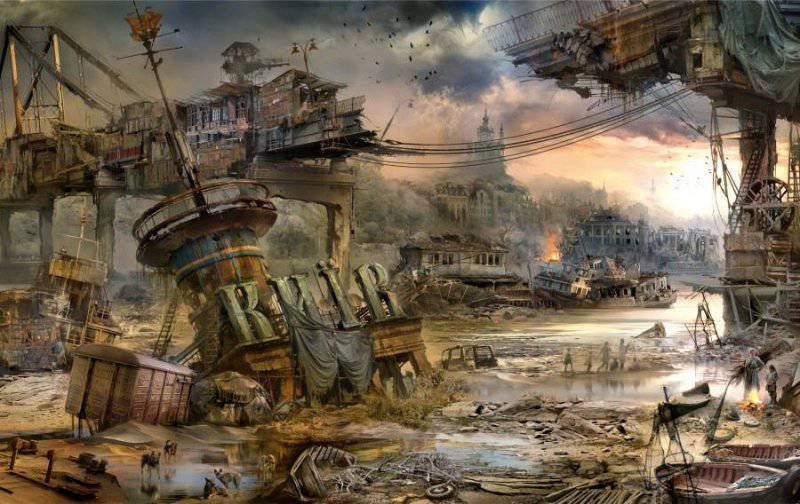 A few words about the unpleasant.

What happened in Kiev several attacks on weakened police departments in order to capture weapons - fortunately, so far without success, - and a traffic police patrol was shot in one of the districts, taking the weapon, you probably already know. That in Stanislavuva (Ivano-Frankivsk - ed.) Was taken by storm the local department of the Ministry of Internal Affairs, the cops (their own) were released with peace, but 120 AKM, very, very many cartridges and every harness socialized, is also not a secret. But the detailed details of the situation in Lviv, where the power has already completely passed into the hands of Bandera, is probably not known to everyone ...

So, Lviv turned into a full-fledged Benghazi. The buildings of the regional administration, the prosecutor's office and the regional Ministry of Internal Affairs were seized, the building of the SBU was torn down and “the group of people around 2000 people” was blocked and the base of one of the internal troops was attacked (30 soldiers were wounded, five of them were hard). At the moment, the territory of the military unit has already been captured by militants and partially burns. After negotiations with high military commanders, the soldiers were allowed to leave the base, surrendering all the ammunition to the fighters (shields, helmets, body armor, special equipment), and the weapons depot located nearby was sealed and now, under the agreement, was taken under protection by soldiers of the explosives and militants .

At the moment, there is a tendency to send replenishments to the capital of Ukraine. So, from a stopped train Lviv - Kiev was seized around 30 – 40 armed with knives and pneumatics of militants. At the entrances to Kiev, several trucks with bullet-proof vests, helmets and the like were detained, while on the Zhytomyr highway at the moment there is a battle between Western "paratroopers" and the reinforced traffic police station blocking their way, and the "paratroopers" used automatic weapons. Additional forces of the Ministry of Internal Affairs are being pulled into the conflict zone.

This is not even rebellion, but war. It is still small, but already war, and civil war, since both from one and the other side of the barricades are still citizens of one, united state. So it began in Bosnia, in Libya, in Syria, and there is no reason to hope that this cup will bypass Ukraine. Rather, there are some reasons, but I don’t see them, because Bandera needs the whole country, and two-thirds of the country do not want Bandera.

In such a situation, all kinds of negotiations about some kind of “political settlement” are no longer meaningful, since nothing depends on the three losers in Kiev. The control over the events without prior arrangement passes to the territorial Kurbashis, currently formally headed by the well-known Sashky Bilym, but there is no special doubt that the small private armies of the type known from the Volynskaya hundreds and Narnia events in Kiev will soon be crushed. , "Vikings" and many others that we just have to hear about.

It is easy to understand that in this situation any early elections lose all meaning, even because of the transparency and legality of the procedure in the five western regions is out of the question. In fact, the immediate task of the current moment, the solution of which allows Kiev to retain (to clean which is still possible) and gain a foothold in the “uninfected” areas, urgently forming support groups, is introducing an emergency for the Ukrainian authorities with the right to lose.

Otherwise, no way. To count on the suppression of insurrection by persuasion and negotiations is already meaningless, just as it is meaningless to try to suppress the insurrection on its base territory with military force. If power does not do this, it is likely that the process will proceed at the regional level. With clear consequences.

Ctrl Enter
Noticed oshЫbku Highlight text and press. Ctrl + Enter
We are
What you didn't want to know about EnglandRevealed the secret of provocation in the American Boston
Military Reviewin Yandex News
Military Reviewin Google News
132 comments
Information
Dear reader, to leave comments on the publication, you must sign in.