Quiet "killers" will go to the ocean 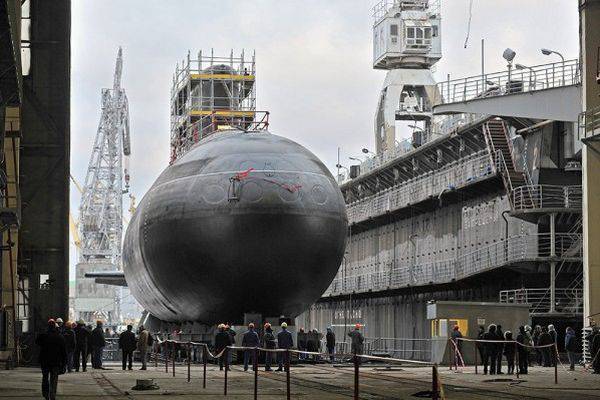 Today at the Admiralty Shipyards in St. Petersburg, a solemn ceremony will be held for laying a large diesel-electric submarine Krasnodar of the 636 project.


According to Navy Commander-in-Chief Admiral Viktor Chirkov, led by Interfax-AVN, a series of six submarines of this project under construction "will enhance the capabilities and capabilities in solving problems with the permanent operational connection of the Russian Navy in the Mediterranean Sea."

It is worth adding that Krasnodar is the fourth of the boats under construction. The construction of the entire series should be completed before 2016, and all six submarines will be part of the Black Sea fleet.

As the commander-in-chief said, these boats "will make up a full-fledged formation that will allow the Black Sea people to solve complex tasks in their operational area of ​​responsibility, together with surface forces and anti-submarine aviation". He also noted:" The Navy's main command sees the prospect of using diesel-electric submarines as an important submarine component of naval groups in the near sea zone. The actions of such submarines are provided for in those marine areas where the use of atomic submarines is impossible and impractical. One of the tasks solved by non-nuclear boats is the protection of maritime communications. They perform this function in the Northern, Pacific, Baltic and Black Sea fleets. "

The headboat of the series, named Novorossiysk, was laid in August 2010 of the year and launched on November 28 of 2013.

The 636 project is the Russian development of the very successful Soviet project 877 "Halibus". According to the NATO classification, the boats of the two projects are called “Kilo”, that is, the “Killer”.

The boats of the 877 project were also called “Warsawyanka”, as they were originally intended to equip the naval forces of the Warsaw Pact countries. The name given in NATO emphasized that the usual non-nuclear submarine was in fact a formidable warship, a real killer of the enemy’s submarine and surface forces. Even in the West, the boat was called the "black hole in the ocean", since it was almost not recorded even by very sensitive sonars of the antisubmarine forces of the North Atlantic bloc.

The boats of the 877 and 636 projects are designed in the St. Petersburg Central Design Bureau of Marine Equipment "Rubin" under the supervision of the General Designer Yu.N. Kormilitsina. Were built with 1979 year in the Far East, in Gorky and Leningrad. They are eagerly bought by many foreign countries. Currently, the submarines of the Kilo class are part of the Algerian, Vietnamese, Indian, Iranian and Chinese Navy. But in the structure of the Russian Navy there are almost no underwater diesel engines, although without them the fleet is completely incomplete and even defective. Now the situation is being corrected.

Having retained all the advantages of the 877 project, the submarines of the 636 project surpass them with the power of diesel generators, full submerged speed, and cruising range in the mode of operation of diesel engines under water. They have a much lower level of underwater noise, objectively being the lowest noise submarines in the world. Boats have better equipment and the most modern weapons, including anti-aircraft and cruise missiles.

A squadron of even six such submarines can become a formidable force and ensure the protection of our interests not only in the Black, but also in the Mediterranean. Therefore, the attention paid by the Russian Navy command to the non-nuclear submarine fleet can only be welcomed.

Armament - 6 torpedo tubes, ammunition - 18 torpedoes or mines (two per machine), anti-ship missile system such as "Club-S". Air defense of the boat is provided by the Strela-3 or Igla anti-aircraft missile systems.