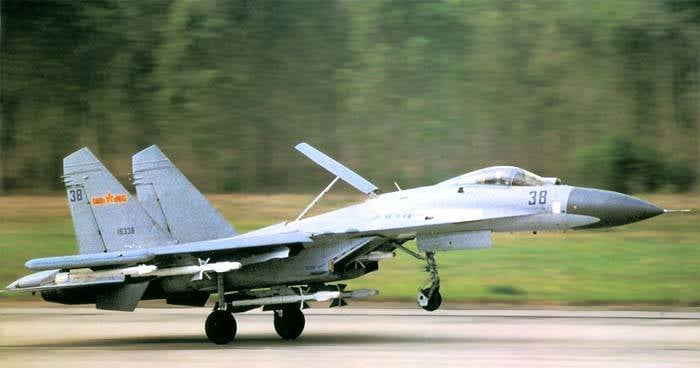 China is expanding the production of aircraft created by Sukhoi. ARMS-TASS correspondent was informed about this during the Singapore Airshow-2014 air show.


At the same time, the attention of specialists is focused on the development of Chinese own programs to create fighters, such as Jian-10 (J-10), Jian-20 (J-20) and Jian-21 / 31 ( J-21 / 31), Shenyang Aircraft Corporation SAC (Shenyang Aircraft Corporation) continues to develop the family of Su-27 aircraft that are in the Air Force of the People’s Liberation Army of China (PLA Air Force) with 1992. The most modern versions of the aircraft are carrier-based fighter Jian-15 (J-15) and multipurpose fighter Jian-16 (J-16).

China began its own development on the basis of the Su-27 family in 1992, when it became the first state to purchase a heavy fighter in addition to the post-Soviet countries. Three batches of single-seat fighters Su-27SK and two-seat Su-27UBK were delivered from Russia. These aircraft had a significant impact on changes in aviation industry of China.

Then, China received a license to manufacture Su-27SK aircraft at the plant in Shenyang. The contract was completed in 1996. The construction of 200 airplanes was originally intended. Production began with the assembly of fighters from the supplied car-sets, but then China gradually began to increase the share of its own work. Collected in Shenyang Su-27 received the designation "Jian-11" (J-11). Experts noted a low level of quality control system of the aircraft. As a result, production was completed after the assembly of the Jian-105 and Jian-11А (J-11A) fighters, which was distinguished by a number of improvements in the pilot's office and aircraft armament, placed on external pylons.

As the Shenyang Aircraft Corporation and the 601 Institute collaborating with it gained more experience building aircraft, the development of a local version of the Su-27 aircraft, Jian-11В (J-11B), began. In an effort to get rid of technological dependence on Russia, the Chinese industry developed a number of elements and systems that made it possible to assemble fighters without Russian spare parts and adapt them to the use of local aviation weapons.

The main difference of the Chinese fighter was the installed engine of local production "Shenyang-Limin" WS-10A "Taihang", which replaced the Russian TRD AL-31F produced by NPO Saturn. The test flight of the J-11WS model took place in 2002. Two years later, the first J-11B prototype, equipped with two WS-10A turbofan engines, took off. Production of the Jian-11В aircraft continued with Chinese engines, however problems associated with its reliability led to the use of the Russian AL-31F aircraft engines. At present, experts believe that most of the problems associated with the WS-10A have been overcome and the Jian-11В fighters will be equipped with these aircraft engines. Photos that appeared at the end of last year indicate that additional changes might have been made to the WS-10A design, since the shape of the nozzle was different from those presented earlier.

In addition to the new engine, the Jian-11В has a new Chinese multifunctional on-board radar (radar), an infrared search-tracking system and a communication channel that allows the use of a wide range of Chinese weapons, including the air-to-air missile PL-12 with active radar guidance. The pilot's office, which has five multifunctional displays, also uses Chinese instruments.

Jian-11В fighters entered service with the PLA Air Force at the end of 2007, and from that moment their number increased significantly. At the beginning of 2010, the PLA Navy Aviation began to receive the Jian-11В version, designed for use in the coastal zone. In addition to the single-seat fighter, the Shenyang Aircraft Corporation has developed a double version, called the Jian-11BS (J-11BS). The plane made the first flight in 2007, and was adopted by the Air Force and Navy PLA in 2010.

When solving the task of creating a deck fighter, Soviet experts chose the option of an appropriate modernization of the Su-27, which was designated the Su-33. China chose the exact same path, creating an aircraft to equip its new aircraft carrier, Liaoning. For these purposes, a prototype Su-33 was acquired from Ukraine.

The new aircraft received the designation "Jian-15" (J-15) and the name "Flying Shark". He looks and structurally resembles the Su-33, but when it was created, composite materials (CM) were widely used to reduce the mass. Most systems installed on Jian-15 are equivalent to Jian-11B. It uses a similar radar, although according to preliminary information, its action is expanded and includes several "marine" modes. The missile warning system is also similar to that of Jian-11В. The cabin is equipped with five multifunctional displays.

"Jian-15" is equipped with a wide range of weapons, which include air-to-air, ground-to-air missiles and anti-ship missiles (ASM). An unusual feature is the ability to install a container with fuel for refueling other aircraft, which allows the Jian-15 with heavy weapons to accompany other planes when performing combat missions at a considerable distance. The fuel filling rod is similar in appearance to the Russian UPAZ-1A and could be copied or purchased in Russia.

As in the case of Jian-11В, the use of a local-made aircraft engine significantly reduces the combat qualities of the aircraft. Jian-15 is supposed to use the WS-10H TRDD, which is the “maritime” version of the WS-10A. The main difference is the increased burden required to improve the take-off and landing from the deck of the Liaoning aircraft carrier. However, only one of the two prototypes of the deck fighter is equipped with engines WS-10H. At least five “Jian-15” are equipped with Russian turbofan engines AL-31F. The prototype aircraft with these engines made the first flight in August 2009. By May 2010, flights were already made from a ground platform that simulated the deck of an aircraft carrier. Tests directly on the ship began at the end of last year, when on November 23 two prototypes took off and landed. The photographs published in December 2013 clearly show that the first Jian-15, produced by the Shenyang Aircraft Corporation, are equipped with Russian aircraft engines.

At the same time, a two-seat version of the deck fighter is being developed, which may receive the designation Jian-15S (J-15S). The prototype, equipped with WS-10A engines, made its first flight in November 2012. Despite the fact that Jian-15S was originally intended to be used as a training aircraft, this fighter will be used in electronic warfare and in various combat missions.

Impressed by the use of the Su-27 family of aircraft as air defense systems, the Chinese turned their attention to the Sukhoi aircraft that could act as a carrier of heavy weapons. At the end of the 2000-s, the People's Republic of China received the first batch of two-seat multipurpose fighter Su-30MKK, which significantly increased the capabilities of the PLA Air Force to use high-precision weapons. It was ordered for the Air Force two batches of Su-30MKK on 38 aircraft in each. The aircraft ordered for the aviation of the PLA 25 Navy received an upgraded radar that allowed the use of weapon by ships.