Kiev is on fire. Fans, auditors, curators, the president and the opposition hint ...

February 21 2014
50
Very hot. And not only on the Ukrainian battlefield, but also in the European breadbasket of wrong decisions, the critical number of which made one doubt the sanity and declared cleanliness of the West. Angela, not having slept after vain night attempts to reach Yanukovych, tears and tosses. Still, for once, she took oppositional guests, cheered, fell in love behind the scenes, promised personal benefits in the future, asked not to be buzzed. And suddenly - such a setup and corpses on both sides.


Euro-landing is again flying to Ukraine. Top EeSovtsy and US Secretary of State John Kerry are working hard on targeted sanctions. “Those who are responsible for these actions should know that sanctions will be imposed against them. We made it very clear that the EU will react to any deterioration of the situation. ”- pointedly stated at the briefings. They promise to announce sanctions tomorrow, day after tomorrow, after tomorrow. At the same time, according to the representative of the European Commission, Alejandro Ulzurrun de Asanz Muñoz, “The EU-Ukraine Association Agreement remains on the table.”

So, if Yanukovych is this “bloody dictator,” the despot and the local Gaddafi, who has not yet been torn to shreds solely because of the softness of the West, suddenly comes to his senses, welcome to the table: here’s a pen. And the old guys instead of financial assistance.

Yanukovych appeals to the Ukrainians to hint at the courts and exemplary punishment for the opposition.

In response, Yatsenyuk at a meeting with messengers from the EU, the USA and Canada hints that he wants a truce and the preservation of the country.

The right-wing sector has already diagnosed this country with “civil war” and, shocking with bits, hints at the apocalypse: “If the cattle in Kiev do not stop, we will sit on Tanks, Armored personnel carriers and let's go ahead. Victory will be ours".

The EU hints that targeted sanctions are inevitable - and this is exactly pretcheto, finally, irreversibly, armor.

Russia in the official statement did not notice “A clear reaction from European politicians and structures that refuse to admit that all responsibility for the actions of radical forces lies with the opposition” and hints that “He will use all the influence so that peace and tranquility prevail in Ukraine”.

On this night, “civil activists”, who do not even go to the toilet without tweeters and facebook, for some time pretended to be lampposts. A whole few hours - and this instead of the usual fiery statuses with calls to take to the streets, taking hints weapon and the power in their hands - in the social networks was a thick white noise.

Then, closer to the morning, they came to their senses, began to fuss. They boastfully tell how girls were caught in tarpaulin jumping from the windows of a house; complain about the profession - they say, if it were not for journalism, they would go to doctors or porters; revel in pride in the people and even pray to some of their gods. Others - turn up their noses, post a photo of the first assault with a significant: “The wording“ anti-terrorist operation ”is a Russian trace.” But how then does the United States call its operations all over the world missionary?

“I can not advise anyone in this situation. Everyone makes the decision himself. I'm trying to get to Maidan as quickly as possible. Fortunately, the airport is operating normally, " - tonight, in the midst of events wrote Ruslana. In the last dispersal of the "students" she treated her throat. In the current crackdown - tusila at a meeting of the OSCE Parliamentary Assembly, where on the morning of 17 February, one day before the Kiev catastrophe, together with the “Udarovka” deputy Nalyvaychenko falsely declared violence, “crimes against humanity” on the part of the authorities and invited to admire the Ukrainian lawlessness.

By the way, at the meeting Nalyvaichenko reminded about the strength of the Ukrainian people. This people suddenly - rrraz! - and jumped out of pimply puberty. And now ready “To become the most powerful non-partisan tool, a social elevator for active young people,” seeking to “take part in real political life and change the country”. In both! Well, if so, then what about the return of the lame and scythe, at one time harshly criticized by Europe, a constitution with the retention of the current parliament until the year 2017? And for whom, are these “active young people” crowding the doors of the “social elevator”, getting quite the real life? No one predicted such a termination of the rapid flight to the top of the career ladder.

"All our energy to fight with" Berkut! ", - shout from Maidan, while Yatsenyuk-Klitschko-Tyagnybok ponder the most effective methods of blackmail in the smoking room of Bankova, commandant Parubiy - lie down in the hospital not with a stroke, not with a heart attack, or something with an “average weight” of something incomprehensible, but a failed genus of the course abstracted, floating in the atmosphere.

"Gang get out!" - Maydanovtsy are taken under a visor, dragging someone's body in a special uniform in the corners. “Yes this same“ Golden eagle! ”, - they are surprised, scared, admired, they turn the body from side to side - almost like in ancient Russian fairy tales, when some fool caught a white-eyed chud.

"Berkutovtsa caught, dragging to the Maidan!"

"The regime in Ternopil is destroyed!"

"Volyn governor caught - on his knees, chained to the battery!"

"On the Maidan they prepare thousands of Molotov cocktails"

“They took the regional prosecutor’s office - we sit and manage!” 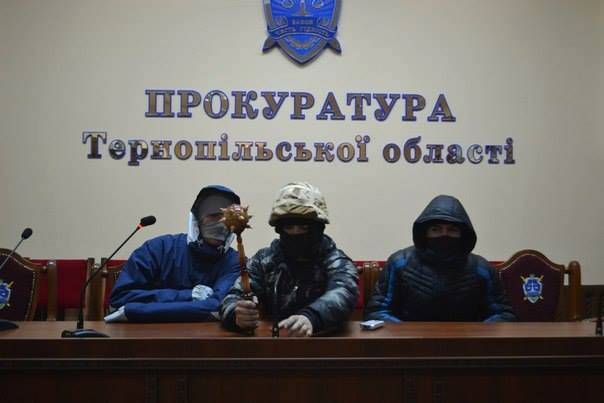 The “above-party instrument” took the main post office, the state television and radio company, the conservatory and a couple of cafes. But since you, an instrument so adult and scary, demand a full reset with simultaneous presidential and parliamentary elections. On new terms, with open lists, not blindly voting for another party package with rebranding, but with the same composition: oligarchs, ready to go mad at their own millions; former lads; dealers of corrupt bills, saboteurs, speculators, carcasses, buttons, instigators, idlers. And a handout for the public - a dozen tragicomic civil fanatics who have earned chronic laryngitis with howls from the scenes.

Mature people, have you clarified what was going on there in the Rada with the constitution, and is it so urgently necessary for all? As a few days before the massacre, in her recent interview with Tymoshenko, the opposition, of course, put to the vote the question of the return of the Constitution-2004, but only “For the sake of peace of those people who still believe that the party of power will vote for the return. But, if the voting does not get the required number of votes, “Batkishchyna” will get out of the trap of the constitutional process and will return to it only after the victory of the opposition in the next or extraordinary presidential elections. ”

So, what kind of constructive struggle is there for your future and the desire to find a consensus. Malachol Kiev resident, inspired by the right infinite, in one hand holds a cobblestone, and in the other - a paid receipt for electricity, which is completely owned by a well-known oligarch. As the night said from the scene, calling for the garbage to be demolished at the barricades: “Be a yake after May, the booty of Spryamovane on one - for one Meta!". People, it was a metaphor ...

Ctrl Enter
Noticed oshЫbku Highlight text and press. Ctrl + Enter
We are
What you didn't want to know about EnglandInterview by President Bashar Al-Assad to the Sunday Times
Military Reviewin Yandex News
Military Reviewin Google News
50 comments
Information
Dear reader, to leave comments on the publication, you must sign in.