February 20 - the day of mourning in Ukraine 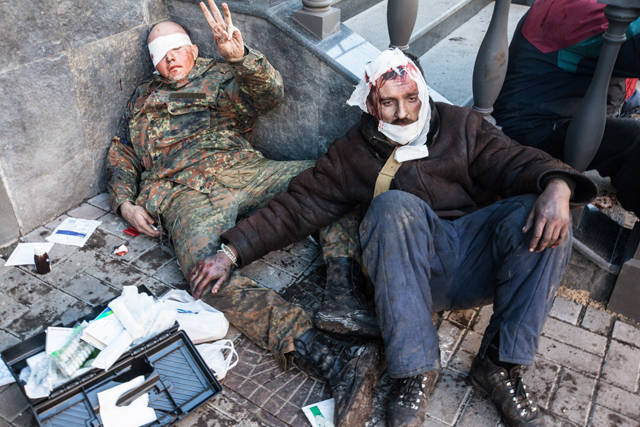 President of Ukraine Viktor Yanukovych declared 20 February a day of mourning over the loss of participants in the riots.
"In connection with the loss of life as a result of the riots, I decide to announce 20 February 2014 in Ukraine as a day of mourning," Interfax cites the decree of the head of state promulgated on Wednesday, February 19. Viktor Yanukovych expressed his condolences to those who lost loved ones: “I know that words can’t help you. I understand how terrible tragedy has befallen you. But I would like you to feel my support and my sincere regret at these moments.
Throughout Ukraine, it is prescribed to lower the national flag of the country. Concert and entertainment events, sports competitions will be canceled.
One-day mourning is declared in Lithuania. This decision was taken by the Cabinet of Ministers at a meeting on Wednesday. February 20 flags will be posted with mourning ribbons.
February 18 The Verkhovna Rada of Ukraine did not register the ruling on the return of the Constitution in the 2004 edition of the year, on which the opposition insisted. After that, street riots resumed in Kiev.
As a result of clashes between the rebels and law enforcement officers, 800 people have already been injured, 350 militiamen have been hospitalized, 83 - with gunshot wounds. From the participants of the confrontation, 263 people got to hospitals. They have a variety of injuries: gunshot wounds and burns. The death toll is 26 people, of which 10 are security forces.
Viktor Yanukovych believes that opposition leaders "crossed the border when they called on people to arms"." Criminals must be brought to justice, which will determine the punishment to them. This is not my whim, it is my duty as a guarantor of the Constitution - to ensure peace in the country, peace of citizens and justice for everyone, "- he said, referring to compatriots.
Opposition leaders Arseniy Yatsenyuk, Vitali Klitschko and Oleg Tyagnibok responded that they did not call people to arms. "We have never called for, we do not call for, and we will not call people to arms. This is our principled position. The death of every person is a personal tragedy of each of us," ITAR-TASS quoted their words.
The leader of the Batkivshchyna faction, Arseniy Yatsenyuk, described several main requirements that should be discussed at the next plenary session of the Verkhovna Rada. "This is a truce. A peaceful protest should remain on the Maidan, and the solution to the crisis must be transferred to the walls of the parliament," said the politician. Deputies from the ruling Party of Regions have not yet responded to the "program of action."
The foreign ministers of France, Germany and Poland, with the support of the EU High Representative for Foreign Affairs and Security Policy Catherine Ashton, will try to help resolve the situation. The foreign ministers will hold talks with Yanukovych and opposition leaders.
In the capital of Ukraine, the situation is tense. At the entrances to the city there are armed police units that check almost all cars. To get to the center, you need to go through several posts.
On the streets of Kiev may appear and the military. On the eve, the Security Service and the Antiterrorist Center of Ukraine decided to start an antiterrorist operation. Soldiers have the right to use weapons and special equipment, to detain and deliver to the departments of the Department of Internal Affairs of persons who have committed offenses or other actions, check documents from citizens and officials carry out personal searches of citizens and their belongings; temporarily restrict or prohibit the movement of vehicles and pedestrians.
Police have already detained 77 participants of mass protests, started about 40 criminal proceedings, of which in Kiev - 24. The leadership of many organizations located in the city center, has allowed women not to go to work. The rest get with great difficulty. In connection with the possible actions of terror, the Kiev Metro does not work, and land transport has been overloaded before. Metro will work when the decision is taken by the anti-terrorism center at the Security Service of Ukraine. The work of kindergartens and schools in the city center is suspended until February 21. Universities are still working as usual.