Dear Toby, God, I am a Moskal! 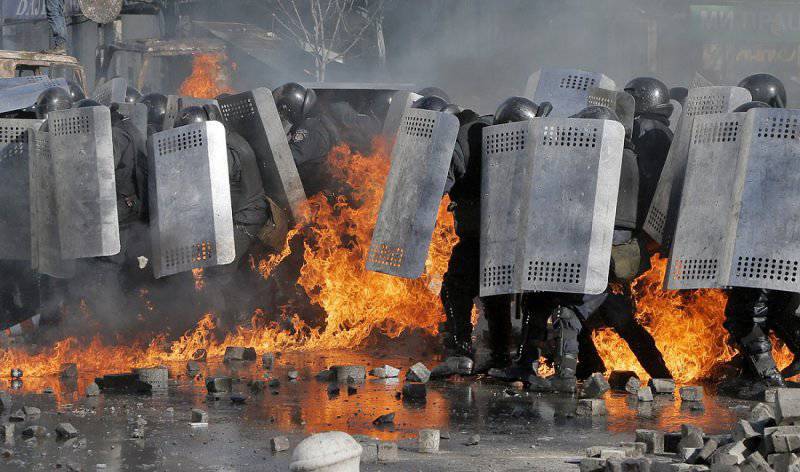 Let's be honest - all this was prepared for us.

All that is happening in Kiev now is that it “did not pass” for various reasons in Moscow.

Here, in fact, everything is simple, and you don’t even have to have an overly developed imagination: instead of Maidan, there would be Manezhnaya Square. On which on the stage equipped with large screens, instead of Ruslan and Tyagnibok, they would continuously perform some Bulk, Akunin and Akhedzhakovs. Instead of Grushevskogo - for example, Luzhnetskaya embankment. Instead of the chestnuts that were felled and burned in barrels, the “protesting” chestnuts on Khreshchatyk sawed off lime trees of the same Tver or Rozhdestvensky boulevards.

Instead of the Olympic festival in Sochi - burning tires in the center of Moscow, the seizure of administration buildings in Primorye and Kaliningrad, “cut” by protesters BAM and Transsib.

You say that this can not be?

The past does not have a subjunctive mood, and we now, from the height of our present days, understand: in our case this did not happen for exactly one simple and primitive reason - because this could not happen with us.

But this does not mean at all that the organizers of the White Ribbon and those who stand behind them did not want this. They, in principle, do not object.

Primorye, Kaliningrad, BAM and Transsib - I called, as you understand, not by chance.

These are the “official” goals agreed with the Georgian “politician” Gia Targamadze of the current “defendant” Sergey Udaltsov. Moreover, if my memory serves me, it was about supporting “crime”: exactly as it happens on modern Ukrainian Maidan, where almost every third detainee is “previously tried” by a strange coincidence. And it was precisely at Manezhnaya and other central squares that they tried to break through, just throwing stones at the police, the future “innocent prisoners” of 6 in May. And it is not by chance that all our local “Protestants”, from the anecdotal Chirikova to the recently recently claimed “civil fyurerstvo” of the “Russian nationalist” Navalny, expressed their solidarity with the “heroes of Maidan”. And even in fact, the official slogan of the “Ukrainian revolution”, “moskalyaku to Gilyaku”, can never stop them.

Kiev, a very recent "they are children," - remember more? Now these Ukrainian “children” have already learned how to kill. This is actually not as difficult as it seems, you can believe me: it’s enough to try once - it will go further.

Checked, and more than once.

Ukraine is now - frankly standing on the very brink. There, no matter what the politicians who “strive for compromise” tell us, there is already a real civil war, which is now simply balancing on the verge of a “hot phase”. Because, no matter what the "events on Maidan" end now, alas, the most interesting part is just beginning. Nowhere will the “fighting squads” form, nor - now the veterans - the “Berkut” and their supporters. And in this particular situation, I absolutely do not want to figure out who “was historically right” - neither in the times of the capital’s “white ribbon”, nor in the current hours of the beginning Kiev pogroms. All this, sorry, is secondary. And first of all - the lack of shit and blood on the streets of Russian cities and their undoubted presence for anyone else in the once cheerful and festive Ukraine.

But the joy is still not enough. Because, whatever one may say, our country and our people are there too. To which the most outspoken, mean and overt aggression is being committed.

And from the same side of the world as the entire last thousand years.

Ctrl Enter
Noticed oshЫbku Highlight text and press. Ctrl + Enter
We are
A great interview with Sergey Lavrov: about Ukraine, Obama and IranWhat you didn't want to know about England
Military Reviewin Yandex News
Military Reviewin Google News
303 comments
Information
Dear reader, to leave comments on the publication, you must sign in.