The United States in the Ukrainian crisis: a shift in the balance of power towards extremism

February 20 2014
114
The latest facts relating to the actions of the United States in Ukraine confirm previous assessments regarding the use of more stringent methods by Washington to put pressure on the Ukrainian authorities on all points of crisis settlement: the release of all those detained for participating in riots, the complete reformatting of the Ukrainian government itself, including the formation of a fully opposition government , a return to the 2004 constitution of the year and, it is possible, early presidential elections. 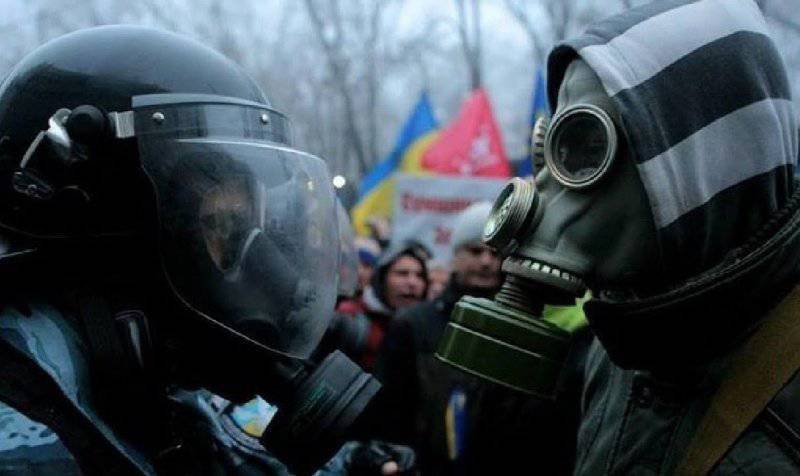 Only through organized speeches of the most radical protesters - neo-Nazi organizations, subordinated to an extensive network of militants, can achieve rapid progress on all these points and force the government to make unilateral concessions.

The use of militants and paramilitary groups to combat the power, their introduction into the general system of the balance of power in Ukraine creates the threat of constant street riots, political destabilization and, in the long term, permanent armed conflict.

The political legalization of neo-Nazi organizations, their withdrawal from the shadows as a side of negotiations between the government and the parliamentary opposition, while maintaining their militarized underground, is apparently now the main task of Washington.

The US position on the current Ukrainian crisis was fully revealed in the intercepted negotiations of Western diplomats, in particular V.Nuland with the US Ambassador to Kiev D.Payett, as well as the Secretary General of the European External Action Service Helga Schmidt with the EU representative in Ukraine Jan Tombinsky. Most exhaustively, it is described in the analytical material of Stratfor "New Aspects of American Foreign Policy Towards Russia".

From the document it follows that from the very beginning of the crisis, Washington chose the "balance of power" tactics. The Americans, "by providing financial and psychological support to demonstrators who protested against Yanukovych’s decision to abandon a closer relationship with Europe," and later, "speaking out against government attempts to crush the demonstrations," kept the opportunity for regime change in Ukraine with minimal participation and risk for the US .

Now official Washington believes that the EU does not act decisively in support of opponents of the Ukrainian authorities. The State Department believes that Ukraine should "act quickly and without Europeans and put together a very specific opposition coalition." "The United States is not sure that Europe has the will and interest in obstructing the actions of Russians. Therefore, a purely passive model will not work here."

Therefore, "the next step was the lowest degree of participation in the containment of the Russians ...". This means the US withdrawal from simple EU assistance in resolving the political crisis and moving to independent active intervention in Ukraine’s affairs. The US withdrawal from the shadow of Brussels in the Ukrainian conflict became fully evident at the Munich Security Conference.

The document mentioned above unequivocally states: "The United States is dissatisfied with Germany and the European Union. Logically, this should mean that the United States intends to actively support the opponents of the regime more actively than the Germans."

In terms of the current political situation in Ukraine, this means purposeful attempts to completely reformat the government, including the early presidential elections in Ukraine.

The document says it is streamlined, but analysis of the text excludes other interpretations: “Yanukovych ... acted within his authority, refusing an agreement with the EU. If demonstrators can mix the elected president because of their disagreement with his actions, they will create a precedent undermining the constitutional image Even if Yanukovych suppressed protests too severely, this does not annul his election to the presidency, but from the point of view of the balance of power strategy this is quite reasonable. Prozapadnaya (albeit ambiguous) Uk Ain will create a huge strategic problem for Russia. "

In addition, another conversation has been made public on the Internet - people with voices resembling the voices of the Secretary General of the European External Action Service Helga Schmidt and the EU representative in Ukraine Jan Tombinsky. In a conversation allegedly, Schmidt is secretly discussing with Tombinsky the issue of EU sanctions against Ukrainian officials. She complains of pressure from the US side due to the fact that the position of the European Union in the Ukrainian crisis is too soft. “The fact that you really need to know and that we are very angry is that the Americans are walking in circles and telling that the EU is too soft a stance,” she turns to Tombinsky. In turn, the EU representative in Ukraine emphasizes that the European Union does not take part in competitions with the United States - who has a stronger position, and notes that the EU has "other ways of influencing."

The position of the EU, which is now forming and representing Germany, is aimed at a more balanced participation in resolving the crisis in Ukraine. It is possible that it has undergone a significant correction under the influence of intensive interaction with the Russian Federation. This happened last week, because back in early February, German Foreign Minister Steinmeier talked about the need to put pressure on the Ukrainian authorities on the threat of sanctions.

A significant constructive moment of the current position of Germany, for which the Americans strongly criticize it, is the recognition of the crucial role of the Russian side in resolving the conflict between the government and the opposition. Significantly, the EU is restraining the opposition from making excessive and unrealistic demands for power, thereby isolating the "madmen" from the Maidan, who for the most part are ready to go to the end in a coup d'etat. This is from the point of view of Washington and is a manifestation of the "indecision" of Brussels in countering the Russians.

The manifestation of decisiveness from the point of view of Washington is precisely the introduction into the general system of the balance of domestic political forces in Ukraine of ultranationalist and frankly neo-Nazi groups that have (importantly) paramilitary formations. Their slogans and the line in relations with the authorities fully fit into the tactical line of the United States to stimulate the pressure of the protesters on power. Only they can move the current settlement process more "decisively", but the radicals, in order to make demands on their behalf to the authorities and participate in a political settlement, should be legalized.

The task of bringing neo-Nazi fighters from a marginal state into the field of public policy is currently being solved, apparently, with the direct participation of Washington.

This process began in early February, when Yarosh said that he did not rule out the Right Sector’s nomination in the presidential election. Later, the leader of the "Right Sector" in the Kiev region confirmed the urgency of the task of entering the public policy: "The problem is that now neither Triub, nor we (UNA-UNSO, included in the Right Sector) have any deputies. And for to understand the political component of what is happening in the regions, it will take some time to acclimatize. "

The sharp increase in public activity of the radicals and the expression of their intentions so far confirm their involvement in American plans in Ukraine.

Thus, in addition to the relatively sane parliamentary opposition (UDAR and “Batkivshchyna”) and legal, slightly undermined Nazis from “Freedom,” a third force is invited to participate in the political process - the openly neo-Nazi “Right Sector”.

According to the Stratfor document, Syria, in which militants (only Islamic) put pressure on legitimate power and wage a monstrous cruel war against the people, is a typical successful strategy of the balance of power, in which the equilibrium point is biased towards extremism. The authors of this analyst calmly put it as a model on a par with Ukraine.

A few days ago, the former American ambassador to Ukraine, Stephen Peifer, "not interfering" in internal countries, said that the amnesty against the "Maidan activists", the release of the building of the KSCA, st. Hrushevsky should reduce tension in Kiev, but found it necessary to emphasize: "If the genuine political process does not start, the tension on the streets of Kiev and in other cities of Ukraine is likely to increase again."

It can be concluded that the resolution of the Ukrainian crisis is not at all the goal of US intervention in the internal affairs of Ukraine. Washington’s goal in Ukraine is merely the continuation of a geopolitical confrontation with the Russian Federation. Washington deliberately makes the entire population of the country, civil peace and harmony in Ukrainian society hostage its groundless aggressive geopolitical ambitions in Ukraine.

Therefore, a tough and irreconcilable reaction of Ukrainian society to the facts of US intervention in the internal Ukrainian crisis and to attempts by extremist groups to legalize is necessary. The inclusion of militant neo-Nazi groups in the legal political field in addition to the “Freedom” will significantly shift the balance of power in Ukrainian politics to the right, aggravate the crisis of Ukrainian statehood and may lead to a real armed civil war. Residents and authorities of the south-eastern region of Ukraine never capitulate to neo-Nazism, which has no right to exist in principle, especially on the territory of Ukraine, which is already clearly stated in this region. Most of the residents of the central as well as the western regions of the country did not say their word about neo-Nazis.