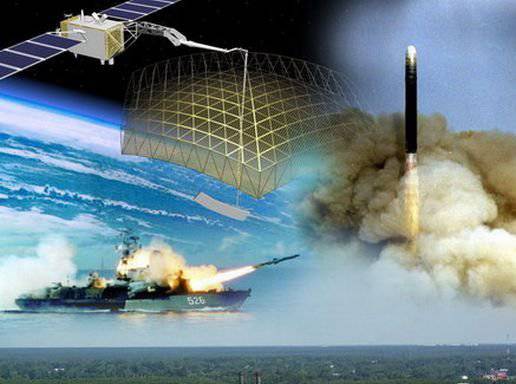 In recent centuries, military science was the main driver of scientific and technological progress, and the military-industrial complex was a concentration of high technology, which then spread to the civilian sphere. With the collapse of the USSR, the role of the military, as customers, naturally decreased for a certain period of time. And accordingly, the pace of technological progress slowed down. During this period, we were not dealing with new solutions, but with so-called improving innovations. This factor played a significant role in a sharp decrease in the dynamics of the development of the military-industrial complex in the USA, Great Britain, and most other countries of the world. In these external conditions favorable to our military-industrial complex, due to internal resources, we managed to prevent lag in key areas of conventional weapons. Our planes, Tanksmissile systems are still, as evidenced, a highly competitive global arms market remain in the lead.

However, the situation has radically changed in recent years. First, specific types of wars and methods of warfare are changing more and more. The so-called hybrid, mixed wars, wars of variable intensity, etc. appeared. Furthermore, held last year, the largest conference of military theorists, practitioners and lawyers in the National Military University, one of the US Army's leading educational institutions failed to reach a common point of view on the very understanding of the law of war in the modern world. Roughly speaking, it is not clear where the world ends and the war begins. How to distinguish acts of terrorism from armed aggression, etc.

Secondly, on the one hand, new types of military operations have generated, but on the other hand, they themselves are caused by fundamentally new types of weapons. Virtually in all countries of the world, cyberspace has become regarded as a full-fledged fifth theater of military operations. Fully automated and robotic combat systems are increasingly being used. At this stage, these are drones. In a number of countries around the world, tests are being conducted and, moreover, fundamentally new types of acoustic and optical weapons. With the advent of ultrafast warhead delivery vehicles, the very understanding of the doctrine of deterrence is changing significantly. This list will be easily extended by military specialists to full pages.

Thirdly, and this is the main thing for today's topic, new types of weapons for types of war unknown yesterday are produced on a fundamentally different technological base that did not exist yesterday. We have widely discussed such topics as Kondratieff waves, technological structures, technological zones, etc. To some extent, these discussions are scientific and practical. In the world before our eyes, the last 2-3 of the year is unfolding the Third Industrial Revolution. She has no theoretical justification. Not high-quality scientific works, but rather journalistic or political science works are devoted to her. But from this it does not cease to be real. Moreover, in a sense, TPD was quite unexpected for many experts from foreign thought factories, who thought in familiar terms. They were waiting for the flourishing of nanotechnology, cognitive technology, biotechnology, information technology. Those. it was more likely not about the production revolution, but about highlighting one or another sector of the economy based on one or other scientific directions.

In practice, it goes differently. The core of the TPD are transformations in the production process itself, methods for its organization, management, and associated logistics. The main, if it can be said, pillars of the TPR are robotization, the widespread introduction of 3D printers and the inclusion of information technologies in the very foundations of the production process.

First about the problems. Already today, the process of re-industrialization of America, the return to the country, especially in the military-industrial sector, full of production chains, is under way. Moreover, this return is not based on technology and even the beginning of the zero years of this century, but using the latest advances in robotics and 3D printing. Thousands of robotized lines go by now, and the largest corporations are beginning to use 3D printing, not in the design workshops and design offices, but as key elements of production technology. According to various kinds of publications, a significant part of fundamentally new types of weapons is produced in new enterprises equipped with robotic lines, 3D printing, and rich software packages.

With all the geopolitical, civilizational and other disagreements and contradictions in the realities of today's world, our country closely cooperates, for example, in the development of the Arctic shelf, creating infrastructure in the Far East and other projects with leading corporations with headquarters in London, New York, Paris and Beijing It is clear that these corporations to a large extent introduce the most advanced technologies, which Russia currently does not have.

It would seem that in the global world this principle could be extended to any sphere. Moreover, we all have in our memory the purchase of weapons from Western companies, the signing of various kinds of agreements with foreign companies specializing in military equipment, etc. However, it seems that in the conditions of a new stage of the growing conflict situation in the world situation, hopes for this kind of cooperation are not quite reasonable. At least, in that part where it is a question of really most advanced technologies and the equipment necessary for production of the most perfect products.

The West, and above all the United States, is well aware that the Achilles' heel of the Russian military-industrial complex is the weakness of its technological base. This weakness is caused by the complete degradation of domestic engineering and equipment manufacturing. This industry has been completely defeated. Moreover, if you read the books of American experts at the beginning of 90's, they recognized that the Soviet Union was not inferior, and in some areas surpassed the US in the field of robotics, the production of automated and rotary lines. Today, these plants are no longer physically existing. In the factory buildings located warehouses, shops, entertainment centers and restaurants.

Under these conditions, it is necessary to carefully consider the repeated reports of the specialized press in recent months about some of the unusual characteristics possessed by robotized lines and industrial 3D printers. From these sources, it was found out that the Americans themselves discovered that it is not uncommon for the most modern robotic systems and industrial 3D printers to have mandatory geolocation programs. At the same time, if the equipment is transported to another place that was not agreed in the contract, it simply automatically turns off and does not work. It is not difficult to understand that in fact it is about the revival of the famous COCOM. But not in the form of legal regulations, but on the basis of software solutions that guarantee the absence of equipment in the territory of certain countries, or even specific industries.

Under current conditions, it is hardly to be expected that the West would be willing to engage in technological cooperation just as much in the military-industrial sphere, as it happens in the field of mining, the energy sector, etc. Rather, we can expect systemic measures to curb the development of the Russian military-industrial complex on the basis of a ban on the supply of appropriate equipment that is implemented not through legal procedures, but through inevitable software solutions. If during the times of the USSR, the GRU, as is known, was quite successfully engaged in industrial intelligence, then the implementation of such solutions makes this possibility very difficult.

In fact, it is about the need to achieve technological self-sufficiency of the Russian military industrial complex. Make it extremely difficult, but in our opinion, it is possible. And this is connected not so much with any jerks or mobilizations, as with systemic daily painstaking work, taking into account the prevailing realities.

First of all, it is necessary to conduct the strictest inventory of Russian developments in the field of high-tech engineering, production of means of production for the military-industrial complex. Despite the panic that prevails in some experts, the situation is far from hopeless. The main thing in this area is people. As the analysis shows, a significant part of our specialists successfully work in leading companies and universities in Western Europe, South Korea, the USA and Israel in the field of robotics, 3D printing and the production of new materials. As we all understand, there can always be arguments that will make for these people, at least a considerable part of them, an attractive job in their homeland, incl. in the military-industrial complex.

Oddly enough, the RAS reform, around which so many copies are broken, creates certain additional possibilities for solving this task. If we discard immediate propaganda clichés, it will become clear that academic institutions are not signs, not buildings, and not even academicians heading a particular institute, but teams and their equipment. At one time, the famous Minsredmash of the USSR, Slavsky and the Defense Dozen, had, in fact, a powerful own science. Even academic institutions worked on many topics, as a kind of co-performers. In this connection, it may deserve attention in the course of the reform of Russian science to single out a special sector of inter-institutional scientific and technical teams that would be directly subordinate to the Deputy Prime Minister for the military-industrial complex. Accordingly, these teams, equipped with the necessary additional equipment, could work on solving the top-priority practical tasks of ensuring technological self-sufficiency. According to foreign experts, such groups of specialists in Russia exist. Moreover, in a variety of centers, including areas of the Urals, Siberia, the Far East. It is important not to allow teams in full force or their leaders to go abroad to work. Moreover, for example, the Chinese comrades, as well as the largest corporations in South Korea, are making great efforts in this direction.

Finally, I would like to say this. According to leading experts in a number of areas, Russia today alone will not be able to overcome the lag in the production of ultra-modern production lines and equipment and, accordingly, to achieve technological self-sufficiency. Most likely, at least in the frame section, this is true. And here no calls for jerks and mobilization will help. Does this mean that, given the ban on leading companies to export advanced technologies to Russia, our military-industrial complex is doomed to technological dependence?

Of course not. It should be borne in mind that most of the technologies used for the production of new types of weapons are dual-use technologies that are widely used in the civilian sector. By the way, this is evidenced by the fact that a few days ago the famous American DARPA laid out in open access many of the developments. The nature of the TPR is such that it focuses not on huge factories, but on mini-enterprises, which, if necessary, are combined into certain production networks. Equipment for such enterprises and generally new types of robotics and 3 printing in the West, and especially in America and Asia, are mainly produced by young companies, so-called startups. Such companies hundreds and thousands open annually. Slightly fewer closes. Moreover, often the worst, and sometimes the best ones in technology are closed. They close because they did not find any additional funding on time, and more often they could not enter the sales markets. Here lies the solution. No one bothers the special division of the Russian military industrial complex to thoroughly monitor all startups in areas of interest and waiting for the moment when companies with the technological solutions needed by Russia are ready to go to the bottom for economic reasons just to buy them. No one can prohibit the owner to install equipment where he wants and for what he wants.

In general, there are not complex, depleted, not demanding over-voltage of the economy, largely autonomous from the national problems of solving the technological self-sufficiency of the Russian military-industrial complex.