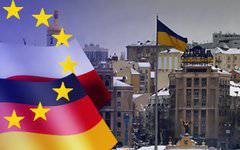 Concentration on the economic and intellectual spheres allows the Germans to consolidate in Ukraine, avoiding confrontation with Moscow


“Mutual understanding on the Ukrainian issue can be an essential prerequisite for the German-Polish partnership in Europe” and serve “closer rapprochement between Berlin and Warsaw,” reads the document “Über Vilnius hinaus denken published on the eve of the emergence of Euromaidan in Kiev: Polen und Deutschland müssen die EU “Ostpolitik vorantreiben”, prepared on the initiative of the German side by Polish and German diplomats and politicians, including deputies of the Bundestag, ministers, including former foreign ministers of Poland Andrzej Olechowski and Adam Rotfeld.

Recently, behind the feverish activity on the Ukrainian direction of the representatives of Washington, the attempts of the Europeans to achieve greater mutual understanding within the EU at the expense of Ukraine were not so noticeable. Meanwhile, the Germans and Poles continue to work actively with Ukraine, using the tactics of carrots and sticks against official Kiev to create an atmosphere of permanent conflict in this country.

“The European Union is still ready to sign an agreement with Ukraine,” said President of the European Union Herman Van Rompuy after meeting with Polish Prime Minister Donald Tusk in Warsaw. “The EU plays on the side of the opposition and makes Yanukovych illegal, although it has not violated any laws,” says German expert, scientific director of the German-Russian Forum, Alexander Rahr. Interestingly, all the dirty work of seduction and blackmail of Ukrainian politicians, the German side manages to shift to the Poles, and they try their best.

In the form of carrot Poland, through the mouth of President B. Komorowski, it proposes to support “strengthening Ukrainian pro-European aspirations” with EU money from the budget of the Eastern Partnership. The EU, represented by the head of the Foreign Affairs Committee of the European Parliament, Elmar Brock, offers “maydanschikam” “economic assistance and support in carrying out reforms”, without taking any specific obligations, and at the same time calls on citizens of Ukraine through Deutsche Welle to complain to the European Parliament on the “policy of Moscow”, consisting precisely in the provision of specific economic assistance.

In the form of a whip, Vice President of the European Parliament, Jacek Protasiewicz, threatens to end the official relations of the European Union with Ukraine. American Poles like Zbigniew Brzezinski openly threaten Russia with a catastrophe if they support Ukraine. Polish politicians and public figures threaten Ukraine with a civil war (statement by A.Smolyar - leader of the oldest Polish NGO, the Stefan Batory Foundation), provocatively express "fears of the division of Ukraine" (statement by Prime Minister D.Tusk) and assure through "Polish Radio" that "Poland will further guarantee Ukraine the support of the right choice."

Unlike the Poles and Americans, operating through structures such as the Polish-American-Ukrainian Cooperation Foundation (PAUCI) or the Center for Free Elections and Democracy, the Germans in their work with Ukraine focus on economic and humanitarian aspects, as well as on working with political elite and intellectuals (the key goal is not so much to draw Ukraine into Euro-Atlantic structures as to provide for brain drain and prospective personnel to Germany).

In this vein, the funds of K. Adenauer, F. Nawman, G. Seidel, F. Ebert, R. Bosch, the Society named after Fraunhofer (FhG), German Academic Exchange Service (DAAD), German Research Community (DFG), Helmholtz Society, Dortmund International Education Center (IBB), etc. The financial capabilities of these structures are impressive. For example, not the most famous of them. Fraunhofer has a budget of 1,4 billion euros, DAAD - more than 250 million euros per year and so on.

What to say about the famous Konrad Adenauer Foundation, which implements hundreds of “humanitarian projects” in more than 120 countries!

Representatives of these structures, which operated in parallel with the American specialists in the coup d'états of the German coordinator Maidan Andreas Umland, declared persona non grata in Ukraine, believe that Ukraine "needs a change of political generation." Therefore, says the assistant in Central and Eastern Europe Norbert Beckman-Dirkes, “we work with young people in priority. After all, it is for them to determine the future of their country. ” “We do not want to support fragmentation of political parties. Our goal is to create a broad platform for finding common positions, ”says the head of the Ukrainian branch of the Foundation. K.Adenauer German citizen Niko Lange.

German non-profit organizations formed a large network of allies in Ukraine itself, including structures such as the Institute of Political Education, the Institute of Euro-Atlantic Cooperation, the Academy of Ukrainian Press, the V. Pinchuk Foundation, the Ukrainian Center for Economic and Political Research. Razumkov and so on.

In addition to the scientific elite, political parties and public structures, the networks of German NGOs do not overlook the Ukrainian media, partnership projects with the Ukrainian authorities, seminars with the participation of high-ranking representatives of law enforcement agencies of Ukraine and middle-level officers, as well as electoral processes. The activity of these networks is not limited to the territory of Ukraine alone, but also extends to Belarus and Russia.

Concentration mainly in the economic and intellectual spheres allows the Germans to consolidate in Ukraine, avoiding confrontation with Moscow and any obligations to the Ukrainians (the Germans successfully shift the role to the Poles). Germany remains the second after Russia trading partner of Ukraine, gradually gaining more and more weight not only in Europe, but also in the post-Soviet space.

The overseas strategists from the US State Department do not like this so much that Undersecretary of State Victoria Nuland and US Ambassador in Kiev Jeffrey Payette assess the role of the European Union in the Ukrainian crisis, resorting to foul language. In Washington, they want the Germans to drag chestnuts out of the fire of the Maidan pogrom, proceeding from the interests not of Germany, but of the “world community” with which American politicians identify the United States.

Therefore, while in Brussels they think that Nuland’s curses “reflect the general mood among Americans tired of EU diplomacy,” the editorials of the German press eloquently show how much American ambitions coincide with German ones: “Fuck the EU” for Angela Merkel is “absolutely unacceptable” ( Die Welt); “Merkel is upset by insulting Fuck the EU” (Frankfurter Rundschau); “Saying“ Fuck the EU ”. Merkel: “Absolutely Unacceptable” (Frankfurter Allgemeine Zeitung).