February 21 2014
0
Seeing the recent successes of the leading countries in the field of self-propelled anti-aircraft installations (ZSU), the Republic of South Africa in the eighties began developing its own project of such a system. It was assumed that the new combat vehicle of its own design will be able to carry out air defense of troops on the march and in positions. In addition, according to some data, the new ZSU could be offered to third countries. 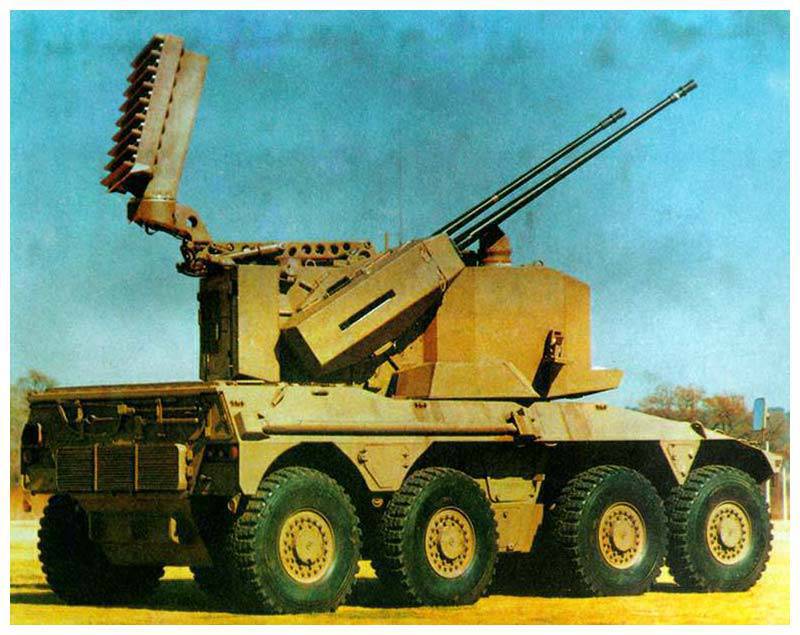 The ARMSCOR company, which started the development of a new project, was going to create a universal tower with radio-electronic equipment and weapons suitable for installation on various chassis. This feature of the anti-aircraft system, apparently, was offered both to expand the circle of possible foreign buyers, and to more simply equip its own troops with the necessary number of anti-aircraft self-propelled guns on existing chassis. These requirements determined the appearance of the anti-aircraft system, designated ZA-35. It is noteworthy that the finished anti-aircraft tower looks a lot like other foreign systems of this class, for example, the German Gepard or the British Marksman.

All units of the new anti-aircraft system were mounted on a relatively large tower, suitable for installation on different chassis. Looking ahead, it should be said that the prototype ZA-35 ZSU was built on the basis of the eight-wheeled armored vehicle Rooikat. In this embodiment, a promising anti-aircraft self-propelled gun passed tests. It is known that an alternative base for the ZA-35 could be a Soviet-made T-72 tank and a South African SAX G6 chassis. The shoulder strap of the anti-aircraft tower allowed it to be installed on several types of chassis. In the light of the composition of the South African technology park in the eighties, the possibility of installing a turret on the T-72 tank looks like an attempt to interest foreign buyers.

The ZA-35 turret was welded from armor plates of various thicknesses. The front sheets protected from shells of caliber up to 23 mm, and the sides and sterns provided protection against any small weapons on any distances. The tower was equipped with electromechanical turning mechanisms, which allowed it to be deployed by 180 ° to 4 seconds. In front of the tower, a block with optoelectronic equipment was placed, which allowed the complex operator to independently monitor the airspace and direct the guns at the target. At the rear of the sides of the turret were rotating units with automatic guns. The rear part of the roof of the tower was taken under the antenna radar detection. An interesting feature of this antenna was its installation system. In the stowed position, the antenna "hung" behind the tower, and in the combat position it rose to a vertical position. If necessary, the operator of the complex could increase the target detection range by raising the antenna on the hydraulically driven mast to a height of about 5 meters. It was possible to lift the antenna only while parking. 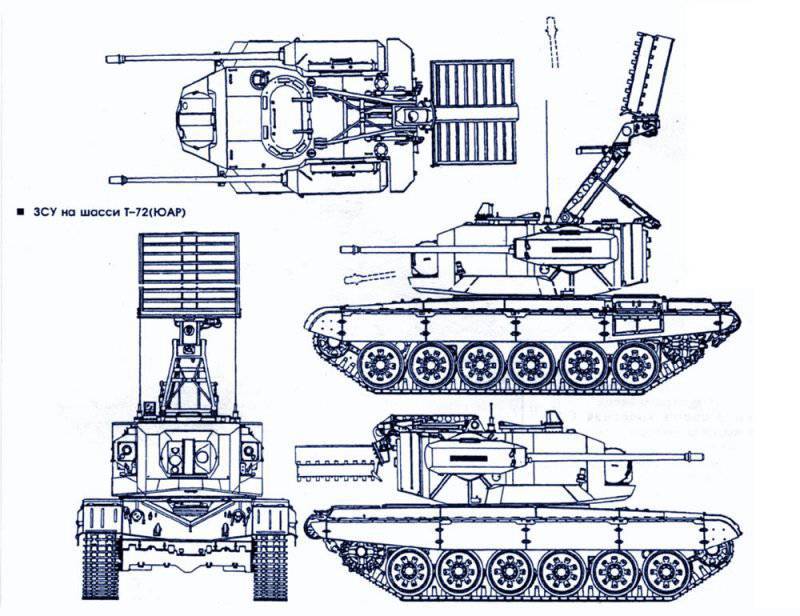 The EDR110 system was used as a radar target detection and control weapon. The capabilities of this radar, according to some data, made it possible to track air targets to 100 and direct guns to one of them. When the antenna was raised, the detection range of the aircraft reached 12 km, helicopters - 8 km and ground targets - 4 km. The ZA-35 sighting complex ZS-XNUMX also included a set of optical-electronic equipment with a laser rangefinder and a data transmission system. If necessary, anti-aircraft self-propelled gun could use external targeting.

The ZA-35 self-propelled self-propelled gun was equipped with two M-35 automatic cannons of 35 mm caliber. The guns were placed on the sides of the turret in armored casings. The installation system of the guns allowed them to be guided in a vertical plane ranging from -8 ° to + 81 ° from the horizontal. At the rate of firing 550 rounds per minute, the M-35 cannon would fire projectiles at initial speeds up to 1180 m / s. Inside the tower there were two 230 projectiles stores each. After the ammunition was used up, the crew could replace both stores within 8 minutes and proceed to protect the airspace again. 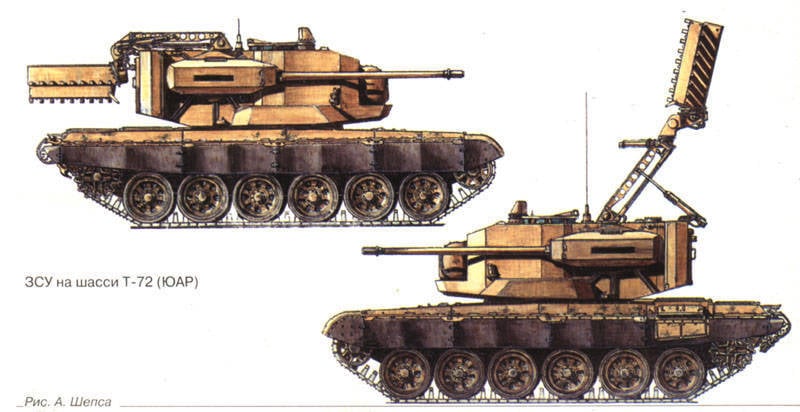 The ZA-35 ZSU ammunition consisted of two types of 35 caliber shells: high-explosive fragmentation and armor-piercing. The latter could punch 100-mm armor plate at a distance of 1000 meters. It was believed that such a nomenclature of ammunition would be sufficient to destroy various aircraft and ground targets.

The first copy of the promising ZSU ZA-35 was built on the basis of the Rooikat armored vehicle with the wheel formula 8х8. The chassis, equipped with a hp 563 diesel engine, provided the 34-ton car with a fairly high performance. Thus, the maximum speed when driving on a highway exceeded 100 km / h, and the cruising range reached 700 kilometers. In general, the car turned out successful and suitable for use in the army. 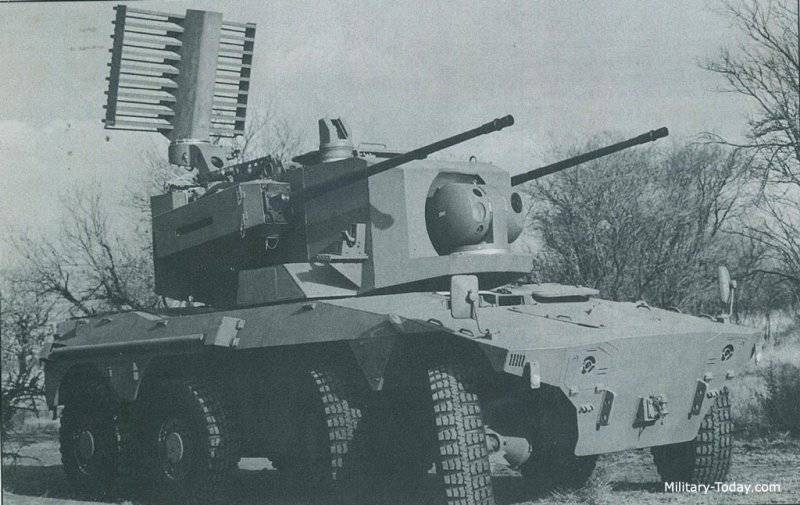 The last mention of the ZA-35 project dates back to the first half of the nineties. At this time, the Republic of South Africa was going through extremely difficult times, which affected the life of the country as a whole and the defense industry in particular. According to some reports, about two dozen new anti-aircraft self-propelled guns were built by this time, but other sources indicate the existence of only one prototype. Accurate information on the existence of ZA-35 ZSU prototypes on the chassis tank The T-72 is also missing - there are only general schemes for such a machine.

The project ZA-35 was closed approximately in the mid-nineties, and since then South Africa has not tried to create its own anti-aircraft self-propelled guns. Currently, small-caliber artillery in the armed forces of the Republic of South Africa is represented only by towed systems of several types of foreign production. 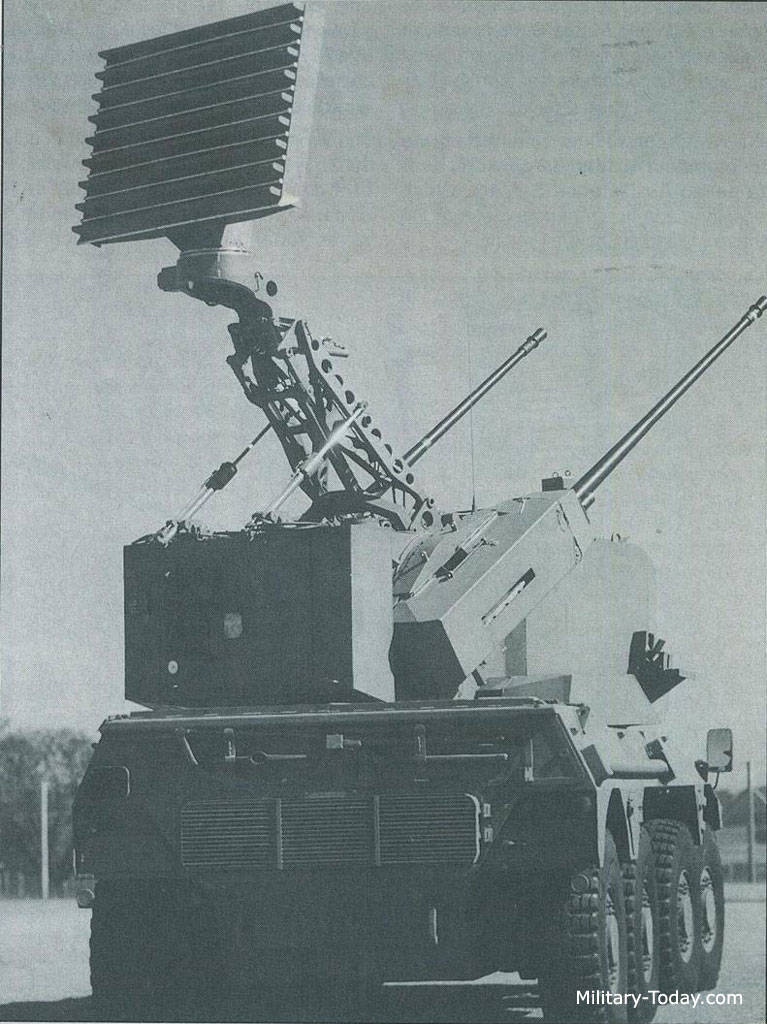