The range of machines manufactured by Paramount Group

The South African company Paramount Group over the past few years, firmly entrenched in the competitive market of wheeled armored combat vehicles (BBM).

This success is based not only on export deliveries, but also on the development of machines at their own expense in order to obtain rather a line of ready-to-sell products that have good adaptability, rather than those designed for a specific customer.

The company's vehicles are currently in service with Azerbaijan and several other countries, including Congo and Gabon. The company also declares strategic agreements with a number of other countries and further expansion of the sales market, but does not disclose exactly where these customers are located. 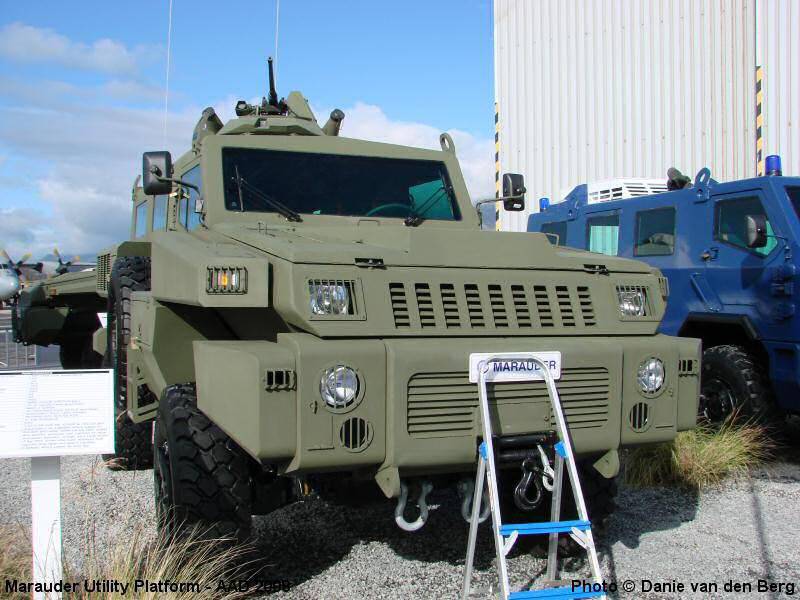 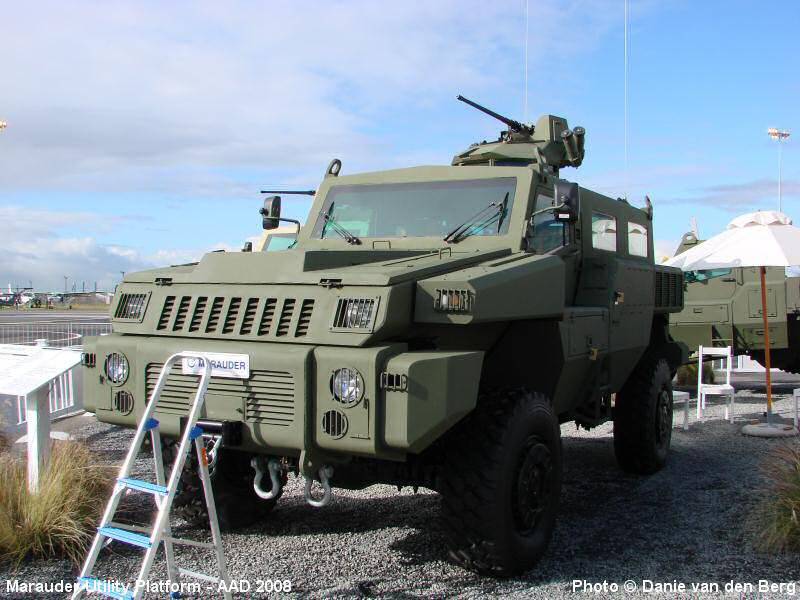 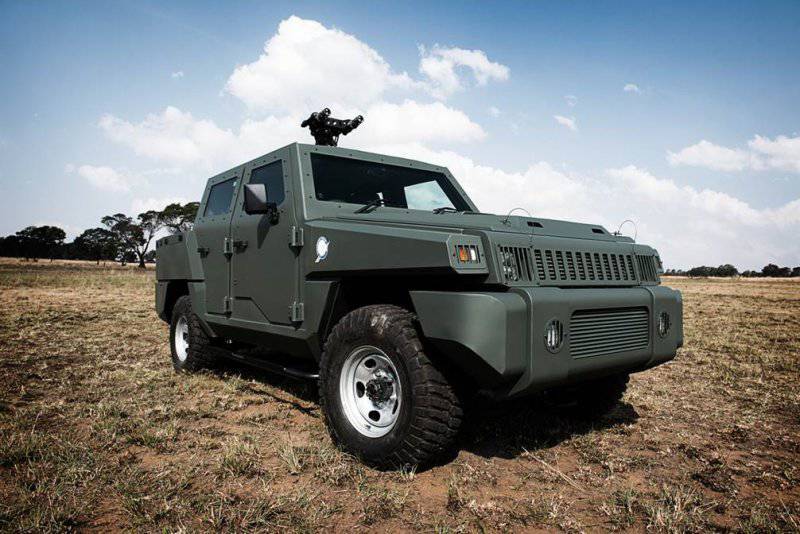 The newest machine in this growing family is the Marauder Patrol patrol version, first shown in September 2012. Designed and manufactured at Paramount's Midrand Land Systems plant, the project is intended for the “lower” segment of the secure machine market. The first Marauder Patrol cars are based on the Toyota Land Cruiser chassis, but can also be made on the Nissan Patrol platform.

At the moment, made two cars (photo above), one in the four-door configuration of the pickup, the second belongs to the class of "SUVs" (the English term SUV - Sport Utility Vehicle) with a protected crew compartment extended to the entire stern. Both cars are mainly designed for internal security tasks, but their compact dimensions extend the capabilities of their combat use in urban environments.

The pickup version has a total tonnage of 3,5 tonnes (including 550 kg loading capacity) with the crew’s central capsule with basic STANAG 4569 protection 1 level. The load compartment does not have protection, unlike the engine compartment, which has some initial level of protection.
The SUV version has a total mass of 4,8 tons, but can carry up to 9 people, four people more than the patrol version.

Standard production cars will have a 128 kW (172 hp) turbo diesel engine with a four-wheel drive plus five-speed manual transmission. This is enough to develop a maximum speed of 120 km / h and have a cruising range of up to 800 km. The air conditioning system is installed as standard.

Customers can also determine the number of transmission gears, the level of protection, and options for roof mounted weapons. According to Paramount, the reservation kit, for example, can be upgraded to STANAG 4569 2 level without degrading the machine.

Paramount has not yet received orders for the Patrol variant, but its representative said that after signing the contract, the company could deliver these cars in four to six months.

The new patrol version expands the company's product line and joins the earlier Matador and Marauder MPV (Mine Protected Vehicle - mino protected vehicle) options. Along with the assembly on the territory of South Africa, these machines are also being assembled in Azerbaijan in accordance with the contract issued by the Ministry of Defense of this country in 2009.

In accordance with the agreement, the initial batch of Matador 30 machines, Matador machines and Matara 15 machines and Marauder machines was produced under license at a factory in Baku. The local defense ministry was responsible for the final assembly, and Paramount supplied the main subsystems, such as the hull, power unit, suspension and wheel drive.

In the middle of 2011, the Ministry of Defense issued the second order for 60 machines, once again equally divided into these two options, their deliveries are expected at the end of 2013. The proportion of locally produced components in machines is increasing with each batch. 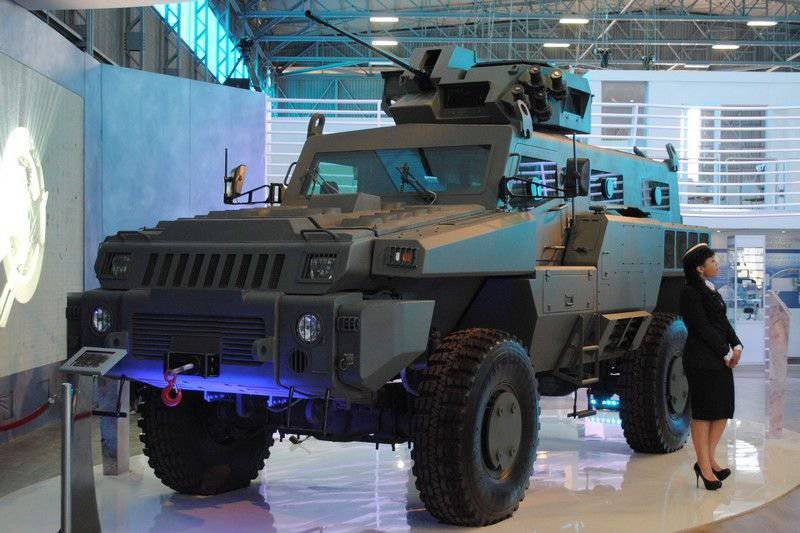 In September 2012, the South African company Comenius also showed off a prototype of its single tower Valour 20 on a Marauder machine.

Meanwhile, Paramount confirmed that it had begun manufacturing its thirty largest machines — well-protected Mbombe 6x6 — for the first customer. Negotiations are underway with at least two potential buyers who can purchase a total of 150 machines. However, as usual, the company refused to name these customers. 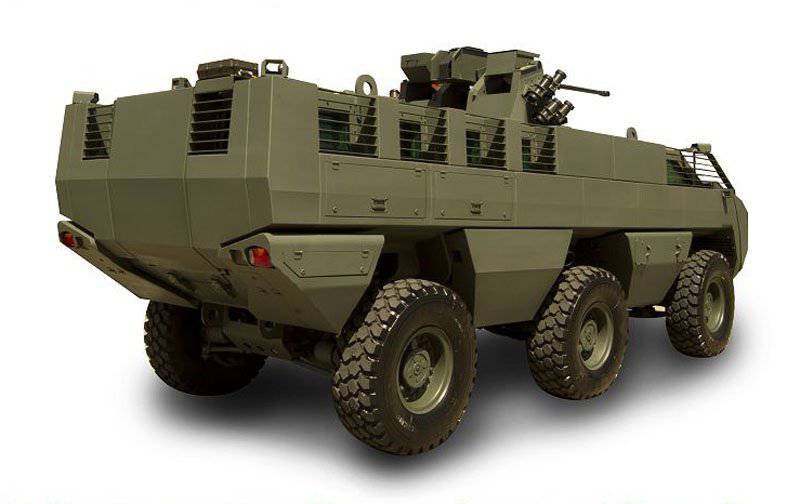 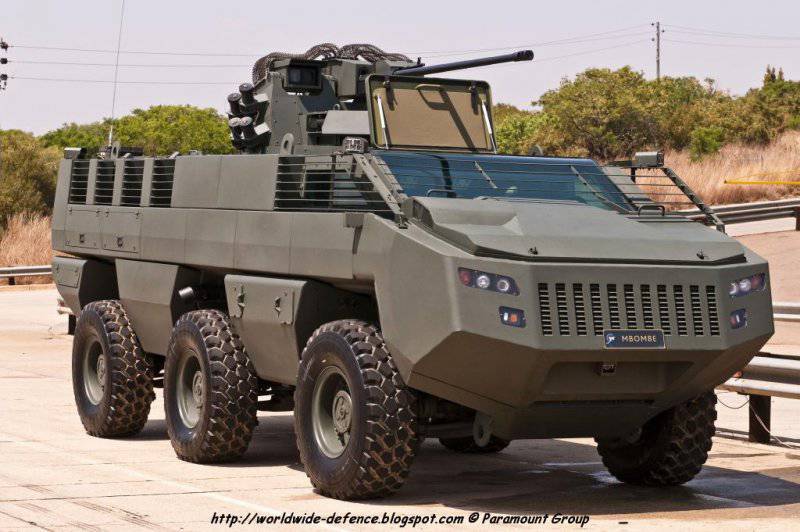 The first Mbombe machine in the BMP version was shown in 2010 with a single-seater single-seater turret armed with the widely-used Russian 30-mm 2A42 cannon and a paired 7,62-mm machine gun (photo above).

In this configuration, Mbombe, as a rule, has a crew commander, a gunner and driver plus space for eight paratroopers sitting facing each other on the explosion-proof seats in the rear part.

At the initial screening, the Mbombe had the declared total weight of 27 tons, the base weight was 16 tons and 11 tons were allocated for weapon systems, reservations, crew and equipment. However, in the process of refinement (including an increase in the height of the machine), the total mass was 24 tons with the same base weight of 16 tons. 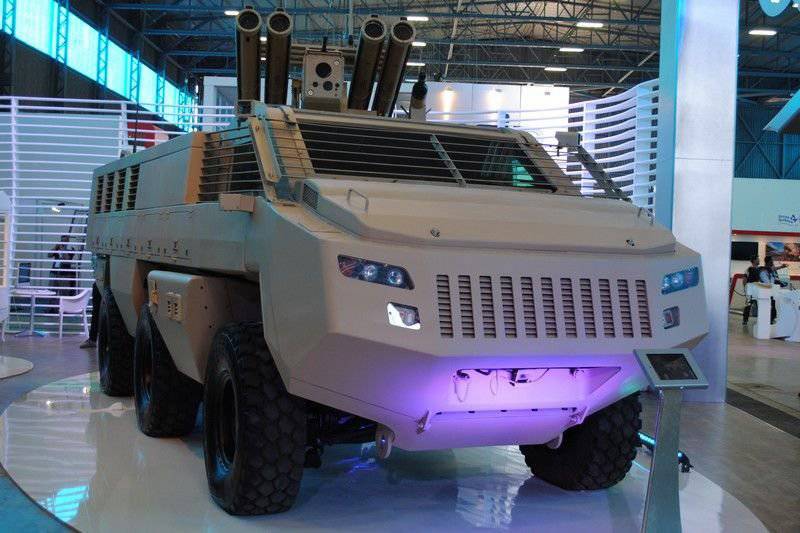 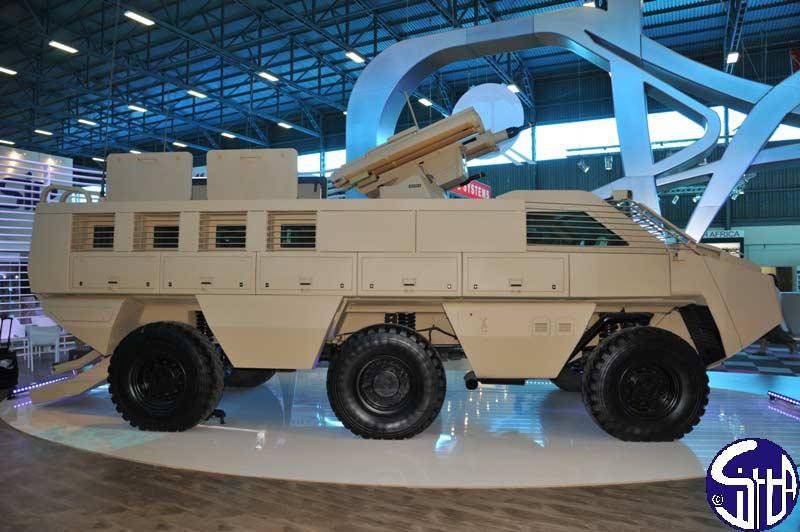 A variant of the Mbombe machine Vesuvius

The 12,7-mm machine gun with ready-made 100 ammunition ammunition is installed between two launchers directly above the day / night optical-electronic surveillance system of the entire weapon set. The latter also includes an automatic tracking station. The turret can rotate all 360 degrees with elevation angles from -10 to + 35 degrees.

The Ingwe missile tested in real combat conditions is equipped with a nose-leading fuse that activates the dynamic protection unit on the tank, and thus allows the HEAT main cumulative warhead to penetrate the main armor. According to Denel Dynamics, the HEAT combat unit of the Ingwe missile can penetrate up to 1000 mm of conventional steel armor. 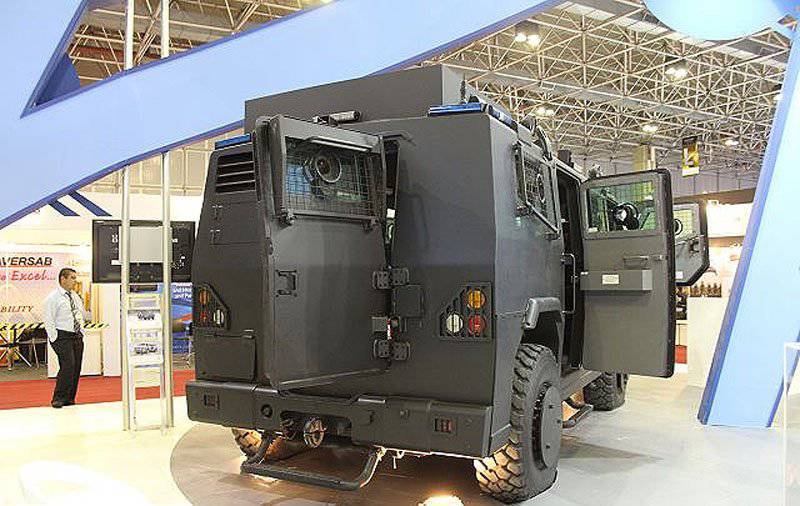 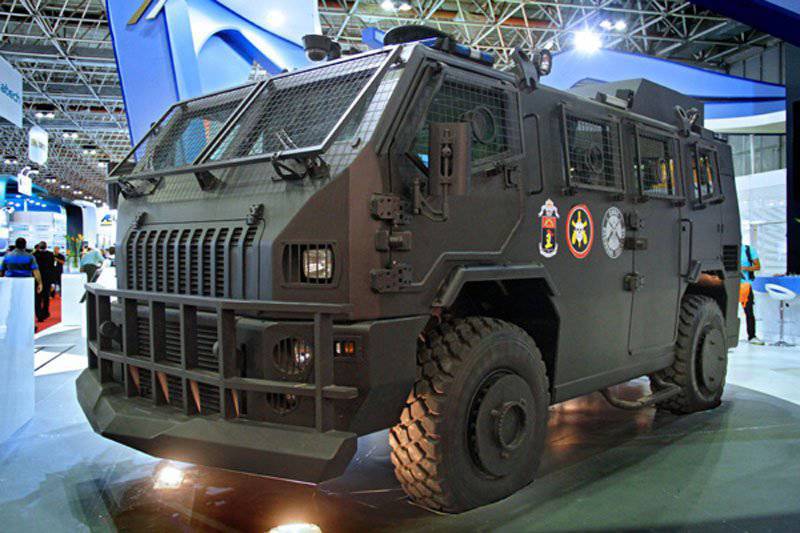 
The latest member of the company's current product line is the Maverick ISV (Internal Security Vehicle) machine. It was first shown in 2008 year and is currently in service with its first customer, Gabon, who received 10 machines at the start of 2012 for work during the African Cup of Nations tournament. Another customer (again unknown) also ordered this car.

Like the Matador, Marauder MPV and Mbombe machines, the Maverick ISV has a double monocoque, welded steel housing providing protection to the STANAG 4569 3 level.

Standard equipment includes an air-conditioning system and an auxiliary power unit, a set of fire resistant wheels and a central wheel inflation system, as well as fire detection and extinguishing systems. In addition, a dozer blade and front fenders can be installed to clear obstacles, and the public address system is quite common for an ISV-performing machine.

While the basic version of the Maverick typically has a crew of two people (commander and driver) and accommodates ten paratroopers, this machine can be modified for other tasks, such as a command post with advanced communications, video surveillance systems and flat panel displays.

The new Mbombe 6x6 version is equipped with a turret armed with four ATGMs with laser-guided Denel Dynamics Ingwe and an 12,7-mm machine gun 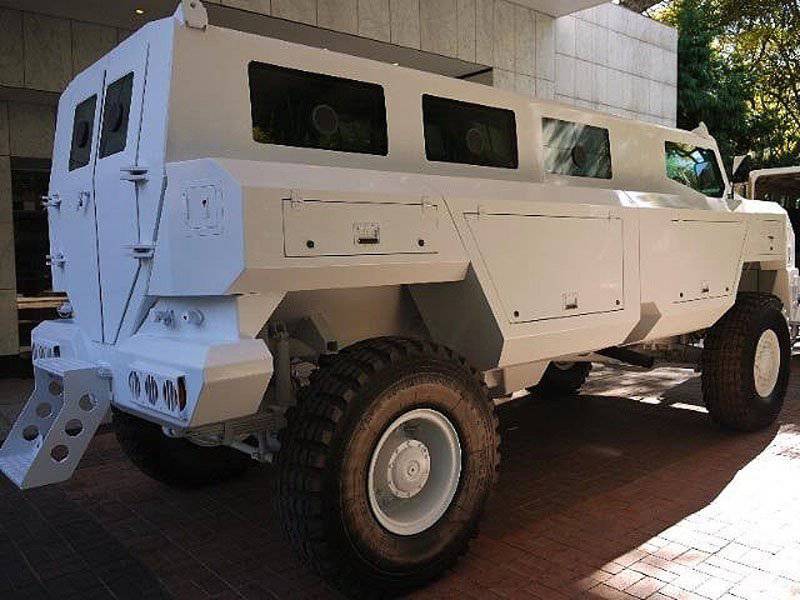 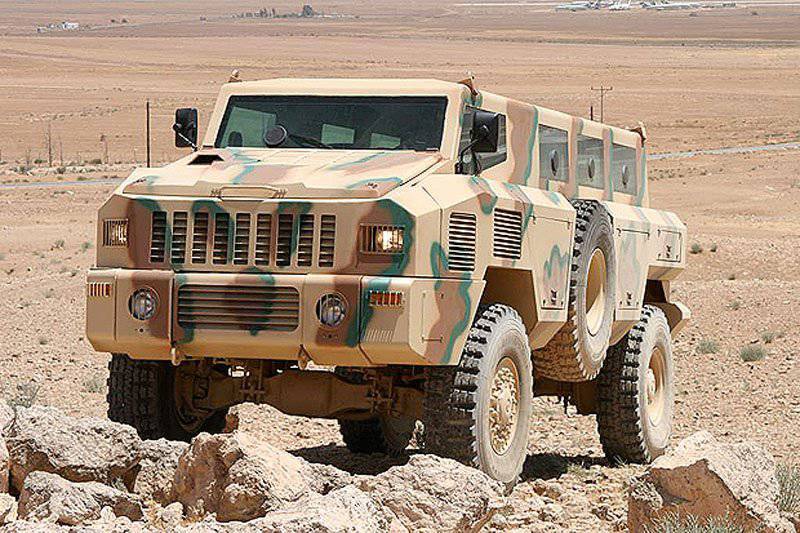