Polish officials against the Soviet general

February 20 2014
75
18 February 1945 of the Year - 69 Years Ago - not far from Melzak (East Prussia), General Ivan Chernyakhovsky, who was with several escorts in an army vehicle, was fatally wounded by a German artillery shell. After about 30 years, a monument was erected at the site of the death of the commander of the 3 Byelorussian Front. The settlement by that time had already become part of the Polish People's Republic and was called Pieniężno (pronounced “Penzhno”).


After Poland proclaimed the transition to “democratic” values, a monument to a Soviet general, if someone tried to maintain in good condition, it was exclusively local residents. But the local authorities, on the balance of which the monument was located, decided that the “democratic” values ​​and duty to the liberator general by definition cannot be coordinated with each other, and therefore the monument turned into something dull and forgotten. The overgrown bushes, the abundance of weeds, crumbling cladding and in addition Russophobic inscriptions that regularly appeared on the monument to Chernyakhovsky “thanks” to activists of new-fangled nationalist (or, admittedly, Nazi) organizations made the monument hostage to new policies of the Polish leadership.

Frankly speaking, for a number of years such an attitude to the monuments of the heroes of the Great Patriotic War was observed not only in this god-forgotten Polish Penenzhno. In the spaces of the former USSR, there were enough of their own places, where vandals from power and strangers stuck in Nazi ideas systematically destroyed monuments to soldiers-liberators or participated in outright outrages (pouring paint on monuments, beating off individual elements from them, drawing Hitler's swastika - other than desecrating memory of people who shed their blood for liberation from the fascist scorching heat not only of cities, but also of whole nations, these actions can not be called). Somewhere monuments dilapidated due to the banal lack of funding, and somewhere they tried to get rid of them purposefully - ideology, you see, did not allow to have a monument to Soviet heroes in the neighborhood. 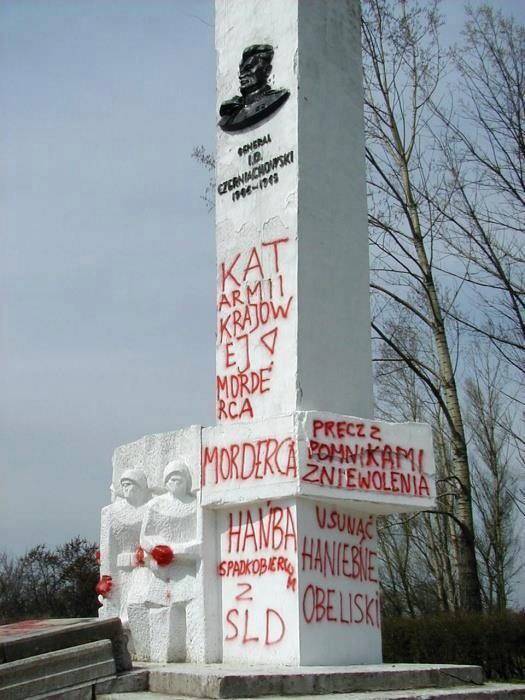 The authorities of Penenzhno, located not far from the border with the Kaliningrad region, decided that the issue of the monument to Chernyakhovsky should be finally resolved. “To finally decide” is to take and demolish ... Apparently, in this very Penenzhno with a population of about 3 thousands of inhabitants, the authorities simply have no other, let's say, materials for work — the town, you know, equipped from and to: all able-bodied residents are provided with jobs with decent wages, medicine and education - exclusively at the highest level, for young people - lots of options for realizing creative potential, etc. and so on ... Well, just wherever you look - everywhere everything smells sweet, exuding the most subtle flavor of well-being and an unsurpassed level of democracy ... And then, you know, this very monument ... Is that right? ..

It turned out that they decided to demolish the monument, because a) there is not enough money for its maintenance in the local treasury, b) Chernyakhovsky’s identity at the local government raises questions. That is, Chernyakhovsky and other Soviet commanders, who cleared what is now called independent Poland from Nazism, did not have any questions about “freeing or not freeing”, but the head Penenzhno now, you see, has questions to Chernyakhovsky ... Sorry, but who is this “Head” so that he could “have questions” at all to the legendary personality, who in fact gave the right to the petty bureaucracy to sit today in his municipal chair and talk about stories? .. Maybe it is de Gaulle or Churchill? .. But only the figure is definitely not of this scale ...

In order to dismantle the monument, it was necessary to get a simple majority of votes in the local parliamentary meeting. After the vote, this “simple majority” was received (who would doubt) - 7 local lawmakers from 13-ti voted for the demolition of the monument to General Chernyakhovsky. Before proceeding to further coverage of the situation, I personally would like to express my gratitude to those deputies who said “no!” To the initiative in question. Apparently, in Poland there are still people who are not inclined to believe that all current state and public problems are somehow connected with the presence on the Polish territory of monuments to Soviet soldiers ...

So, the majority of votes in Penenzhno decided to demolish the monument to Chernyakhovsky. Remarkably, the demolition was scheduled to be completed precisely by February 18 - the day of the death of the Soviet commander. The company, which was supposed to carry out the dismantling, was found quickly. And in addition, it turned out that the company was not even going to take money from the local authorities to complete the procedure of demolishing the monument - you see, what disintegrated ones ... That is, the authorities did not have the funds to restore and maintain the monument in proper condition (well, let's say) why then no company has declared a desire to assist the restoration of gratuitous? Why there were no requests to the Russian side (and we, by the way, even have a whole agreement with Poland about solving such problems)? Or "to break - not to build" ...

Once the decision of the authorities to dismantle the monument to General Chernyakhovsky was found out in Russia, the Polish town turned into a place in which, since World War II, no such number of Russians had been seen. Russian delegations began to arrive here calling on the Polish side to refuse to dismantle the monument. One of such delegations was headed by the Russian ambassador to Poland, Alexander Nikolaevich Alekseev. Several delegations arrived in the Warmia-Mazury region from the Kaliningrad region with a proposal to either help with the restoration of the monument or transport it to the territory of the Russian Federation. Representatives of different delegations agreed that the decision to demolish the monument in Poland is an unfriendly act towards Russia, as well as an event that has not far gone from typical vandalism.

As soon as the representatives of Russia came out with proposals regarding the fate of the monument to the Soviet general, some “especially aware” Polish publications entered the action. Next went the so-called “American portal of the Poles” http://www.poland.us/ (speaking title, isn't it?), who published the material by Stanislav Debitsky. So this “American Pole” Debitski writes the following (regarding the proposal to transport the monument from Poland to Russia):

And well, let the Russians take to the monument, glorifying the man who was the ruthless executioner of Polish soldiers!

Yes, we, Russians, will take it - let Debitsky and all the “American Poles” have no doubt. At one time, we took out a monument to General Chernyakhovsky from Vilnius and installed it in Voronezh, and from Penenzhno, if necessary, we will take it out - it will not be for money exactly. But let the Mazuryan authorities and Mr. Debicky not forget that the story is a complicated thing and can often go according to such a scenario, when the Poles (usual, not “American” in the first place) may again need the help of a large eastern neighbor ... As they say, one must renounce ... And then let the pans remember who the “executioner” is, and who is the liberator, who sacrificed himself for the freedom of others, and who has nothing to do except chewing his own snot and the war with memory. 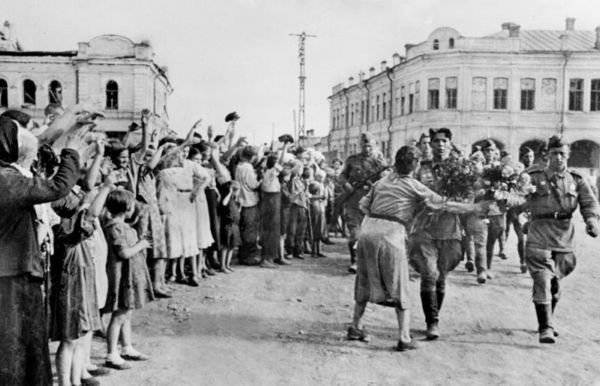 Ctrl Enter
Noticed oshЫbku Highlight text and press. Ctrl + Enter
We are
Action "Military Review": Write a letter in PenenzhnoSituational analysis of the death of the MH17 flight (Malaysian Boeing 777), made on the basis of engineering analysis from 15.08.2014
Military Reviewin Yandex News
Military Reviewin Google News
75 comments
Information
Dear reader, to leave comments on the publication, you must sign in.