The sky over the Mediterranean "gave" the fifth centurion of Russia 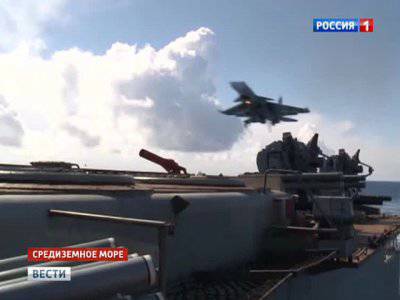 In the ranks of sea pilots of the North fleet a new centurion appeared. This is the name of the man who made one hundred landings on the deck of an aircraft carrier. There are only five such aces in Russia. Moreover, the last hundred landings were exchanged in quite combat conditions - our pilots are engaged in air patrols off the coast of Syria.


Salyutny day on the aircraft carrier "Admiral Kuznetsov" begins in the hangar long before sunrise. A special elevator raises a multi-ton, not yet filled Su-33 to the height of a five-story building in just a minute.

In the parking lot of the aircraft parks powerful, albeit below human growth, the tractor.

"Here the wind is constant, rolls, the trim plays. It can be difficult when there is a strong wave. Upstairs is much lighter than below. There the walls are limited by bulkheads, and here is space," tells about the working conditions of the technician of the regulation and repair group of the heavy aircraft carrier "Admiral Kuznetsov "Evgeny Lebedev.

Before the pilots taking off in the first, as they say on an aircraft carrier, the pilots were assigned not a training task, but a combat task: to carry out air cover of a group of Russian Navy ships that are directly off the coast of Syrian civil war. And ensure the safety of transportation of humanitarian goods in this country.

To capture this rare - if not unique to the Mediterranean Sea - operation of the Russian military, journalists are sent in advance to a given area on a search and rescue helicopter. They succeed, but the shaking leaves its mark on the video. One of the passages of the two Russian Su-33 above the large landing ships "Azov" and "George the Victorious" and the large anti-submarine "Admiral Levchenko" are selected.

Completing the training flight, the pilot first passes over the deck at a height of several meters, goes to the U-turn, touches the strip in the second lap with the rear landing gear, and lands only on the third lap.

This is the jubilee hundredth landing on the deck of aircraft carrier Lieutenant Colonel Igor Tsukur. Exclusively with the help of fellow pilots, the threefold contact with the gun, which is traditional for such cases, is being carried out: a serious line has been passed for any ship pilot.

"Thanks to the brothers-helicopter pilots who always come to our aid. My beloved crew thanks a lot and respect until the end of my days. It's like a river, you will not enter the same water," - thanks the head of the combat training service of a regiment of heavy fighter ships aircraft carrier "Admiral Kuznetsov" Igor Tsukur.

When landings go one after another, an emergency command comes from the control room - urgently replace the cracked spring that supports the receiving cable. A special team copes with the task in minutes. Failure on the landing schedule is not reflected.

Silhouettes of foreign warships, meanwhile, began to appear on the horizon more often.

“The USS Revenge destroyer operates on the starboard side, the Gaziantep Turkey Navy frigate operates next to us. The aircraft from the French nuclear aircraft carrier Charles de Gaulle carried out maneuvers in the immediate vicinity,” explains Admiral, commander of the Russian Navy aircraft carrier group in the Mediterranean Sea, Sergei Zhug

In between flights - this is one of the immutable security measures on the aircraft carrier - the deck is inspected for the presence of foreign objects. And again, one by one, the ship Su-33 rise into the Mediterranean sky.