In the United States experience a unique tracked carrier

February 19 2014
11
Specialists from the US space agency NASA began running tests of a unique tracked vehicle - the Crawler-transporter 2 (CT-2), designed to carry the huge launch vehicle Space Launch System (SLS) with the newest Orion spacecraft on board. Recently, this tracked transporter has passed the first stage of testing at the Kennedy Space Center in Florida. NASA engineers tested the reliability of new roller bearings for traction motors. It is reported that the new bearings, as well as other systems CT-2, worked in normal mode and warmed up within acceptable limits.

To date, NASA's tracked transporters, or, as they are also called, crawlers, are the largest tracked vehicles in the world. So far, the new tracked carrier has passed only the first phase of its tests. It should be ready for the first mission to launch a new NASA space launch system - the SLS rocket and the Orion spacecraft, which is scheduled for 2017 year. At the moment, new roller bearings have been tested on sections A and C. After the tests, the CT-2 was returned to the assembly shop at the Kennedy Space Center, where they plan to install the same roller bearings in section B and D.

A new tracked transporter was created as a result of a modification of the old CT-1 transporter, which for 45 years of operation transported a huge number of the heaviest cargoes, including the Saturn-5 rocket intended for the Apollo, as well as numerous space shuttles. After the Space Shuttle space program was shut down in 2011, the tracked transporter was not sent for scrap, but it was decided to upgrade it in order to use it to transport the promising American SLS rocket. This heavy rocket will be able to put into low Earth orbit up to 130 tons of payload. 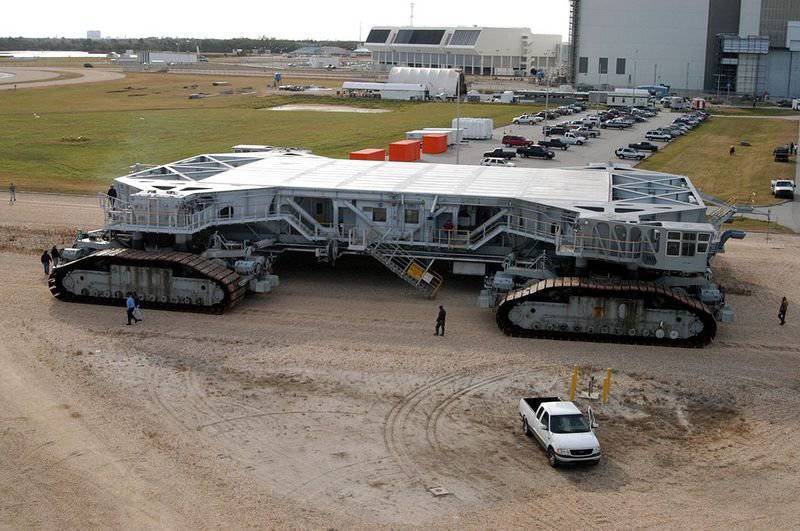 The CT-2 transporter is a deep modification of the previous version that has lived a long enough life, having worked at the American cosmodrome for more than 45 years. In addition to new roller bearings (a total of 88 new roller bearing assemblies are used), which are installed in traction motors, an improved lubrication system has appeared on it, as well as a completely new temperature monitoring system.

It is worth noting that the CT-2 conveyor has great potential. This engine has two 16-cylinder diesel engines with HP 2200 power. each. In addition, on the conveyor there is also an 2 engine with an 2750 horsepower. each, these engines are designed to operate the electrical system and hydraulic pumps of the machine. In length, the giant conveyor has about 40 meters. The maximum speed that the CT-2 transporter can reach is 3,2 km / h, but at maximum load it does not exceed 1,6 km / h. The conveyor has a huge supply of diesel fuel - 18 930 liters, while the fuel consumption is about 4 liters per 10 meters of track. The track conveyor is able to deliver a launcher and a rocket to the launch site, the total weight of which may exceed 8 thousand tons.

The net weight of the track conveyor itself is 2400 t, while it consists of a cargo platform, which is located on 4-x trucks, each of which has two tracks. In a horizontal position with high accuracy, the platform is held by a special hydraulic system. Each of the conveyor tracks includes 57 articulated tracks, with each track weighing on the order of 900 kg. The 2 dispatcher, which is located at each end of the chassis (front and rear of the vehicle), controlled it. 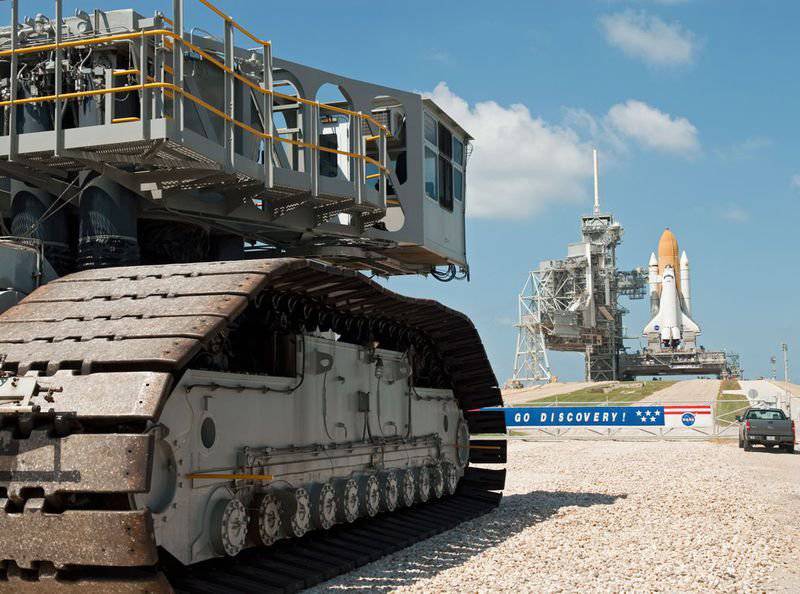 In the American space industry, these giants have been applied over the past 45 years. Initially, these engines were used to transport Saturn rockets, which were intended for launching the Apollon space program into orbit, and later they were used to transport the Space Shuttle. The modernization of the conveyor, called “Hans and Franz”, is currently not practically affecting its shape and appearance, the overall dimensions of the machine will remain unchanged. Currently, the main work is aimed at replacing the four sections of the tracked drive conveyor.

Currently, the Crawler-transporter-2 is located on the territory of the Vehicle Assembly Building hangar, where work has already been done to replace two of its caterpillar sections (these are sections A and C, which are located on the same side of the conveyor). The replacement of these sections was completed on 31 in January of 2014, currently preparatory work is underway to replace the two remaining tracked sections, B and D, located on the other side of the conveyor. At the same time, engineers are working to strengthen the platform and the CT-2 chassis design.