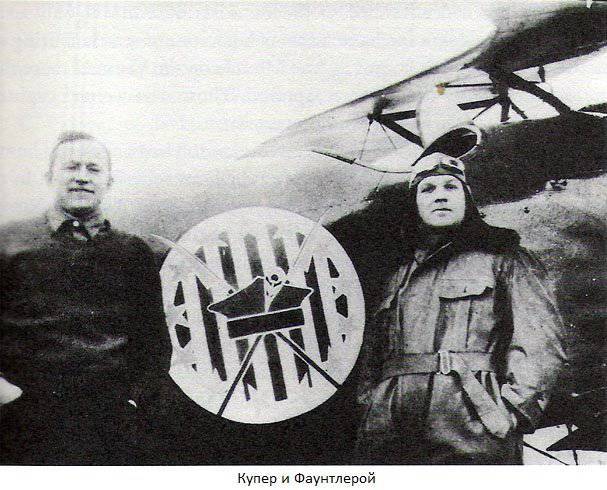 At first glance, the phrase in the title seems absurd, akin to "a submarine in the steppes of Ukraine." However ... it was. It was! Here's a story about how in 1920, American pilots carried Ukrainians democracy.

11 November 1918, near the French Compiegne, the Entente countries and Germany signed a cease-fire agreement. The First World War ended. Poland, occupied by Germany and Austria since 1915, received the desired freedom and began to feverishly develop its statehood. After the priority questions about the flag, the emblem and the hymn were resolved, the question of borders came up. Especially eastern.

Lying to the east of Poland, Germany, though capitulated, did not seem appetizing at all. German soldiers and officers who defeated 4 of the year could well question the very fact of the existence of Poland. And the UK and France did not advise. Another thing is east. There lay the RSFSR, which itself probably did not know how many fronts it had. In each city there is an underground organization, in each province there is a peasant mutiny.

Another is the UNR (Ukrainian People’s Republic), which is compressed daily as shagreen, and the head of which (whether hetman or president) sits out either in Vinnitsa or in Zhytomyr. And Ukraine itself hastily hurriedly joined together Bolshevik troops, and two dozen gangs led by atamans and troupes. In short, abandoned land, take it - I do not want. That Poland and began rake them for themselves.

In 1919, Poland seized a part of Belarus, in the process eliminating ZUNR (West Ukrainian People's Republic), and on 25 on April 1920 of the year began the Kiev operation. In Warsaw, new maps of Poland have already begun to be drawn, with the inclusion of Belarus, Ukraine, Latvia, Lithuania and Estonia (within the borders of the Polish-Lithuanian Commonwealth 1772 of the year). The head of Poland, Jozef Pilsudski, in an interview with an English diplomat, McKinder, said that he was not going to take Moscow, because he did not know what to do with it further. 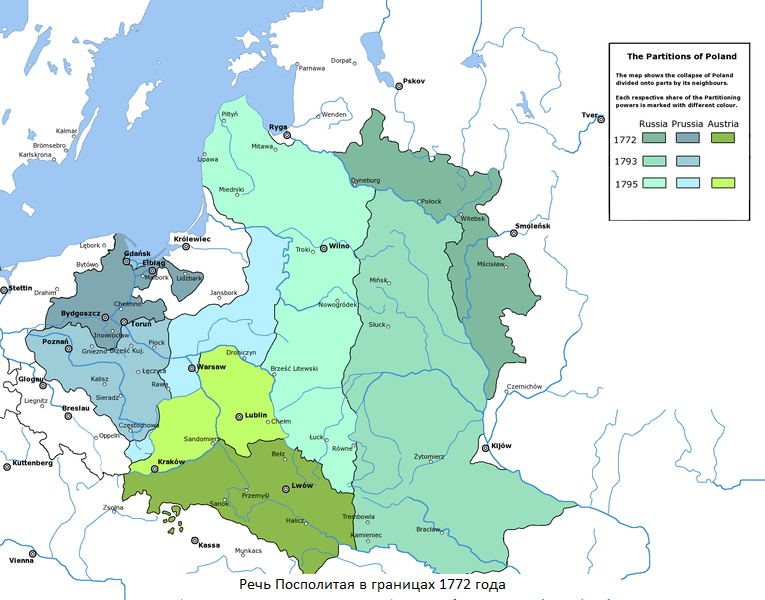 If the expansion of Poland at the expense of the western neighbor of the United Kingdom, France and the United States, to put it mildly, did not approve, the idea of ​​the "eastern campaign" was favorably received by them. Poland seemed to them a kind of sanitary cordon between a quiet Europe and a troubled Russia, obsessed with the idea of ​​a world revolution. And the wider this cordon, the better. And so that the campaign was successful, Poland was promised the widest support. Be brave, the West will help you!

How the West helped

The West really helped. Only France supplied the Polish army with 1920, 1500 guns, 290 airplanes, 2600 machine guns, 327.000 rifles, 250 vehicles. But equipment without a person is dead, an army without officers is just an armed crowd. Therefore, in the Polish General Staff the French speech sounded as often as the Polish one. The British also helped, and the US, in addition to military supplies, took the trouble of organizing the Polish Air Force.

By making such commitments, the States did not really want to advertise their participation in the Polish-Soviet war. A mediator was needed who, having all the powers, would have acted on his own behalf. Everything had to look like a volunteer movement based solely on the personal initiative of each individual. That mediator was Merian Cooper.

Merian Cooper was clearly not born for a quiet life. Enrolling in the naval academy, he soon abandoned her for the sake of journalism. Fire, flood, shootout - Cooper is right there. But he obviously lacked adrenaline. In 1916, 23-year-old Cooper fought against Pancho Villa as part of the National Guard on the US-Mexico border. In 1917, Merian graduated from the flight courses and, as part of the American Expeditionary Force, went to Europe for the First World War. He was shot down, captured. In November, Germany surrendered, and Cooper got his freedom.

Merian did not return to quiet America. The blood just boiled in it. Even after the end of the war in Europe, there were enough hot spots.
28 February1919, Polish units attacked Soviet troops, and in March, Cooper became an employee of the Lviv branch of the American humanitarian mission. Do not think about what, just so it coincided.

I wonder what functions within the mission was performed by the combat pilot Merian Cooper? Probably handed out humanitarian cookies to Polish soldiers. 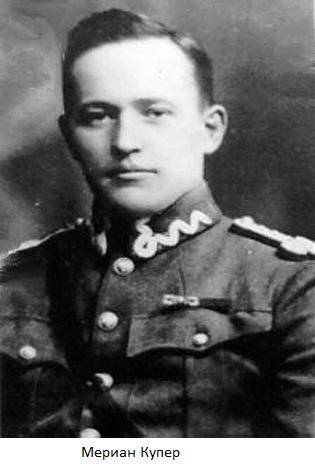 This is someone who was offered such a delicate mission. Naturally, the hot guy Cooper accepted the offer and went to look for volunteers.

In September, the first American pilots, recruited by Cooper, arrived in Ukraine under Lviv 1919. Delivered them to the ambulance as patients with typhoid. According to the agreed status, the pilots were reduced to one squadron, and they were to be used exclusively for conducting combat operations. Mechanics and maintenance personnel in the squadron - Polish. The squadron commander is Major Cedric Fountleroy.

So in the Polish army appeared 7-I combat squadron named after Tadeusz Kosciuszko, whose pilots spoke in English. All the pilots were dressed in Polish uniform, but their citizenship was no secret to anyone. The Typhus Men did not hide it themselves. In the squadron emblem, elements of the US flag were easily guessed. The unit was often visited by the US envoy to Poland, Hugh Gibson, who was awarded the title of "Honorary Squadron Member".

Inhospitable Ukrainians and the first loss

Unlike the Poles, the local Ukrainian population did not see in the arrived Yankees either rescuers or brothers arms. First, unknown persons set fire to the airfield hangar. The fire was extinguished, the guards were doubled, the suspects were arrested. It did not help - a warehouse with weapons flared. Then the aircraft repair shops, equipment warehouse, and equipment warehouse burned alternately. Shocked by such “hospitality”, the Yankees counted the losses.

In November, Jozef Pilsudsky arrived in Lviv. A parade was held in honor of the distinguished guest. We decided to show off the skill and the American pilots. And really surprised: one plane crashed in front of everyone, the pilot was killed. This was the first loss. But not the last.

With the beginning of the Kiev operation began combat missions. The Americans bombed railway stations, destroyed bridges, attacked the positions of the Red Army. Bombed Zhytomyr, Radomyshl, Berdichev, Cherkasy. As the Polish army advanced to the east, the home base of the 7 squadron moved. At the end of May, the Americans were under the White Church. 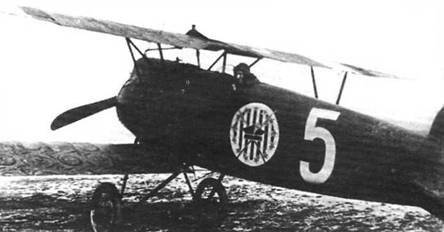 They made several sorties daily for the purpose of reconnaissance, and yet they missed the First Mounted Horse. Only 25 in May, one of the pilots discovered a convoy of Red Army soldiers, but it was too late.

Budyonnovtsa broke through the front. The retreat began, sometimes turning into flight. Now 7-I squadron moved in the opposite direction - to the west, only much faster. From the airfield near Belaya Tserkov, the pilots flew off at the very last moment, already to the hum of hooves and the army-guard “Give!” Three airplanes, which did not have engines, had to be burned. They landed in Berdichev, but they also had to carry their legs from there. Two faulty airplanes did not even have time to burn. Under Fastov, they were nearly captured along with their planes. Saved, but the entire stock of ammunition and equipment had to be thrown.

Together with the 9 th Polish squadron, they settled under Kazatin, from where they flew to the areas of Lipovets and Ruzhin. They threw weapons and foodstuffs to the Polish units surrounded there, accompanied the retreating units. They bombed pontoon ferries. The respite was very short.
6 June Budennovsky again broke through the front, and again the Yankees were saved by a miracle. The squadron commander Fauntleroy, threatening with a pistol, literally "snatched" the railway platforms for his aircraft. The pilots of the 9 Squadron fled, leaving the airplanes to Budennovsk.

The activity of American pilots reached its peak at the turn of August-September, during the defense of Lviv. Fauntler transferred to the beginning of the whole Aviation 6th Polish Army. New American pilots arrived who reinforced the Polish squadrons. Each pilot took off 4 to 5 times a day. Budyonny reported that his units were attacked from the air at least 3 times a day. During the August 6th, only the 17th Cavalry Division lost about 100 soldiers and the same number of horses killed and wounded from air attacks. Due to the strong opposition of the aircraft, the offensive by the division was stopped.

On the other side of the front, General Pakhutsky spoke: "If it were not for the American pilots, we would all have come to an end long ago." During the 16-17 of August, the pilots made 127 sorties, dropped 7700 kg bombs, shot 25.000 cartridges.

In the evening of August 18, Budyonny received an order to stop the attacks on Lviv and go to rescue Tukhachevsky. The battle for Lviv ended, the disaster of the Western Front began.

On this you can and finish. Cooper was shot down, captured, fled. Subsequently became one of the founders of the “Pan American”, left a mark in aviation. Carried away by cinema, in 1933, he made a film about a giant gorilla caught in the jungle and brought to New York. The film was called "King Kong", maybe someone heard.

Fountleroy was also shot down, but he was more fortunate, he reached out to his own, he survived. Both of them, Fauntleroy and Cooper, in addition to their fees, received from the Poles under the Order of Virtuti Military.

About the remaining pilots 7-th squadron is known and even less. Even the data on their number differ, or 10, or 20. There are a few names left, photos and a grave at the Lviv Memorial for those who are very unlucky. 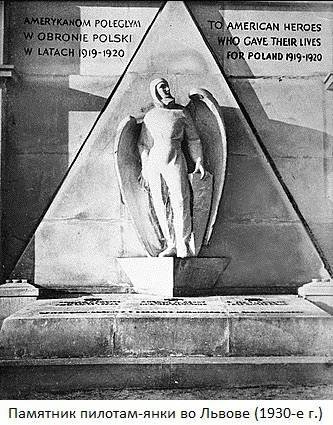 "American Dream", which is not necessary

That was the first meeting of Ukrainians with the carriers of American democracy. This is not to say that it was pleasant. The bombs dropped on Zhytomyr, Radomyshl, Berdichev, Cherkasy - is this the “American dream” that you want to reach so much? And let almost a hundred years have passed, and the world has changed, and we have changed, and America is different, but still ... 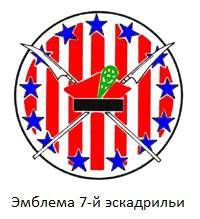