Whom Obama got scared in Russia? 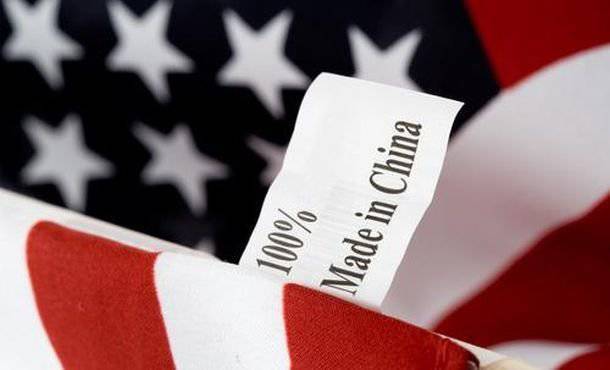 The official delegations of 60 countries, including more than 40 heads of state, flew to the opening of the Sochi Olympics. This is more than the combined games in London (2012) and Vancouver (2010). However, Barack Obama ignored the international sports festival, and his excuses surprised everyone with their infantilism ... Naturally, political scientists had their own versions.

So, 44 th president of the United States explained his absence in Sochi by not wanting to distract fans from the competition. “It’s much more interesting for the audience to watch the struggles of our incredible athletes,” he said. The semi-official version of the “boycott”, which the Western media hint at in direct terms, is the White House’s disagreement with the amendments to the RF Law “On protecting children from information harmful to their health and development”. 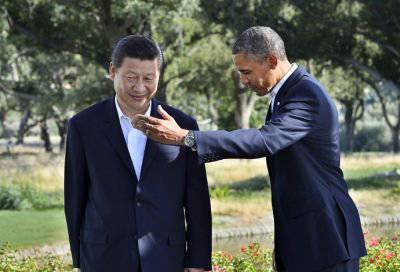 But perhaps one of the main reasons for such a decision by Obama is the unwillingness to meet with the head of the People’s Republic of China? For the past six months, Obama has deliberately missed events involving Xi Jinping. Surrounded by many foreign colleagues, the US president is afraid to hear questions from the Chinese leader that he does not have a clear answer to.

Let's start with the fact that now relations between Beijing and Washington are strained to the limit. First, the United States has begun to implement the 2012 Strategic Program of the Year, which aims to shift the vector of national policy towards the Asia-Pacific region. This place of the earth is the sphere of the vital interests of China, but the American plans envisage the redeployment of more than half of the military power of the Pentagon here. In the region, territorial conflicts have already erupted with the participation of China, the escalation of which lies entirely on the conscience of the closest allies of the United States - South Korea and Japan. In general, Beijing today, not without reason, believes that Washington with a long-range view forms the Asian anti-Chinese axis.

Hence, the leadership of the Celestial Empire has a quite reasonable question, is it worth it to finance such an enterprise? After all, China is now the largest creditor of the American economy. While she worked like a clock, solving, among other things, the employment problem of China’s vast labor market, it was possible to close our eyes even to the ripening political differences. However, by the autumn of 2013, it became obvious that the White House had little control over the economy of its own country, and government default was only a matter of time.

Recall, the volume of US public debt is growing much faster than the economy, sometimes overcoming the bar set by parliamentarians. In this case, the president, in order to continue to legally print the dollars necessary to fulfill obligations to the budget and creditors, comes to Congress. Trade begins, the purpose of which is to persuade both chambers of parliament to adopt a law on increasing the debt ceiling.

The last potential budget crisis in the United States was averted at the last minute, with Beijing fussing almost more than the White House. Say, Chinese Premier Li Keqiang bombarded the US State Department with his “extreme concern”, Central Bank Deputy Chairman Yi Gang implored American colleagues to “find wisdom to solve the problem as soon as possible,” and the official PRC mouthpiece Xinhua called on all of us to get rid of the dangerous dependencies, "destroying the Americanized world." Xi Jinping wanted to personally speak with Obama at the APEC summit, which was held in October. But Obama did not come to him, citing participation in those very budget debates. As a result, Congress extended the “borrowing opportunity” for a few more months. The new term expired ... 7 February - the opening day of the XXII Olympic Winter Games in Sochi. 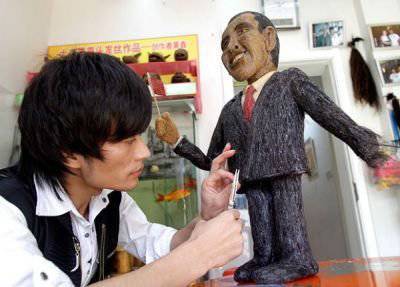 Meanwhile, in mid-January, the website of the Ministry of Finance of the PRC announced that Chinese stocks of US treasury bonds rose to a record amount - $ 1,317 trillion. In addition, China’s dollar reserves reached 3,82 trillion.

On the one hand, the "ocean of money supply" speaks of the economic power of China. However, it is also a difficult burden, as the management of such huge reserves does not provide a special variety of options. Of course, logically, the Chinese should have long decomposed American obligations in various “baskets”, but the global sale of the dollar would not only bring down its value, but, above all, undermine China’s own currency reserves. Therefore, Beijing has no choice but to continue to lend to the US economy, buying more and more new US government bonds for "their" dollars. “China went to bed with our treasury for too long and will not be able to get out of it too quickly,” Time magazine says ironically.

It is strange, however, why journalists forget what will happen when China gets out of it. Even if slowly. (“The journey of a thousand whether begins with the first step,” said Confucius). After all, although the economies of the United States and China are as interdependent as possible, the latter is in a far better position. The United States simply has no choice: there is nothing to replace Chinese investment — there is no other player on the global market who could saturate US domestic consumer demand with its goods. There is no country in the world that could, by exchanging its products for dollars, immediately return them to the American circulation in exchange for other “pieces of paper” - US government treasury bonds.

So, whatever the illusions and allegories of American journalists themselves, the fact remains: the USA is a drug addict hooked on the “Chinese needle”.

Given the whole alignment, it becomes clear why Xi Jinping had every reason to worry about the next US technical default, scheduled for February 7. It is logical to assume that Obama did not fly to Sochi due to fear of listening to Chinese claims. After all, with all the virtues, the first black US president is not the king of impromptu. Such a squabble, and even in the presence of high-ranking third parties, would force the head of the White House to be as tough as possible "here and now." As a result, such a force majeure could push China to more decisive actions against the “Americanized world,” above all, to begin the painful process of getting rid of American bonds and dollars.

In order to prevent this, having retained a more or less decent mine, the US president at times of economic turbulence has to significantly limit his foreign policy publicity. 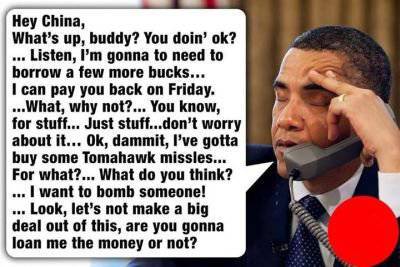 ... Only 12 in February, the Congress finally approved a bill on the next increase of the country's state debt limit to 16 in March 2015. This means that the problem of a probable default by the USA is not solved again, but only postponed. That is, Obama’s tactically correct decision “not to tease the Tiger” in the future is only an attempt to postpone the inevitable.

Sooner or later, Beijing, despite the traditional conservatism, will have to abandon the legacy of "previous generations of leaders" and begin to carefully diversify reserves.

The question is not whether it will happen or not. The question is when this happens. But in this case, the US domestic market awaits chaos. The US economy will lose a cheap Chinese product and a cheap Chinese dollar. Consumer prices and lending rates will soar, millions of Americans will suddenly go bankrupt. On the other hand, the Chinese dumping of the dollar on foreign markets will cause the American currency to become cheaper, which will immediately affect the capabilities of the Pentagon, putting the US military and political ambitions in jeopardy. In particular, in the Asia-Pacific region ... So, how quickly China enters its economic super-weapon depends, to a large extent, on the White House itself.

In the meantime, we can state one thing: historical The fact has happened - now Beijing is not afraid of Washington, but vice versa. So in this tandem of the two powers, the role of senior partner finally passed to China.