We have yet to answer for Sevastopol. By "a new campaign against the Crimea" in the Turkish media 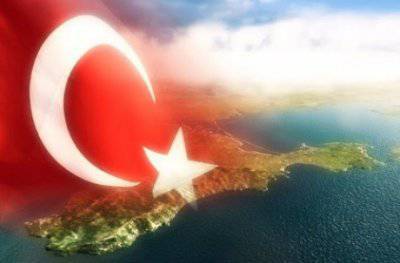 A few days ago an article appeared in the most influential Turkish newspaper Hürriyet, in which the author courageously penetrates the idea of ​​230 years into the past. Then the Kuchuk-Kaynardzhiysky treaty between the Russian and Ottoman empires, under which Crimea withdrew to Russia, was concluded. But not just like that, but with a burden - if the peninsula is handed over to someone else or declares independence, Istanbul has the right to take it back from Moscow.


According to the author, the agreement is still valid and Turkey could use its right back in 1991, when Crimea became part of the third state - Ukraine. However, then she graciously took into account the “changes in the general world conjuncture” and refused to take this step. Today, the situation in Ukraine has reached the point that the Crimean authorities have openly declared their readiness to secede from Kiev in the event of a victory for the maydanschiki. According to the Turkish author, this step will give his homeland the legal right to “take control of the Crimea” and intercept the rebellious peninsula before it tries to reunite with Russia.

In parallel, in another respectable edition of Zaman, an anecdotal column of exposing quality appeared. Allegedly, a certain American scientist reread the same Kuchuk-Kaynardzhiysky treaty and found that everything in it is not the way it is considered. What was said about the sultan, was actually related to Russia, and vice versa. In fact, the treaty strengthened the importance of the sultan as a spiritual leader and increased the authority of the Caliphate and so on. (To present the level of adequacy of the publication, it is enough to present a U-turn somewhere in Kommersant under the heading “Russia ponders territorial claims on Turkey, China and Italy thanks to the discoveries of Academician Fomenko”).

However, the article is not fiction, it appeared where it appeared. Consequently, the Turks' interest in the Kucuk-Kaynardzhiy Treaty broke out not by chance, and we have another information campaign. Readers carefully hinted that a geopolitical fork emerges in the Black Sea region, which will not allow Russia to intensify. For her, the Crimea is practically useless as part of the anti-Russian project “Ukraine”, but as soon as it leaves the project, Turkey immediately gets a reason to get its hands on the peninsula. It would seem a win-win option.

Now a few words about why this is not so. Contract in question, long ago lost force by mutual consent, that is, after Moscow and Kars treaties 1921 Then, the Russian Federation and the Republic of Turkey, the two formed after the First World State, recognized the territorial integrity of each other within the current borders, as well as abolished the effect of all the agreements that have been concluded between governments earlier. Everything that happened up to this point, has lost validity.

Fork here, however, is really there, but quite different.

The Republic of Turkey is not the successor of the entire Ottoman Empire, but only parts of it. At one time, this allowed the Ataturk Republic to remove international financial control from the country and did not pay the Ottoman debts in full. So modern Turkey is a young democracy, which is about to become the first hundred years old. Even Istanbul as a subject of geopolitics is no longer there, but there is Ankara. For this reason alone, the Turkish Republic is not worth trying to take the place of one of the parties to an 230-old treaty. If she is not the Ottoman heir, then there is nothing to talk about, and if she is, then in the 1921 year everything has already been said. The current Russia, by the way, has paid off the debts of the past government in full - and is the undisputed legal successor of the RSFSR.

However, there is still a nuance. Declare yourself today Turkey a full-fledged successor to the Ottoman Empire, as the long-cocked trap of Armenia will shut on its budget. The candidate country of the Customs Union has a powerful lobby in France, and together they sleep and see how to make Turkey accept responsibility for the Armenian genocide. Until now, the snag was that it was no less absurd to condemn Kemalists for the crimes of the old Porta than the guards of the Islamic Revolution in Iran for torturing the Shah’s secret police or the Bolsheviks for suppressing peasant revolts in Tsarist Russia. Armenian historians and publicists are still publishing serious materials entirely devoted to proving the actual continuity of regimes in order to claim compensation from Turkey.

It’s another matter if Turkey itself recognizes itself as the legal successor of the Ottoman Empire. The case will be smelled by an international tribunal faster than the word “Crimea” is uttered in Ankara.

Of course, this does not negate the well-known sad fact - in the 25 years of hard times, Turkish investments and assistance programs rained down on the peninsula, mainly improving the living conditions of the friendly Crimean Tatar population and promoting its culture. Up to the absolutely legal representation of the Ministry of Religion of Turkey in Yalta, which is responsible for the expansion of Islam. The demographics began to shift, long before the “People’s Rada” a ready-made alternative government appeared - the Mejlis. It was in the Crimea, and not somewhere else, that the black flags of the Islamists flashed on the demonstrations. These, too, did not waste time in vain, their preachers leaked to the peninsula as if they were going home. In this light, the mention of “caches” and “help from Turkish comrades” in the recently revealed correspondence of maydanschiki with people from the Mejlis does not surprise anyone.

This is a reality, the Crimea is really not in a position to simply take and dissolve with Kiev. It can be prevented by one force - not a moss-rich contract, not a Turkish army or maydanschiki not powerless in the Crimea, but a local underground equipped, trained and armed by Arabs and Turks. But, as we well know from Libya and Syria, not a single such underground is able to act without constant support from abroad, and it, in turn, requires the active support of citizens of a foreign country.

Probably, this we owe the appearance of populist articles in serious journals.

Ctrl Enter
Noticed oshЫbku Highlight text and press. Ctrl + Enter
We are
What you didn't want to know about EnglandThe Bergman trail to the North Caucasus
Military Reviewin Yandex News
Military Reviewin Google News
86 comments
Information
Dear reader, to leave comments on the publication, you must sign in.