Sochi Olympics as a mirror of American degradation

February 19 2014
101
The ruling media of the United States never got out of the Cold War era. The Fourth Power continues to denigrate the Russians and their Olympics in newspapers, magazines, the Internet. And it cannot be said that Americans have a special imagination. American propaganda is completely degraded. In the US, journalistic thinking itself, which is still based on the canons of the Cold War, has degraded. The biased hacks seemed not to read the speeches of Ambassador McFaul about the "reset". While McFaul was outraged by “anti-Americanism,” journalists continued to do everything to ensure that this anti-Americanism completely devoured McFaul. Do you know what we are dealing with? With another failure of Obama. Double standards devoured itself. 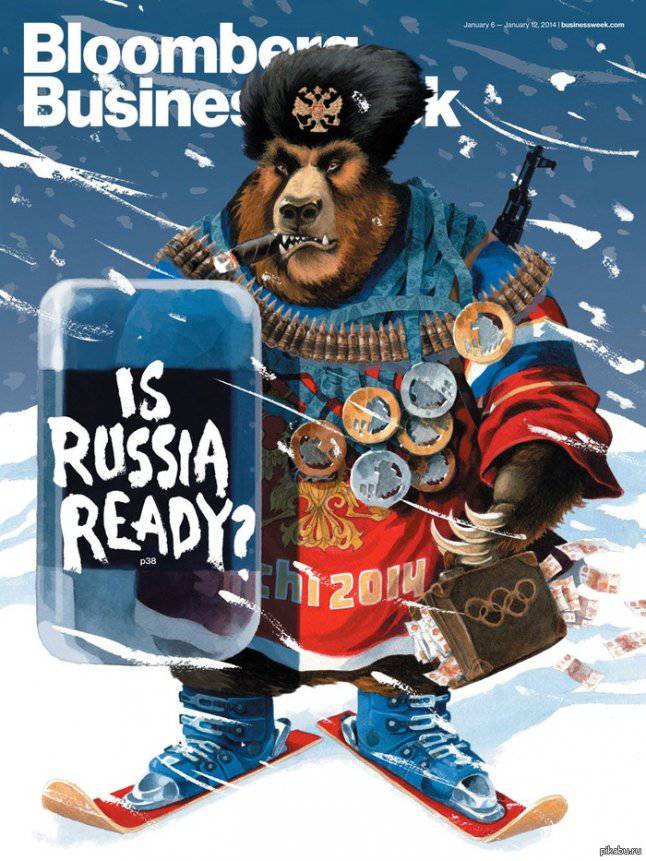 In the article “Lies about Russia” published in “The Nation” (USA; translation source - "InoSMI") Stephen Cohen said that coverage of events in Russia by the leading American press is not just degrading, but degrading for many years. Vicious practice in the media has become the norm.

“Notable exceptions exist, but there is a common pattern. Even in the venerable editions of the New York Times and the Washington Post, the authors of informational messages, editorials and comments no longer follow traditional standards of journalism, often do not communicate important facts, do not describe the context, do not make a clear difference between reports and analytical articles, give at least two different political and expert points of view on major events and do not publish opposing opinions in the columns of commentators. As a result, the American media today are writing about Russia less objectively, less balanced, with more conformism. And the ideologies in them today are only slightly less than during the times of Soviet Russia and the Cold War. ”

"Irresponsible flogging" Putin is satisfied with centrist, liberal and progressive media - from the New York Times, the Washington Post and the New Republic to CNN, MSNBC and HBO. On the last channel in the “Real Time With Bill Maher” program, Howard Dean, who had no previous deep knowledge of Russia, said to the approving sounds of the participants: “Vladimir Putin is a gangster.”

For many weeks, poisonous materials were devoted to the Sochi Olympics. Before the start of the games, the New York Times declared a new sports complex in Sochi “dystopia in the Soviet style” and stated in the title: “Terrorism and tensions, not sport and joy”.

On the opening day of the Olympics, the same newspaper found a place for three anti-Putin articles and editorials. Only the Washington Post was able to make up for it in this competition. Facts, notes Comrade Cohen, had no meaning for the editorial board.

The American leading media have exploited the threat of terrorism in Sochi so immorally that it "looked like pornography." The Washington Post, which for its attitude towards Russia received the nickname Pravda on Potomac, became the personification of such media habits, the author writes. One sports commentator even managed to turn the Olympiad into a "contest of willpower" between the despicable Putin's "gangster" and the terrorist "rebels." In the eyes of the media, the two “warring parties” became so similar to each other that the reader had doubts: for whom should he hurt? .. And American journalists in advance awarded the victory to the terrorists.

“What about the decision of Barack Obama to send a low-level delegation to Sochi, including retired homosexual athletes? In August, Putin literally saved Obama as president by persuading Bashar al-Assad to destroy his chemical weapon. Then Putin contributed to Obama’s widely advertised approach to Iran. Wasn’t Obama supposed to go personally to Sochi, either as a sign of gratitude to Putin or as a sign of solidarity with the Russian leader in the fight against international terrorism, which strikes at our countries? Why he did not go, because he was trapped in his short-sighted policy towards Russia, or because the American media misrepresented the various reasons given: the granting of asylum to Edward Snowden, disagreements over the Middle East, encroachment on the rights of gays in Russia Ukraine? Whatever the explanation, as Russian intellectuals say, when faced with two bad alternatives, “both are the worst.”

Media attacks on the Olympics in Russia, we add to this, have unforeseen casualties. Among the latter are athletes from completely democratic states. These victims could not even suspect the possible reaction of the homeland and the “international community”. They are athletes, not politicians; their naivety, apparently, can be forgiven in the same way as the naivety of Wodehouse, who was in the internment camp during World War II and who agreed to conduct broadcasts for German radio (however harmless), forgave and explained to the world J. Orwell.

The other day Canadian speed skater Brittany Schussler published a snapshot on Twitter: she and Putin. This is a horror: Schussler not only took pictures with the “tyrant” and the repressor of the homosexuals, but even among others she asked for such a picture of the Russian president! .. Brittany was immediately branded by western inhabitants. Compatriots felt that Schussler supported "a tyrant who persecutes LGBT people." Harassment has reached such proportions that the athlete had to remove a photo from Twitter. She had to make excuses: she wrote that she was misunderstood (this is now an ordinary excuse, even Obama does not hesitate to use it). 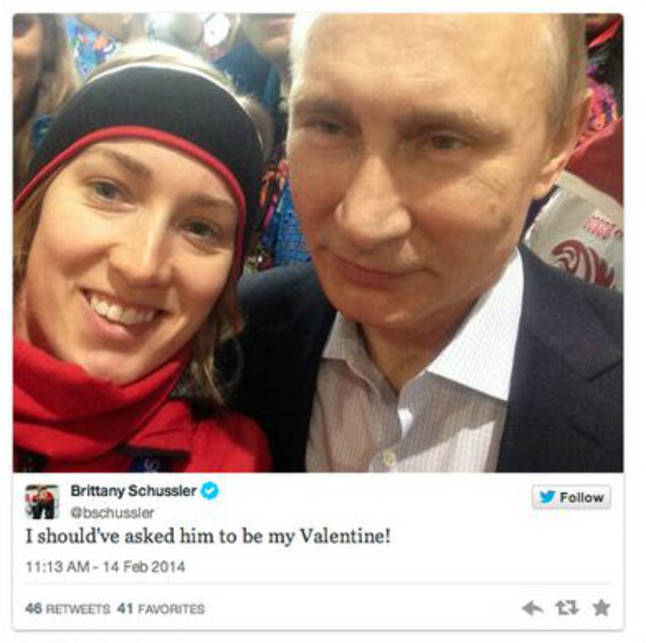 Interestingly, there were those who supported the frightened girl. One user called the critics of the athletes not somehow, but “intolerant fools”, which is quite remarkable. By such, he means those who are "obsessed with one topic and confident in their own rightness." He gives them advice "to return under the stone from which they got out."

And indeed, homosexuals, if you look, are completely deprived of tolerance (tolerance) towards, say, other people. That is, those who scream the most about tolerance are hardly any different. You are taking photos with Putin - a supporter of the tyrant. Rejoice at the reception in Sochi - the enemy of the blue. And in general, the Russian influence is pernicious. Here we are, LGBT, are good. Criticism in a similar spirit is no longer a degradation of the personality, it is nothing but its complete disintegration. Schizophrenia. Everything is interpreted in an extremely narrow sense and is subject only to him, this narrow sense. It is clear that there is no tolerance even close. On the contrary, there is complete intolerance for everything.

Another comrade advised Brittany not to apologize and added that even though some people think that “the world should only revolve around the gay community,” it is not.

But the voice of brawlers has always been stronger than the voice of reason. Schussler is not the only victim from Canada.

As the media writes, Gladys Stojko, the wife of a Canadian figure skater, also deleted the photos from the meeting with Putin. Countrymen and countrymen with their comments so frightened her that she deleted the account at the same time.

Recently, an initiative comrades from Moscow was created site "Rumors of Sochi"where fake news about the Sochi Olympics classified and numbered.

In the US, they write about rusty water from Sochi cranes, referring to a photo on Twitter. In fact, the picture was used in 2012 to illustrate the news about the low quality of drinking water in Ukraine.

The “news” about the massacre of stray dogs in Sochi is also savored. There is an illustration - but it is also taken from the past, and also Ukrainian. In 2012, she illustrated an article about the burial of dogs near Donetsk.

But the toilet is supposedly in Sochi: “Sochi is a territory of friendly people. Here you can sit in the company of friends with a glass of beer right on the toilet. "Please pass me toilet paper."

Rows of toilet bowls stand along the walls. Sit down, do not get bored. The main thing, do not forget to take off your pants. Or a skirt.

The site denies: “In fact, this photo was taken in Russia, but in a different place. This is a toilet at the University of Kazan, and the photo was taken by Max Lomakin for the BBC.

They write in the West that Putin stole all the money for the infrastructure support of the Olympics, and then handed them over to the police so that you could make the unfortunate gays happy. There was absolutely no money left to build, so the gloomy Soviet reality surrounds the athletes and guests: collapsed houses, scattered roads, homeless people. Well, but there is an inscription: “Welcome to Sochi!” Refutation: the photo was taken by Kai Pfaffenbach (“Reuters”) in Sochi, but February 19 is 2013 of the year.

The money that the door handles were inserted into was also stolen by Putin. Or his officials, what the difference. American journalist Barry Pettsky tried to open a hotel room, but the door handle remained in his hand. Quote from the site: “Barry himself two days later wrote that this photo was not taken in Sochi. In addition, Barry said a wonderful phrase: "The best part of every Olympiad is about ... the organizers."

More fakie: in Sochi, paint the grass from the spray guns; the person responsible for the undisclosed Olympic ring is killed; hacker attacks on fans' computers are conducted, but not simple attacks, but gay ones; in Sochi, it is forbidden to throw used toilet paper into toilet bowls and it is recommended to eat it, etc.

In principle, much of this should be classified as a satirical news (something really applies to them) and just laugh well. However, reprints from Twitter or The Daily Currant (an exceptionally satirical newspaper) by mainstream publications like The Washington Post are no longer funny.

And that's what said on the eve of the Olympics, American President Barack Obama: "If Russia does not have gays or lesbians among its athletes, this only makes its team weaker." And this is not a fake. And it is not surprising that after these words the journalists got into Obama’s dirty laundry. Everything was done according to the saying: “For what they fought, they ran into it”. Now the world community considers Barak Hussein to be a rascal and the first blue president of the United States. Already It revealedthat several years ago, the future president often visited not only gay nightclubs, but even special saunas.

Well, is not it a degradation?

Observed and commented on Oleg Chuvakin
- especially for topwar.ru
Ctrl Enter
Noticed oshЫbku Highlight text and press. Ctrl + Enter
We are
Results of the week. “You can legally go. It is difficult to reachMichael McFaul and Russian prejudices
Military Reviewin Yandex News
Military Reviewin Google News
101 comment
Information
Dear reader, to leave comments on the publication, you must sign in.