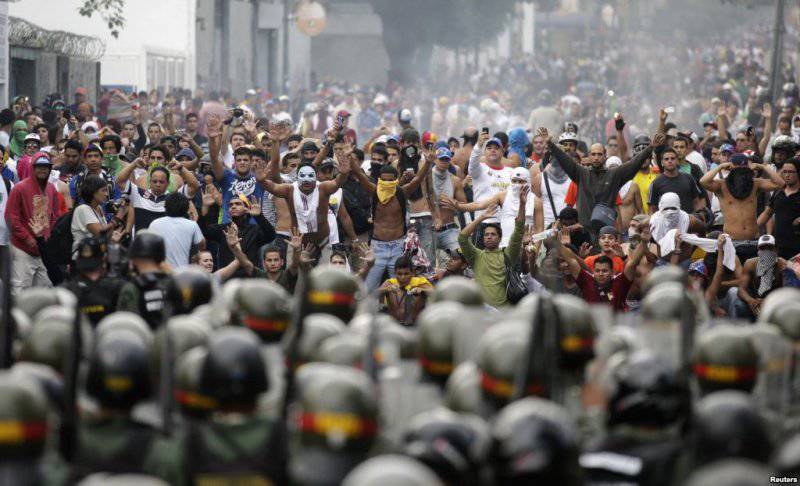 Venezuela is shocked - February 12 in Caracas there were major clashes between opposition supporters and the ruling party. It seems that the wave of violence that has swept over the city of this Latin American republic and inspired from abroad has not yet subsided: the opponents of the current president of the country, Nicolas Maduro, at least decided to test his strength. The maximum program is a complete change of power. Oil-rich Venezuela has long become one of the main goals of American policy, and it seems that in Washington it was time to clean up the Venezuelan oil fields to their hands.

February 12 in Venezuela, one of the largest provocations against the legally elected government took place: pogroms took place on this day in Caracas, as well as in the cities of Merida and Tachira. There were no victims.

The main demand of the rioters was the resignation of President Nicolas Maduro, although in recent days the protesters have demanded that the authorities also release the extremists who were detained during the riots: these people went to jail because they stormed the prosecutor's office, attacked the police and engaged in vandalism. In a fit of rage, “peaceful protesters” damaged even the playground with children's rides, located next to the prosecutor’s office building.

The demonstrators were well armed and trained. They carried body armor, masks, metal rods. Prepared in advance and the party "Molotov cocktails" - bottles of incendiary, which caused a lot of harm to law enforcement. During the riots, the mob used firearms. weapon, which led to the death of several people. In turn, the police used only tear gas and rubber bullets.

It is significant that the February events in Venezuela are similar not only to the Ukrainian Maidan, but also to the attempt to overthrow Hugo Chávez in 2002 year. Then the country suffered from a series of pogroms, but the military, remaining loyal to the president, stopped the insurgency. Thanks to the decisive actions of the armed forces, in the following 10 years the opposition did not dare to disturb the peace, and preferred to sit in parliament.

February 12 pogroms coordinated their actions through social networks. It turned out that the actions of violence had been prepared in advance by the organization “Narodnaya Volya”. Its leader is Leopoldo Lopez - a politician, known for his calls for the overthrow of the current government. He has two entities - legal and economic, and he was once actively involved in "parliamentary" politics, without calling his supporters for violent actions.

Lopez took part in the presidential election of 2013 of the year, but withdrew his candidacy in favor of Enrique Capriles-Radonsky, the main opposition candidate who lost to Nicolas Maduro with a small margin. It was after these elections that the situation changed dramatically: Leopoldo Lopez, with the radical wing of the opposition, became the spokesman for his interests. For the sharp statements of Lopez in recent months, nicknamed "the face of fascism."

It is known that the disgraced politician cooperates with the CIA, and does not even hide it. Immediately after the riots began, the Prosecutor General's Office became interested in Lopez, and February 13 put him on the wanted list. It is said that the oppositionist was going to flee to the USA - it seems that he was prepared for a cushy job as one of the “victims of the regime”.

Also on the list is Fernando Gerbassi, a retired vice admiral and former ambassador of Venezuela to Colombia. Gerbassi led the unrest in Venezuela adjacent to the Colombian border. This fact suggests that the States are ready to use its neighbors to organize the fight against Nicolas Maduro. Paramilitares detachments have already arrived from Colombia in Venezuela - armed groups that fought against the ELN and FARC partisans. Militants are concentrated in the Venezuelan states of Tachira, Zulia, Merida and Barinas, where the recent pogroms have become the most violent.

Crossing the border, members of Colombian groups can move freely throughout the territory of Venezuela, since they are almost no different from the local population. Not the fact that Venezuelans took to the streets of Venezuelan cities. However, the ideas of the militants are shared by some students who act, rather, as human shields, than as full-fledged "fighters against the regime."

Interestingly, José Vicente Rangel, a Venezuelan political scientist and broadcaster, warned about the possible conduct of subversive operations in Venezuela back in 2013. In his television program Confidential, Rangel spoke about foreign fighters who are being prepared by US intelligence agencies for invasion of Venezuela.

It became known that Leopoldo Lopez, the leader of extremists, during his last visit to the United States visited Miami and talked with militants who are being trained in a special training camp Los Cayos. The leaders of this camp are Cuban migrants. Also in Miami is the focal point connecting the Venezuelan conspirators with their American patrons.

Smugglers facilitate the “work” of the rebels: the rampant crime on the long Colombian-Venezuelan border makes it possible to transport people, weapons and equipment from Colombia to Venezuela without any problems. In addition, mafia groups undermine the Venezuelan economy. So, smugglers massively export consumer goods available here from Venezuela: in poor Colombia, they can be sold at exorbitant prices. Separately, it is necessary to mention the smuggling of fuel, fuel and automobile parts: very often, gasoline is simply not brought to the border of Venezuelan gas stations, and immediately poured into cans and sent to Colombia.

Colombian paramilitares help criminals. Militants arrange reprisals against customs officers and border guards, ensure the protection of goods. Of course, their services cost money, so the armed forces receive a portion of the proceeds from the sale of smuggled goods. Smuggling is one of the most important sources of funding for mass protests on a par with grants coming from abroad.

But it seems that the rebels have no chance of overthrowing Nicolas Maduro: the president has publicly stated that he is not going to give up "not one millimeter of power." So Maduro feels the support of the people and the army. If the military defend the state, as happened in 2002, the militants will be forced to return to the mountains of Colombia.

The moderate opposition also condemns the radicals. Enrique Capriles-Radonsky, a former rival of Nicolas Maduro, disavows extremists. The only thing the main oppositionist wants is the readiness of the president to answer for his actions. According to Capriles, the Venezuelans will never kill each other, and they will not succeed in sowing distemper in the country.

Maduro is ready to listen to criticism from the moderate opposition: he intends to disarm the population, including the guards of volunteers who defended the state. Venezuelan political experts consider such a decision sensible, since the squads are incredibly difficult to lead, and they can get out of control by chance: where are the guarantees that unprepared activists will not open fire on their own if two patrols clash face to face on a dark street? No wonder that Parliament Speaker Cabello warned warriors that in any situation, calm and common sense must be maintained.

At the same time, Nicolas Maduro relies on the police. We are not talking about the army yet: according to the president, the threat has not yet reached such a level when it is necessary to use military force. However, if the army says its word, the rebellion will quickly come to naught, and turn into a protracted sabotage war - even if the United States and Colombia do not give up their support for the militants. If the extremists remain without foreign aid, the situation of the year 2002 will repeat, and Maduro will forget about the problems with the opposition for at least 10 years.