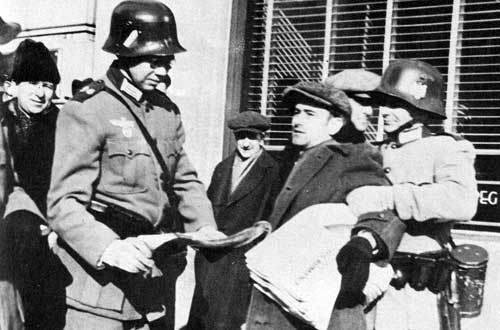 At dawn 19 February 1942, 5000 of the Nazis seized the Canadian city of Winnipeg and declared martial law. Fascist officers arrest Mayor Quinn, Prime Minister Bracken and the entire cabinet. Teachers and politicians are also enclosed in the cramped Fort Harry, who suddenly became a concentration camp with a swastika flowing. By morning, Portage Avenue has been renamed Hitler Strasse. Winnipeg itself has been renamed to Himmlerstadt. Citizens are intimidated, exhausted and powerless. What if? What if? What if? What if this is a terrifying time loop? For residents of Winnipeg, where time makes all sorts of things, such a loop is terribly likely. Nazis' 5000 is, in fact, Rotary Club volunteers in costumes rented in Hollywood. Day If is a great success to intimidate Winnipegians with enormous spending on war. Since then, in the Winnipegians the word "if" strikes terror. In Winnipeg every day - Day If.

What-If-Day or Just If Day - is the day of a training alert, rehearsals for the Nazi invasion of the Canadian city of Winnipeg, Manitoba, and the surrounding areas of February 19 and 1942, during World War II. The invasion was organized by a committee of local credit organizations, led by a prominent businessman from Winnipeg, Mr. Perrin. In fact, the event was the largest military exercises in Winnipeg, but with only one big “but” - the locals did not know about it.

How did it happen?

5000 armed soldiers of the local garrison participated in the exercise. Colonel E. A. Pridham and D. S. McKay commanded the defense forces. The "Nazi" troops were volunteers, the Nazi uniform was rented from Hollywood. The faces of some young people even made up with saber scars. About 60 million dollars was secretly spent on the strangest event in Winnipeg.

Fascist patrols appeared on the streets in the cities as early as 5: 30 in the morning on February 19. The radio host was detained and his microphone was requisitioned for a radio broadcast starting from 5: 45 in the morning. On the morning of 7, an anti-air siren sounded over the city, followed by bombing.

In 7: 03, the fascist German troops began to imitate an attack on a city that was defended by a small group of reserve troops. After 45 minutes, the Nazis were already a mile from the city center. Winnipegians resisted as best they could, but they had to retreat, after themselves they blew up the bridges, the Nazis did not stop anything.

On 9: 30 in the morning, the city surrendered, Brandon, Fin Flon, Selkirk and other small towns capitulated around the same time. Manitoba has become a German province. On the Port Avenue, one of the main streets of the city center, drove a tank. The Canadian flag over Fort Harry has been replaced with a swastika. The city itself was renamed "Himmlerstadt", the main street was named "Hitlerstrasse". All the top officials of the city were arrested (Mayor John Queen, Prime Minister Bracken, was a Norwegian minister, McWilliams is on a visit).

Books related to the symbol of freedom, democracy were thrown out of libraries, burned by the Nazis on the streets of the city. Robbed restaurants, shops, doors of churches slammed with boards. School directors were arrested and schools were disbanded, and one Nazi Truth curriculum was broadcast on the radio. Notifications were placed on the walls of churches prohibiting worship, and priests who objected were arrested. Buses were stopped, and the armed forces searched the passengers. The soldiers even entered the cafeteria of the local insurance company and took the lunch from the workers. Some shops and houses were looted by "Nazi" troops. The Canadian currency has been replaced by fake German Reichsmarks.

The day ended on 5: 30 evenings with the ceremonial release of prisoners, a parade and speeches of released officials with loud slogans "It should not happen here!", "Buy bonds for victory!". All this was organized artificially, to create an atmosphere close in Europe of those days, to make people feel what Nazism is. Canadians did not really understand and feel what is happening now on another continent and didn’t really want to help. After the operation, the number of bonds sold to win rose sharply. Vancouver became interested in the fascist show in Manitoba, but he never organized for his citizens, although there were attempts. The neighboring country was very excited when she heard Nazi appeals on Manitoba Radio.

And the action was crowned with success. The next morning, the Winnipeg people bought bonds of a military loan, the funds from which were used by the army, with 3.200.000 dollars. Winnipeg collected a total of 24 million, mainly thanks to Day If. The expenditure of the entire campaign was 60 million, which is significantly higher than the quota in 45 million dollars. The campaign attracted about $ 2 billion throughout the country, and if Day was considered during the war one of the most successful events to raise funds for the needs of the war.


PS: There was a city legend in the Soviet Union at the time:

Three friends found a caches in the forest, in which there was a German military uniform and weapon. For fun, they dressed in “Germans” and entered the village as such. And in front of the village council building they shout in broken Russian: "Russian pigs, show me where the Jew is, the commissar, the communist ...", and so on. And at the same time the rifles were aimed at the chairman of the collective farm, the shutters juggle (and the village people see all this). The chairman turned green with horror, he knocked on his knees and shouted: “I’ll say everything, we’ll give out everything - just don’t kill ...”

In general, the police arrived, took all the boys 15 day for hooliganism. And to the chairman - 25 years for treason!