Something about the incomplete sovereignty of Germany 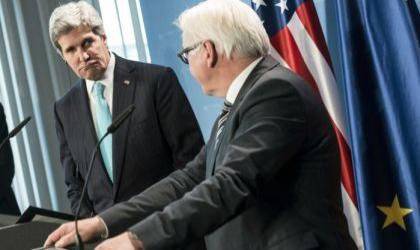 German Foreign Minister F.-V. Steinmeier arrived in Moscow as an old acquaintance. At a joint press conference with his guest, Sergey Lavrov assured that Moscow and Berlin have no problems, the discussion of which would be taboo. This statement emphasizes the confidential nature of the established relations and sounds in unison with the interview of the German minister, which was published on the eve of the visit to the Russian Kommersant. However, if long-standing partners maintain complete mutual understanding, then why does the German press call the visit a “difficult mission” and compare it with “walking on the edge of the abyss”? (1)


In the current government of Germany F.-V. Steinmeier has the richest experience in communicating with Russian partners, comparable only to the experience of A. Merkel. Recall that for the first time, Steinmeier was the Minister of Foreign Affairs in the 2005-2009 period, in the first office of A. Merkel, who, like the current one, consisted of representatives of the CDU / CSU and Social Democrats. It is believed that then, in opposition to the Chancellor, he actively supported the development of bilateral relations with Russia, proposing the concept of “Cooperation for Modernization”. A. Merkel, who proclaimed the establishment of a transatlantic partnership as a priority of her foreign policy, although she did not publicly criticize Steinmeier’s proposals, was skeptical about them. She proceeded from the fact that Russia is not going anywhere, she needs Western technologies in any case, including for the extraction of exported oil and gas, and Russia will be completely unwilling to turn to China, given the demographic vulnerability of Siberia and the Far East.

What has changed since then? While the Social Democrat Steinmeier was in the parliamentary opposition, German diplomacy, led by Guido Westerwelle, did not propose any new ideas in the Russian direction. In the coalition agreement signed during the creation of the current federal government, Russia has been given a lot of space, but this indicates, rather, the absence of a unified strategy for the coalition participants. The ideas entered into the treaty are good in themselves: open dialogue, broad cooperation. However, is there a practical program behind these declarations or at least a general concept? This concept was in G. Schroeder; In the book “Intangible Words”, the presentation of which took place in Berlin 14 in February of this year, it says that the EU and Europe can be a counterweight to the United States or China only with Russia (2).

Today, leading German politicians are distancing themselves from the “culture of restraint” attributed to Westerwelle. Germany can not be a great Switzerland, proclaims the expert of the Social Democratic Party on foreign policy and security policy J. Janning (3). The line on intensifying the foreign policy of the Federal Republic of Germany today is turning into a buildup of the German presence on the African continent and support for the anti-government speeches of the Ukrainian opposition. One wonders to wonder: what next? Where in the world will Germany consider itself responsible, what actions will it take there? The place of Russia in the new coordinates of German foreign policy, apparently, has not yet been determined. And while the Merkel doctrine (the establishment of the transatlantic partnership) remains in force, it is difficult to count on the success of the dialogue between Berlin and Moscow. This is what the first visit to Russia by the Minister of Foreign Affairs of the third cabinet, A. Merkel, showed.

If the German side regards the visit as constructive, so much the worse. At Steinmeier’s talks in Moscow, Berlin’s only offer was to involve the OSCE in Ukraine as a mediator. Moscow did not accept the proposal, given the negative experience of OSCE mediation in resolving the “frozen conflicts” in the post-Soviet space. It seems that Berlin just waited.

Steinmeier’s meeting with her Russian counterpart was fruitless. Its only achievement is an exchange of views. F.-V. Steinmeier, roughly in this vein, spoke out when he said that it was better to meet and discuss problems than to keep silent. At the same time, the German minister responded with silence to S. Lavrov’s criticism of interference in the internal affairs of Ukraine, which was voiced during the joint press conference. What is it - a sign of consent or unwillingness to engage in dialogue? For the beginning, it would be appropriate for the German minister to somehow state his position on the walk along the Maidan accompanied by the Klitschko brothers of his predecessor Guido Westerwelle, who was the first Western politician who demonstrated in this way support for anti-government forces in Ukraine. The current coordinator of the German foreign affairs agency for Russia, the Eastern Partnership and Central Asia, Gernot Erler, considered the Westerwelle share to be wrong (4). Does Mr. Steinmeier share this opinion? Unknown, since he significantly refrained from commenting. By the way, I did not say a word about the recording of the scandalous telephone conversation V. Nuland.

But F.-V. Steinmeier did not hesitate in expressions to express his indignation at how Russia took advantage of the plight of Ukraine. Immediately upon taking office, he read the Moscow notation, calling its course of action “absolutely outrageous”. What was meant was the decisions of the Russian president to allocate Ukraine a loan of 15 billions of dollars and provide a discount in the price of gas. One of the leading German experts on Eastern policy, H.-H. Schröder (from the Science and Politics Foundation close to the government) summed up: “Steinmeier doesn’t pay attention to the fact that he doesn’t say anything positive about Russia” (5). And how to reconcile this style with the thesis “Without Russia, nothing will come out”, which the minister expressed at the conference in Munich and repeated in his article in the weekly Focus? (6)

It seems that the reason for this dualism is that Berlin wants to avoid new complications that it may have through the transatlantic partnership. At the same time, I would not like confrontation with Russia. In general, to arrange everything in such a way that both capital and innocence can be kept.

Any changes in the foreign policy of Berlin jealously track the United States. The phrase “Germany has always been a problem for us” (7), which broke off from the head of the Pentagon under the influence of a minute, says a lot. And the Germans, of course, understand the limitations of their capabilities, if the federal minister admits: "In Germany, after 8 in May 1945, we were never fully sovereign" (8). Apparently, the “incomplete sovereignty” of the Federal Republic of Germany affects its relations with Russia.

The article by American experts from the Stratfor Center (9), which characterize Germany’s policy in Ukraine as cynical and overly assertive, draws attention to the Americans ... It hurts the Americans that Berlin too openly supports "its" Klitschko, and not Yatsenyuk, who sympathizes with Victoria Nuland. And, perhaps, Stratfor “just in case” wants to transfer the arrows to Berlin as the main co-driver of the Ukrainian brawl, at the same time pushing the heads of the Germans and Russians with their foreheads. Indeed, in the reasoning of the head of Stratfor George Friedman, a warning to the German upstarts comes through: you can be alone if you stop listening to us. In Southern Europe, you are hated for the fierce demands of budget savings, the French are looking with hope at the UK, dreaming of a new Entente cordiale, as opposed to the hegemony of the Germans in Europe. A Russian embittered attempt to tear Ukraine.

Apparently, in Berlin, they carefully considered the signal from the USA, and now Yatsenyuk is listed there on a par with the former Berlin favorite Klitschko. In any case, A. Merkel invited both Klitschko and A. Yatsenyuk to Berlin.

And yet, despite the shaft of anti-Russian propaganda in the media, in German society there is a request for normal good-neighborly relations with Russia. It is no coincidence that F.-V. For the first time in the past two years, Steinmeier (!) Turned out to be a politician in Germany, more popular than A. Merkel (10). Contrary to anti-Russian propaganda, independent-minded Germans condemn Western pressure on Ukraine. The Internet is collecting signatures for the relevant petition. “This intervention is another step towards unleashing a third world war ... we need peace and friendship with all countries, especially Russia, against which this intervention is directed!” Say those who signed the petition (11).

Guarding historical parallels with the Balkans are caused by the sound of F.-V. Steinmeier comparison of Ukraine with a powder keg. In Germany, it’s much better than in the United States that they pose the whole danger of a powder keg in the center of Europe, and such an assessment itself could serve as a starting point for updating German-Russian relations.

(1) heute.de
(2) Cit. by: "Vorher Herr Bundeskanzler, nachher Herr Schröder". Handelsblatt, 14.02.2014.
(3) "Deutschland kann keine grosse Schweiz sein" / Berner Zeitung, 07.02.2014.
(4) See: zeitschrift-ip.dgap.org. This interview was published in the journal Internationale Politik prior to the appointment of G. Erler to the post in the Ministry of Foreign Affairs, therefore, it cannot be considered as the official position of the coordinator. Accordingly, there is no reference to the publication on the ministry’s website.
(5) "Ohne Russland geht es nicht" / Handelsblatt, 12.02.2014.
(6) Ohne Russland geht es nicht / Focus, 27.01.2014.
(7) Donald Rumsfeld speaking to foreign journalists at the State Department, January 2003
(8) Finance Minister V. Schäuble, 2011
(9) George Friedman and Marc Lanthemann. Geopolitical Weekly, February 4, 2014.
(10) According to the ARD-Deutschlandtrend survey, 70% of Germans are satisfied with Steinmeier’s work in his post. It turns out that he exceeded the expectations of his fellow citizens, because in December 2013 was approved by 53% of the respondents.
(11) openpetition.de