"Manta" against the cruiser

February 24 2014
15
Sea mines, even the most primitive ones, still remain one of the main threats to warships and ships at sea, especially in shallow coastal areas, narrows and harbors of ports and naval bases. A vivid example of this is the detonation of mines during Operation Storm in the Desert on one day at once two large warships of the US Navy. 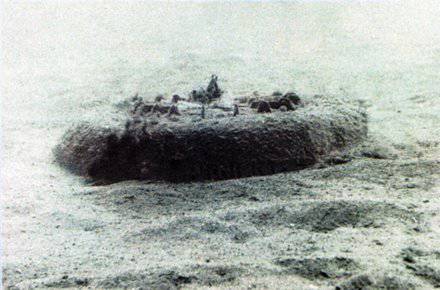 Tripoli helicopter carrier (USS Tripoli, LPH-10), type "Iwo Jima", which during the operation played the role of the flagship ship of mine-transport equipment and on board which at that time was a large group of minesweeper helicopters from 14 the squadron of the minesweeper helicopters was sent to a predetermined area, where its helicopters had to perform an important combat task — to conduct a trawling of the coastal water area, where an amphibious landing force was to be landed.

Suddenly, a huge ship shakes a powerful explosion on the starboard side. What is it? Torpedo? Mine? Yes, the mine - giant Tripoli became a victim of the Iraqi anchor contact mine LUGM-145, which was produced in Iraq, had a mass of 145 kg explosive and was not much different from its older “horned girlfriends” who had sent to the bottom of World War II oceans and seas are not one hundred warships and ships. The explosion struck a hole about the size of 4,9 x 6,1 m in the area below the ship’s waterline, four sailors were injured. Moreover, “Tripoli” was still lucky - soon after the explosion, when the ship stalled the course, two minesweepers accompanying it discovered and dragged three more mines from the helicopter carrier.

The team needed 20 hours to seal the hole and pump out the water that entered the hull, after which the ship was ready to continue solving the combat mission. However, this was not possible - during a mine explosion, fuel tanks with aviation they were damaged by fuel, and the helicopters of the 14th squadron had no choice but to remain in the Tripoli hangar (in total, according to reports, Tripoli lost about a third of all the fuel on board at the time of the mine detonation). Seven days later he headed to Jubail, a port and naval base in Saudi Arabia, where the 14th squadron was relocated to another landing helicopter carrier, the New Orleans (USS New Orleans, LPH-11), type Iwo Jima and then Tripoli went to Bahrain to carry out repairs. Only after 30 days the ship was able to return to combat fleet, and its repair cost the Americans $ 5 million, despite the fact that the cost of one mine of the LUGM-145 type is only about 1,5 thousand dollars. 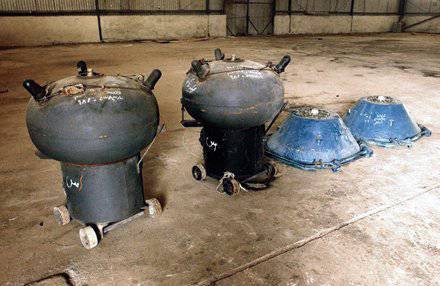 But it was still flowers - four hours after the detonation of Tripoli, a Ticonderoga-type American cruiser URO (USS Princeton, CG-59), about 28 miles from the Kuwaiti island of Failac, exploded on the mine on the left flank of the coalition ship grouping. At this time, the hero was a mine "Manta" of Italian production, which was in service with the Iraqi Navy. Under the cruiser, two mines worked at once - one exploded directly under the left-hand steering device, and the second - in the bow of the ship on the starboard.

After two explosions, the left hand drive was jammed and the right propeller shaft was damaged, and as a result of damage to the chilled water supply pipeline, the section of distribution boards No. 3 was flooded. In addition, the ship’s superstructure got some damage (as they say, the superstructure “led”), and the cruiser hull received local deformations (experts counted three strong dents with a partial hull break). Wounds of varying severity were received by three members of the crew of the cruiser.

However, the personnel managed to quickly restore the combat readiness of the ship - after 15 minutes, the Aegis combat system and the weapons complexes located in the bow of the ship were ready for use in their entirety, which allowed Princeton after he was taken out of the minefield The base minesweeper "Adroyt" (USS Adroit, AM-509 / MSO-509), type "Ekmi", remain in the patrol area for 30 hours, and only then it was replaced by another ship. For the courage and heroism shown in this episode, the ship and its crew received the Combat Action Ribbon, a special award - the bar awarded for direct participation in hostilities. 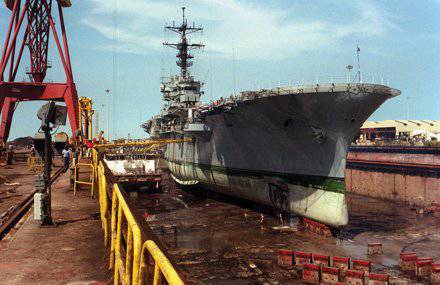 Primary repair the cruiser was held in Bahrain, and then with the help of the shipowner destroyers "Acadia" (USS Acadia, AD-42), the type "Yellowstone", he moved to the port of Jebel Ali, near Dubai (UAE), and then was transferred to dry dock directly in Dubai, where major repairs were carried out. After eight weeks, the cruiser URO "Princeton" under its own power went to the United States, where it carried out the final repair work.

In total, the repair of the ship cost the budget of the US Navy, according to official data of the Research Department (report by the head of the Directive Admiral Nevin? P. Carr at the regional conference on the use of mine and mine weapons MINWARA in May 2011 of the year), almost 24 million dollars (according to other data, the work on returning the ship to service cost the US Navy and 100 million dollars altogether), which is disproportionately more than the cost of two in general, not particularly technologically complex "shallow-water" bottom mines, each of which costs the buyer approximately 15 thousand dollars. In a peculiar way, the Italian developers of sea mines took part in Operation Desert Storm. 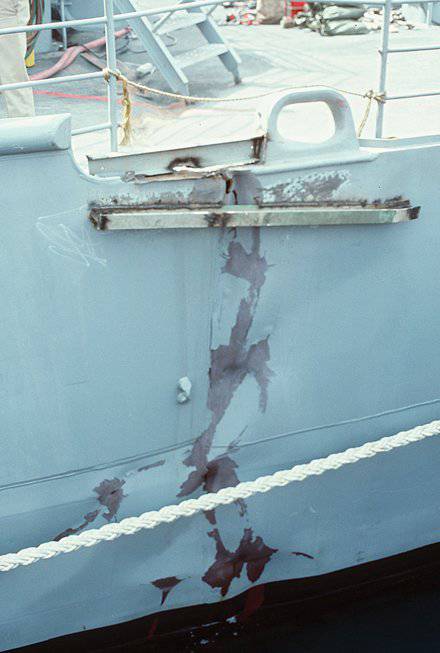 However, the most significant result of the “Iraqi mine threat”, the seriousness of which was confirmed by the undermining of “Tripoli” and “Princeton”, was that the command of the coalition forces refused to conduct a naval landing operation, rightly fearing great casualties. It was only after the war that it turned out that the Iraqis had put in the northern part of the bay, in the landing-dangerous areas around 1300 sea mines of various types.
Deadly "Manta"

Mina MN103 Manta (Manta) was developed and produced by the Italian company SEI SpA, located in the town of Ghedi, equipped with two types of proximity fuses and is classified in the specialized literature either as anti-airborne or as ground. In particular, in the “Jane's Underwater Warfare Systems” (“Underwater Warfare”) reference book, the Manta mine is classified as a “subtle anti-landing mine for shallow depths” (“stealth shallow water anti-invasion mine”). 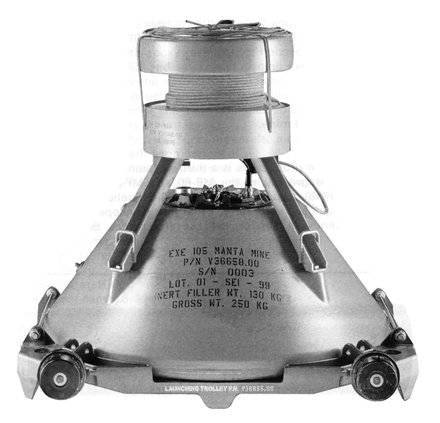 If, as they say, to look at this issue extensively, then we can conclude that both of these options are correct, since the Manta mine is installed at the bottom at depths from 2,5 to 100 meters, but the most priority scenario for its combat use is to mine shallow water in the system of anti-airborne obstacles, as well as in narrow places, straits, in roadsteads, in harbors and ports. According to Russian terminology, “Manta” is a non-contact ground mine.

The main targets for Manta are amphibious ships and boats launched during sea amphibious operations in shallow water, as well as combat surface ships and ships of small and medium displacement, various boats and submarines operating in shallow areas. However, as was shown at the beginning of the material, the “Manta” mine is a very formidable and dangerous enemy for even larger-displacement warships - up to URO cruisers.

The manta mine kit includes:

- fiberglass hull, having the shape of a truncated cone and in the lower part filled with ballast, and in the upper part - having free volumes, filled through the holes with water after the mine is placed on the ground;

- explosive charge (located at the bottom of the mine);

- safety devices for the safe transportation of the mine, its preparation and staging (the detonator is isolated from the explosive charge before the dive to the specified depth;

- devices of multiplicity and urgency;

- devices to ensure the remote control of the mine by wire (from the coastal post, etc.);

- elements of the electrical circuit. 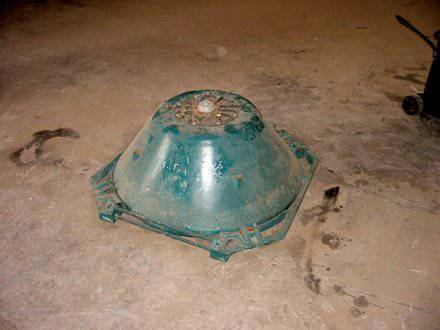 The design features of the Manta mine (low silhouette, non-magnetic fiberglass hull, etc.) provide it with a high degree of secrecy even when the enemy uses modern systems such as anti-mine search devices with side sonar stations during trawling, not to mention the use of traditional sonar systems. mine detection stations for mine-sweeping ships, trawls of various types or optical-electronic detection devices (TV cameras). It is possible to assess the degree of danger posed by the Manta mine for warships and auxiliary ships of the enemy, according to the photo, which shows such a mine just a week after its installation on the ground. In addition, the design of the mine hull and its mass-dimensional characteristics, which were successfully selected by the developer, ensure its secure fixing on the ground, including in coastal and torrential zones, characterized by strong tidal currents, as well as in the waters of rivers and canals.

The laying of Manta mines can be carried out by warships and boats of all classes and types, as well as by airplanes and helicopters, without the need for a substantial amount of work to adapt them for this purpose. Target detection is carried out by the on-duty channel of an explosive device of a mine that activates an acoustic sensor, after which the combat channel of a mine is put into operation. In the domestic literature it is indicated that magnetic and hydrodynamic sensors are included in the battle channel of the Manta mine, but there is no mention of a hydrodynamic sensor in foreign specialized literature.

It should also be mentioned about the possibility of delaying the time of bringing the Manta mine to a combat state, up to 63 days, which is ensured by an urgency device having a one-day step. In addition, it is possible to control the mine explosions by wire from the coastal post, which significantly increases the effectiveness of combat use of mines of this type as part of the anti-amphibious or anti-submarine defense system of the coast, harbors, ports, naval bases and bases. 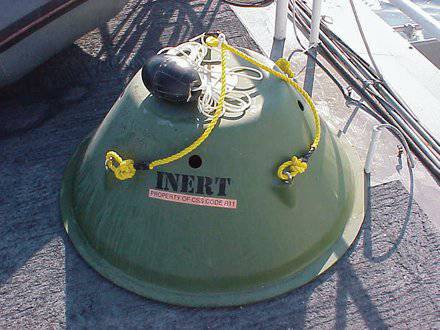 The company develops three versions of the Manta mines: combat, intended for use in its main purpose; practical, used in the process of training miners, during exercises, testing of various mine action tools and collecting various statistical data, as well as training mines or mock-ups, which are also used to train specialists, but only in training classes and classes on the coast (ship) .

The combat modification of the mine has the following tactical and technical characteristics: maximum diameter - 980 mm; height - 440 mm; weight - 220 kg; explosive mass - kg 130; type of explosive - trinitrotoluene (TNT), HBX-3 (phlegmatized trotyl-hexogen-aluminum) or solid thermobaric explosives of the PBXN-111 type (molding composition on a polymeric binder); setting depth - 2,5 – 100 m; the radius of the danger zone of mines (affected areas) - 20 – 30 m; admissible water temperature - from –2,5 ° C to + 35 ° C; the term of combat service at the position (on the ground in the firing position) - not less than one year; Storage time is no less than 20 years.

Currently, the mine "Manta" is in service with the Italian Navy, as well as the naval forces of several countries of the world. It is hardly possible to establish exactly which countries in particular, since the presence in the arsenal of such means of armed struggle of the owner country is usually not sought to advertise. However, one such country, the owner of Manta-type mines, manifested itself, as mentioned above, during the first Gulf War of 1990 – 91. In total, according to the data of the mentioned reference book “Jaynes” for 2010 – 11 years, more than 5000 mines of the type “Manta” have been released today.