Russia - the United States. Who are the judges? 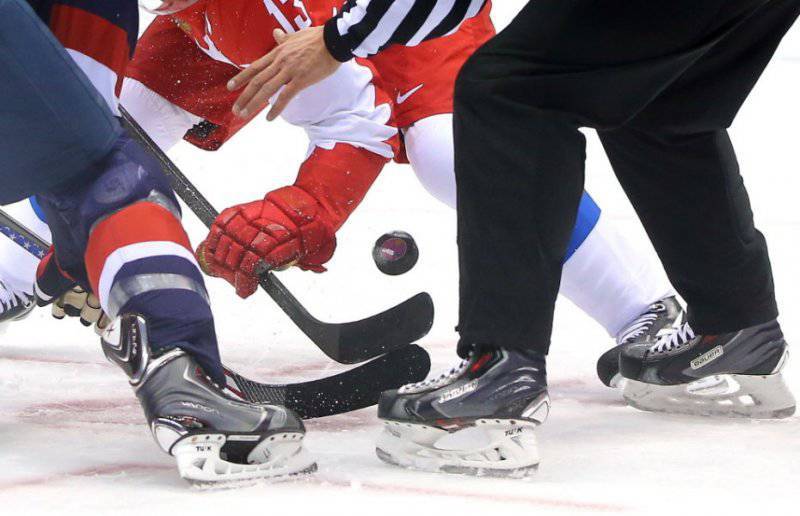 This match, which, in principle, did not have a big tournament value, will definitely fit into all textbooks stories Olympic hockey. The match in Sochi on the crowded ice arena between the eternal rivals Russia and the United States of America is judged by the chief arbiter from ... the United States of America! The ingenious decision of the people who were engaged in the organizational preparation of this match, the ingenious decision of the IIHF, isn't it ...

The reason, as we were told, is that the hockey functionaries do not take into account the nationality of the arbitrators ... At first, the arbitrator did not really focus the attention of thousands of viewers and millions (if not billions) of viewers on his citizenship. But as the unforgettable Stanislavsky used to say: if at the beginning of the play a gun hangs on the wall, then (by the end of the play) it will shoot. And the American referee really "shot." He is the one who cannot choose another word, brazenly canceled a goal capture by Russian hockey player Fyodor Tyutin with the 2: 2 score. Canceled after watching the replay, in which even a person with serious myopia would see an obvious goal. The puck flew into the top corner of the American goalkeeper Kwick's gate and after a moment jumped out onto the court. Replays from different cameras of the American referee did not impress - he did not count a goal. The judge explained his decision by saying that the American gates were "slightly" shifted ... "A little" - this is how much - one question, and who exactly moved them (if ever moved) just before Tyutin's throw - is another question.

And now let's imagine for a second what would have happened if a Russian referee served the USA-Russia match in the USA, and helping his compatriots to win in such a clumsy way that the US judge used in Sochi. Yes, this simply could not have been by definition ... It turns out that, excuse me, about our own feet, they wiped their feet on our land - in the eyes, by the way, of the president and prime minister of the country. And now what? - we have to shake off the dirt and wipe the snot, pretending that nothing terrible has happened? .. Are we going to merge our own national team, which was laid out before the eyes of the fans until the last second? ..

We discussed the tense and dramatic game of hockey teams of Russia and the United States with renowned hockey player Pavel Bure.

Dmitry Borisov: Pavel, hello. Thank you for coming to us right after the match. You were there, everyone saw with your own eyes. The main question that everyone is now discussing: what happened to the third uncounted goal of our team?

Pavel Bure: I watched very carefully, it seemed to me that the puck flew into the goal and a red signal came on that there was a goal.

Dmitry Borisov: Let's see together. We have the opportunity to watch these moments, here, right here in the studio. That's how it looked in the television broadcast in replay from different points.

Pavel Bure: I just saw on TV that the gate was not in place. Unfortunately, according to the rules this is not a goal.
Dmitry Borisov: Why didn't you notice this earlier?

Pavel Bure: I do not know. There are still 4 referees who should have seen it. We all rejoiced, celebrated a goal, but this nuance, of course, was not visible from the podium.

Dmitry Borisov: But Vyacheslav Vainov says that the goalkeeper could have been intentionally moved in advance, which in general he is famous for because of his technique.

Pavel Bure: There are certain tricks for goalkeepers. Unfortunately, the puck was not counted, but it flew into the goal, so you can see it very well here. That is, everyone saw it.

Dmitry Borisov: Judging by the personnel, would you consider this goal in place of the judges or not?

Pavel Bure: You know, I support Russia, I would personally count it. But there is a rule that if the gate is shifted, the goal is not counted.
Dmitry Borisov: How do you deal with the situation, that the game was actually judged by the NHL judges - an American and a Swede?

Pavel Bure: As far as I know, they seem to represent the NHL. Unfortunately, so far we have no judges in the NHL, and it is hard for me to say by what criteria those judges who are here were selected.

Dmitry Borisov: If you do not take into account this goal, most of the time ended in a draw 2: 2, was it a game of equal in your opinion?

Pavel Bure: At the Olympics, about 6-8 teams have equal chances, and once again today all showed two teams that ours played well, and the Americans also played fairly well. I was just pleased with Datsuk: he had an injury and he scored two goals today, well done.

Dmitry Borisov: And then the third, already in the shootout, but they said that he did not recover from the injury.

Pavel Bure: There was a lot of talk, and I know how hard it is in itself, when you don’t perform for a long time, only you train how hard it is to get into the game. But Pavel played great today and scored two important goals.

Dmitry Borisov: After the games you talked with the guys, what is their attitude in the team?

Pavel Bure: The fighting spirit, the guys believe in themselves, today they played 2: 2, and then bullets, like a penalty, this is a lottery.

Dmitry Borisov: What would you advise them to pay attention to?

Pavel Bure: I think it is more careful to play defense, because we had two exits one on one against us. Our attack is probably the best attack in the world.

Dmitry Borisov: Well, we will root for ours in the next game. Thank you very much!

Today's defeat in shootouts, of course, does not mean that everything is lost. Russian ice hockey team with four points in second place in Group A of the Olympic tournament. Five points for Americans, three for Slovenia. The fourth is the team of Slovakia, with which we will play tomorrow, at the same time as the USA-Slovenia meeting.

Ctrl Enter
Noticed oshЫbku Highlight text and press. Ctrl + Enter
We are
What a strange tantrum around the Olympic torch relay?
Military Reviewin Yandex News
Military Reviewin Google News
250 comments
Information
Dear reader, to leave comments on the publication, you must sign in.