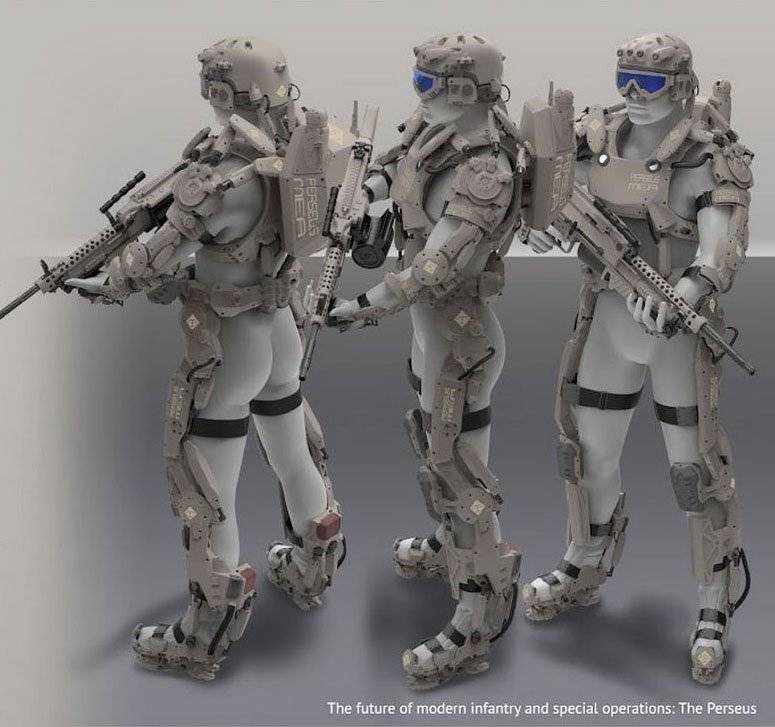 Since the Middle Ages

Since the early Middle Ages, military development has depended entirely on the development of technology: warships, cavalry, bows and arrows, gunpowder, airplanes, etc. An incorrect prioritization is expected: to reach the stars and forget about shoes on Earth.

What is the significance of a navy without sailors and troops? How long will a jet fighter be useful without the personnel maintaining and protecting the airbase? How effective is a high-tech rifle without a pair of hands that use it in combat?

Even if, within the framework of defense R & D, the infantryman is not forgotten, the burden of progress literally falls on the backs of the foot soldiers, because they have to transfer equipment with a mass of half their own body weight. It is not surprising that only “inhumanly” trained special forces can cope with such a load in combat conditions. But surprising are the small costs of protecting ordinary infantrymen and giving them strength, on their combat training.

In the face of such an imbalance, Rhadamanthys Systems aims to develop not only assistive technologies for the individual soldier, but also the beginning of a comprehensive reassessment of the combat value of a modern infantryman. 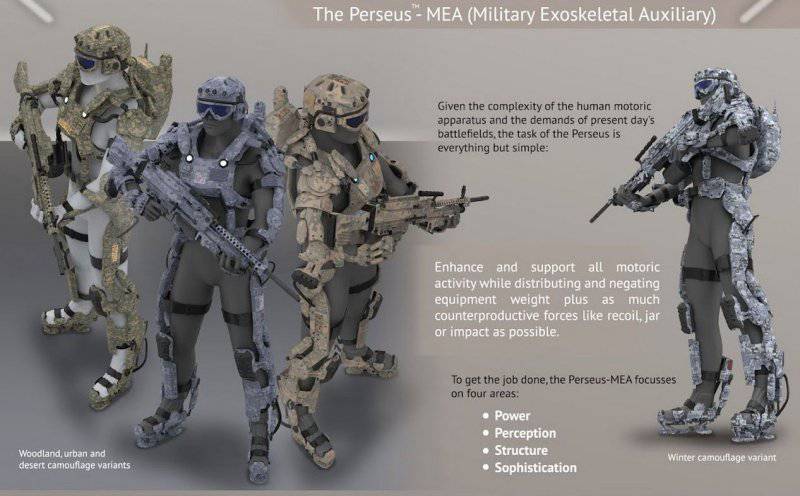 Based on the complexity of the human locomotor apparatus and the requirements of the modern field, the Perseus task is not at all simple: to improve and maintain all the motor activity, simultaneously distributing and reducing the weight of equipment, as well as opposing such forces as, for example, recoil, jolts and impacts.

To do its job, the Perseus-MEA system focuses on four areas: strength, perception, design, and high complexity. 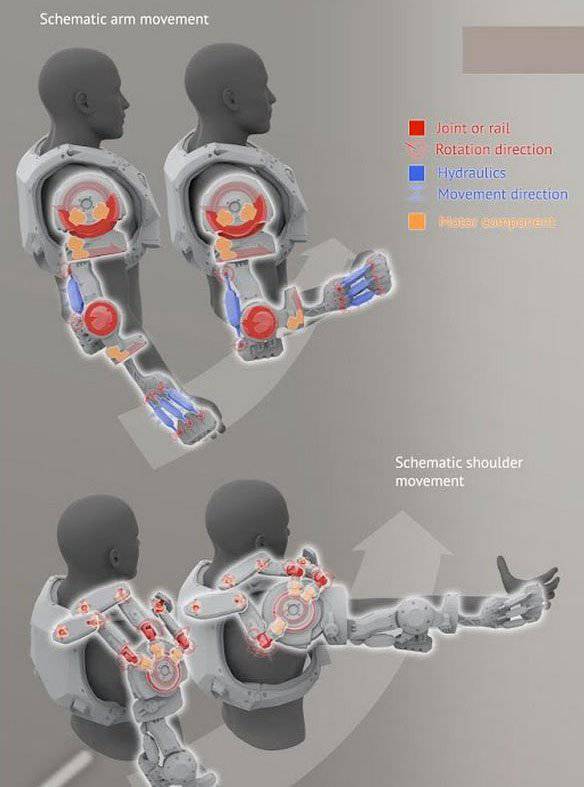 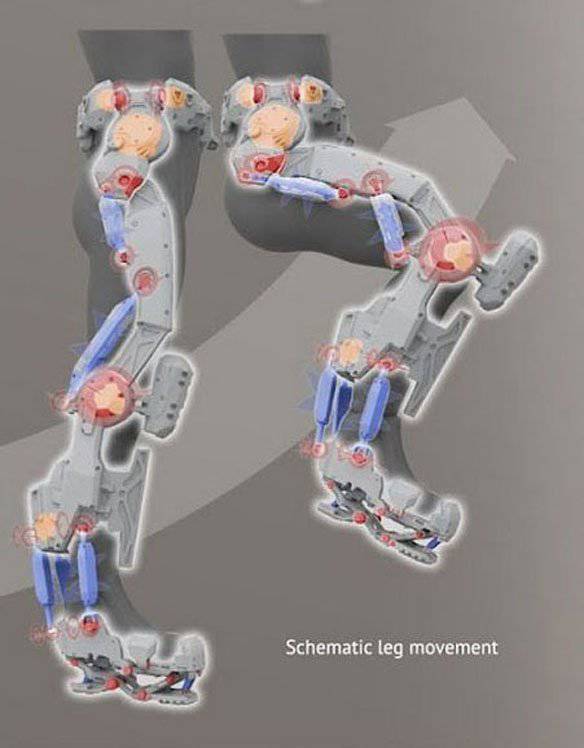 In addition to its own 39,6 kg mass, the chassis design with a variety of attachment points makes it possible to cope with a load of 200 pounds (about 90 kg). The 39,6 kg mass includes two blocks of lithium-molybdenum batteries, which ensure the duration of operation at peak loads from 150 to 200 hours.

The functions of the exoskeleton provide increased strength of movement, depending on the specific articulation, up to 400%. Preliminary tests with trained athletes showed an increase in walking / running speed up to 100% and an increase in strength when jumping up to 150%.

Total cardiovascular endurance increased by 50% due to the support of the movements provided by the Perseus exoskeleton. But at the same time, too much increase in effort should be limited, for example, to prevent injuries due to reflexive movements.

At first, none of the Perseus operators will be able to jump over cars, but, nevertheless, they will be able to lift and carry loads that exceed their own mass many times over.

Greater freedom of use of additional kinetic functions can be gained in the course of long-term training, which Rhadamanthys Systems is developing together with each client.

With almost no training, you can use the depreciation and impact reduction functions, similar to the full depreciation functions of the foot.
This will allow even a beginner to safely jump from a height of 3-5 meters onto concrete surfaces without the slightest loss of balance. 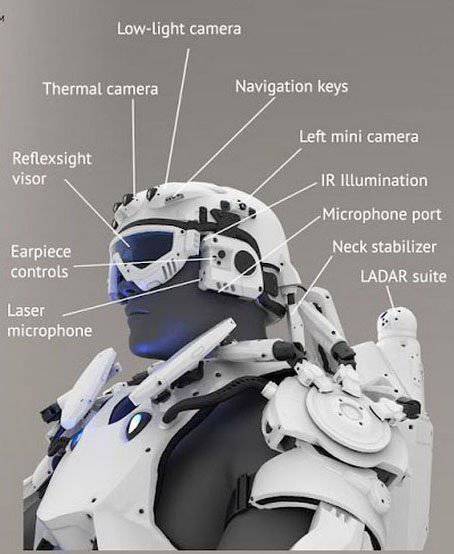 Information about the outside world is the most important success factor in battle. Therefore, the Perseus-MEA exoskeleton has a complete set of stereoscopic thermal imaging sensors and image enhancement sensors built into the helmet and equipped with protective curtains for working in daylight conditions. This saves the user from wearing the current heavy and bulky night vision equipment.
Additionally, four microcameras provide an optional circular field of view of 360 degrees.

The set of optical sensors is completed by a dorsal module, equipped with a rotating full-scale ladar (laser radar) for determining the range and 3D-mapping, as well as target designation in case of participation in mixed operations with combat units.
All data can be projected on the goggles without the treacherous glare of the display. Standard connectors allow you to send / receive data to / from other devices.

Based on the requirements of low visibility, the Perseus system reduces the volume of all movement sounds and reduces heat generation from the chassis, and also hides the heat generated by the operator’s body.

As for sound perception, here the headphones offer the possibility of a standard connection to the microphone of the choice of the operator; The patented Guardian Angel ™ system is responsible for playing sounds.

It allows you to play external sounds with excellent quality in each isolated earpiece, but at the same time provides dynamic jamming in case of explosions, shooting, etc.

If the operator needs an improved perception of sound, an earpiece with a narrowly focused laser microphone, having a valid range of approximately 15 meters, is switched on. This is useful, for example, when acting in an urban setting. Considering the scenarios of cybernetic hostilities in the near future, the onboard computer architecture prohibits external access to all critical functions.

If illumination is needed, then there are two powerful LED lights on the torso module.

The Perseus chassis consists of an aluminum-titanium frame with special reinforcement at the joints. The exterior parts are made of carbon fiber with Kevlar layers, which is an excellent protection for the internal electronic and hydraulic elements.

The frame provides reliable ballistic protection against non-armored bullets of caliber up to 9 mm in average 73% of cases of bullets and fragments falling into the body, despite the fact that the original model did not provide special protection.

Many systems boast of two-digit degrees of freedom, ignoring the true complexity of the movements of the human musculoskeletal system, which, in theory, corresponds to the standard frame with mechanical joints. The Perseus system is completely free from this drawback, since it uses the Tri-Point system patented by Rhadamanthys in several versions. Articulations in the wrists and ankles are provided with three offset telescopic pistons to obtain full freedom of movement in these joints.

But the “crown” element of the motorized frame is the shoulder joint. Three multilink levers work between the torso and the sturdy ring bar and provide free movement, while at the same time serving as supporting and protective elements.

All external telescopic pistons of the system are covered with a protective Kevlar-carbon material to minimize the loss of functionality even in the case of a direct hit by a bullet or a fragment. On the other hand, the system functions as a stabilizer in case of injury, while reliably blocking the articulation. The Perseus exoskeleton also has a helmet stabilizer kit that prevents neck injury and stabilizes it in case of injury.

All outer tubes and cables are covered with the Duratube system, consisting of reinforced tubes of interlaced Kevlar and steel fibers, which are as strong as the main frame.

The main functions of the Perseus exoskeleton are controlled by the latest Neurosimulatron fuzzy logic processors, which are calibrated by a simple standard movement of a particular person. A set of neuroinductive sensors determines the muscles involved and includes the corresponding movement of the frame itself.

In order to reduce recoil forces, the system includes a reversal process. It determines which movement is not initiated by the musculature at the moment and even which movement interferes with muscular efforts and actively counteracts these movements. Acceleration sensors and microgyros help this process, and also contribute to the balancing of the additional load.

The Perseus exoskeleton has a built-in radio and satellite communication kit with encryption to provide communication with its and neighboring units. Also this kit is supplemented with GPS, emergency pulse transmitter and signaling beacon. Additionally, a first-aid kit is included in the back module, as well as signal flares to indicate the place of evacuation. 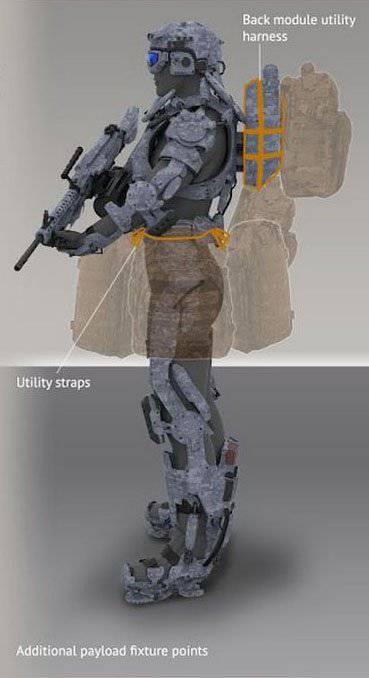 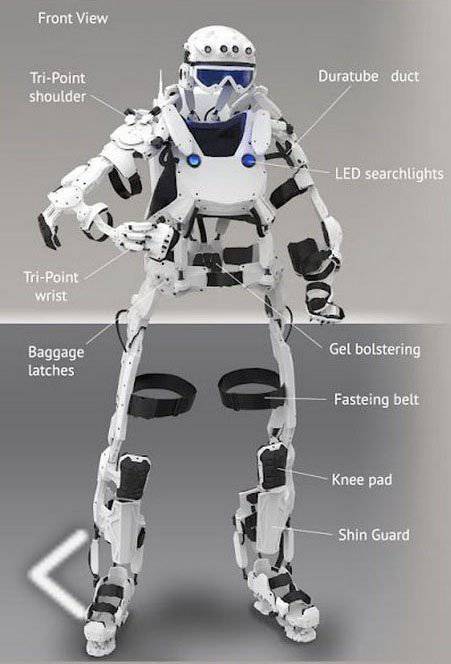 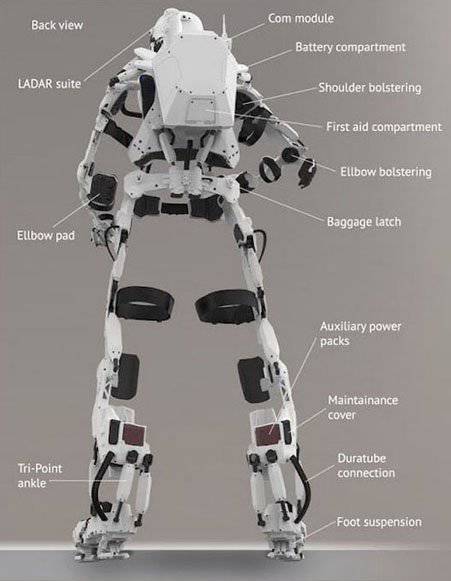 In the spring of 2014, the future of the Perseus system promises to be exciting. Further improvement of the MEA variant will be carried out. The ACC (Active Combat Chassis option) is already at the prototype stage; it includes enhanced armor protection and support for various weapons. The creation of another version of Perseus-VAP (Versatile Auxiliary Purpose - a universal auxiliary tool) involves civilian investors, since it is created for construction sites and loading and unloading operations.

Based on materials from http://soldiersystems.net