Folk film about the war. Finally!

February 17 2014
287
Folk movies. Is it possible today to make a truly popular film in conditions, God forgive me, a market that has captured the minds of many of our fellow citizens when the money supply is ahead of such concepts as human form, high morality, spirituality, feat, sacrifice? The author’s team led by director, screenwriter and producer Andrei Shalopa decided to ask just such a question - a man who had decided to make a movie that could be supported by the audience themselves, a movie in which everyone’s financial assistance (including financial support) can contribute viewer.


We are talking about a unique domestic project - the feature film "28 Panfilov", the idea of ​​creating which was born in the bowels of the St. Petersburg studio "LPS". The uniqueness of the project lies in the fact that it is withdrawn precisely with national funds - not for the millions and billions that are otherwise allocated from the state and other budgets, but with the money of ordinary Russians. The goal of the author’s group is to convey to the modern viewer what was happening on the approaches to Moscow back in 1941, how the fighters in the Moscow region’s snows in the Volokolamsk direction opposed tank the armies of the Nazis (2nd and 11th tank divisions of the enemy), that is a real feat in the name of the Fatherland. 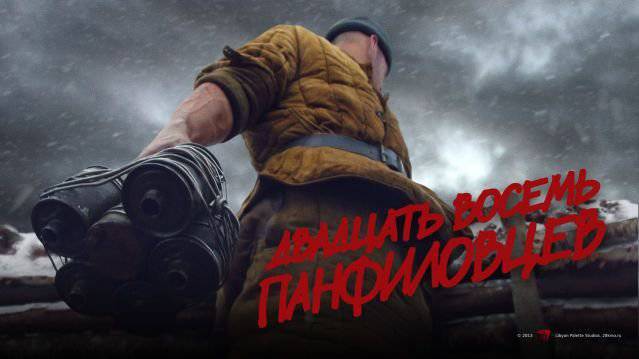 Answering numerous questions from the audience, the authors declare that they are not going to exaggerate the perestroika and post-perestroika thesis that история About 28 Panfilov fighters - defenders of Moscow - this is a myth. The authors are not going to make a film “based on” hyperliberal tales about how “one rifle is for three,” how “drunken fighters in the trenches go to the toilet, using newspapers with a portrait of Stalin,” how “bloodsuckers, political instructors scribble denunciations,” as juvenile delinquents redeem the blame with blood. " These “masterpieces” of liberal literature and “documentary art” in the “28 Panfilov’s” by Andrei Shalopa that have been born after the collapse of the USSR will not be. And thank God!

The authors' team makes a film that is dedicated to the heroic defense of Moscow - what should educate, what can serve as a grain of social consolidation (consolidation of, let's say, healthy forces, and not those who take any patriotic undertaking extremely painfully). In this case, it is not so important whether 16 or 1941 fighters fought against the Hitlerite tank divisions of 28 in November. The important thing is how, in moments of the highest danger for one’s Motherland, a person can go for deeds worthy of not only respect, but admiration as well.

Someone will say: pathos ... But what's wrong with healthy pathos? In the end, it was on heroic pathos in our country that whole generations were brought up. If for someone the cinematic narration about the heroism of the Soviet soldier looks something reprehensible, if he is used to trusting exclusively those materials in which the “triumph of the bloody gebni” is a personal matter of such a person. As the saying goes: go and revisit the "Bastards" ...

The film is therefore shot on popular funds, so that the overly stinging fellow citizens would have no reason to rebuke cinematography officials in the “wrong direction of means”. It should immediately be noted here that cinematography officials have nothing to do with the 28 Panfilov film, and perhaps thank God ... This fact alone puts the film on a completely new platform - a platform of real popular choice. This option has become forced for the film (about the reasons just below), but it is he who gives the opportunity to make a movie, which is “not from above”, but that — from those who will be its main audience — the usual average Russian — a person who is tired of pouring tons, excuse me, crap on domestic history and culture by various possessed authors from both the cinema and the literary community.

The film, according to Andrei Shalopa, is shot not only on the basis of numerous literary works devoted to the events of the defense of Moscow (one of such works is “Volokolamsk Highway” by A. Beck), but also on testimonies of veterans, on archival documents.

One of the questions that Andrei Shalopa, in his own words, is tired of answering: will the heroic line of defense of the capital from the enemy be shown in the picture, or will the authors focus on love and other romantic lines ... The author of the film gives a definite answer: there will be no love lines in the film, for a film about the heroism of a soldier in the name of the Fatherland!

And, frankly, the demonstration of the next love line in the film, which is directly connected with the Great Patriotic War, would be a brute force for all known reasons. It is unlikely that the people will support the author if he had originally decided to look for romance in the soldiers' trenches on the Volokolamsk direction at the time when dozens of tanks rush to Moscow? ..

The script of the film was written 5 years ago. Initially, the authors of the film (in 2009 year) decided to apply for financial assistance to implement the project to the state structures - the Foundation for Supporting Patriotic Cinema under the President and even personally to the President of the Russian Federation, which at that time was Dmitry Medvedev . However, as it turned out, both the foundation and the president were indifferent to the shooting of the film according to the script of Andrei Shalopy. Did you read the script? - this is a separate question. Perhaps they were sent “on the back burner”, and not reading at all, as often happens if the idea comes “from below” ... The filmmakers themselves explain the reaction of state authorities in the following way: it is possible that they thought the film would have to spend about the same amount how much recently masters like Nikita Mikhalkov have been spending on filming, for example ...

However, the amount of funds for which the film “28 Panfilov” can be made is not comparable with the money spent on shooting, for example, “2 Burnt by the Sun”. The picture of Nikita Mikhalkov "ate" 40 million dollars. To implement the project Andrei Shalopy requires less than 2 million dollars, namely 60 million rubles.
After the creative team realized that state support was not to wait, the idea was born to make a film using folk remedies. Perhaps the refusal of state authorities to finance - only to the benefit of the film ...

It was offered to all those who are interested in the artistic embodiment of one of the most tragic and heroic stages of the defense of Moscow, to take part both in the work on the film and in the financing of this work. A huge number of people responded. Some offered to work as actors on extra gratuitous basis, others - to help them with the historical facts and evidence of the events of November 1941, others - just transferred the money. Your humble servant (the author of the material) also listed - let him, of course, immodest about himself, but, as they say, for the sake of such a thing ...

By this minute, about 10,1 million rubles had accumulated - a little more than the 6 of the total amount. We have no right to call on all readers to support this particular project, but for those of you who still decided to express such support, we present the page "28 Panfilov" http://28panfilovcev.com/ - through it, you can make your own feasible (national) contribution to the creation of national cinema about the Great Patriotic War, as well as contact the film team of authors.

Here you will immediately have to say this: our dear readers, you do not need to suspect the Military Review that our publication has some kind of personal material benefit from the project of Andrei Shaliopa. Perhaps the authors of the film “28 Panfilov” did not even know about the existence of our electronic resource. We decided to publish this material for the reason that the creation of a patriotic film about the war is indeed overdue, and informational assistance to such a popular project will definitely not hurt. Let's hope that the film in the foreseeable future will be released on screens and will bring together a decent audience. As we hope, the authors of the film will not lose face.

Ctrl Enter
Noticed oshЫbku Highlight text and press. Ctrl + Enter
We are
"Twenty-eight Panfilov": a folk film against the falsification of historyResults of the week. “Lord, why didn't England please him ?!”
Military Reviewin Yandex News
Military Reviewin Google News
287 comments
Information
Dear reader, to leave comments on the publication, you must sign in.