February 17 2014
33
Lawmakers also decided to contribute to the reform of the Russian army. One of them is a representative of the Communist Party faction in the State Duma, Vladimir Komoyedov, head of the Duma defense committee, former commander of the Black Sea Fleet of the Russian Federation. Komoyedov proposed the creation of a “Military Code” in Russia, into which it would be necessary to reduce all the current federal laws. According to the deputy, it will allow better to regulate security issues. At the suggestion of Vladimir Komoyedov, the “Military Code” should include, among other things, such Federal Laws as “On conscription and military service”, “On martial law”, “On state of emergency”, “On defense”, “On status of military men”, "On mobilization training and mobilization." This code should be a kind of reference book for commanders of various types and types of troops. 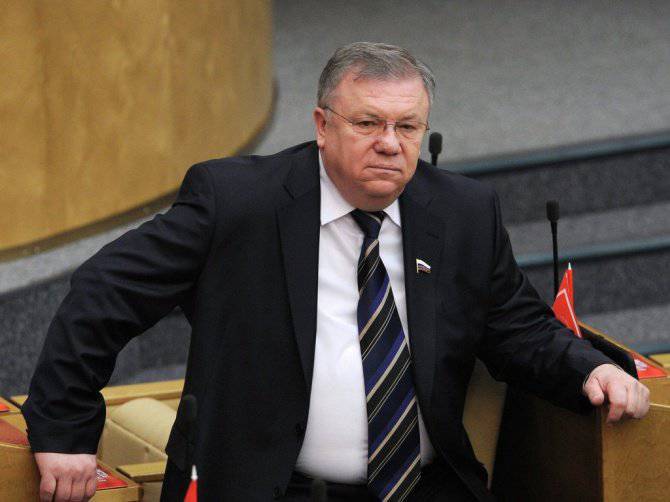 Representatives of some other Duma factions supported the initiative of Vladimir Komoyedov. One of them was the deputy chairman of the defense committee, Franz Klintsevich. He expressed his views on this matter in an interview with Vzglyad. Klintsevich noted that the benefits of the idea cannot be ruled out, but he would not call his new documents and laws the “Military Code”, since for its implementation it is not at all necessary to follow the path of implementing the new draft law.

Franz Klintsevich:
... just be a book that commanders will have. And in it all their rights, duties will be painted. This will facilitate the work of commanders and superiors. The creation of such a code is a purely technical work that does not require the participation of the State Duma. I can also do this work by instructing assistants to summarize all the bills that exist, put them in one brochure, and then ask the sponsors to release it as charity and distribute it to the commanders of the units.

It cannot be ruled out that the fragmentation of various federal laws, their presence in different print publications, creates certain problems for commanders. To move from consideration of one law to consideration of another, you need to get up from the table, raise your hand to the book (documentation) shelf and take out another edition from there ... And if you take out something else, and the commander will understand it only when he sits down again at his table and open the book (folder) - then you need to get up again (and in fact the build of some commanders do not always allow it to be done quickly and painlessly) and again to the regiments. Of course, the problem for ensuring the security of Russia at this stage is serious ... And then the deputies, of course, must take all the trouble to help the commanders to collect the documentation base and, most importantly, without fail, “ask the sponsors” to publish and distribute to the high ranks "(Or whatever it will be called there) ...

Only deputies who propose to put together the Federal Law and other documents relating to the functioning of the Russian army in the Code, as well as deputies who support this initiative in one way or another, for some reason do not take into account one fact: everyone respecting himself, his subordinates and Russian legislation servicemen with large (and not only large) stars on their shoulder straps have already guessed to reduce all documents of great importance for their work (and, accordingly, to ensure the security of the country), federal laws s articles of the Constitution together. We guessed that it is remarkable, without any initiatives “from above” - they just took brochures, books, newspapers, etc., let the necessary materials through copy machines and put everything in a folder-folder - that’s all the work ... information from the Federal Law - took the folder, flipped through, found what was needed - studied. I am personally acquainted with several such officers. One of them, responding to a request to describe the initiative of the deputies, expressed, to put it mildly, bewilderment:

I did not think that a photocopy of a couple of dozen documents is a matter worth discussing in the State Duma and wasting time on it. If someone from the commanding staff at different levels did not have time to collect all the necessary documents for work, then this can be done in a maximum of a couple of hours. Technique allows. Publications of laws on the Internet are. In the end, it is easier to simply “pull down” the list according to which each person in the corresponding command post can compile a folder. All the most important things for everyday work are in the statutes.

In fact, it is somewhat strange that the deputy initiative comes from a person who himself was on a high military for a long time (naval) positions. It turns out that either Komoyedov’s subordination was entirely lazy and inert commanders who needed to bring everything on a silver platter (in good binding), or Vladimir Petrovich simply goes too far, really, devoting legislative time, to put it mildly, not the most relevant at the moment things.

Of course, the creation of the “Military Code” will not hurt anyone, but ... It is a matter of time, in financing the preparation, publication, distribution. If you also attract philanthropists here, then in general a strange picture may turn out. Patrons of ours with a high degree of probability will require to write on the brochure that it was they who financed everything. And it will turn out a certain “Military Code with the financial support of the general director of OOO Main Patron and Co.”

In the end, after the possible adoption of the “Military Code”, doctors, teachers, musicians, builders may be offended and say: why do we not have our own code? Deputy groups will gather again and they will start discussing how to put together documents on the work of teachers and medical personnel. And it does not matter that many (like those mentioned officers) themselves have long guessed systematized documentation important for their work.

Ctrl Enter
Noticed oshЫbku Highlight text and press. Ctrl + Enter
We are
Money for the army is not enoughMilitary doctrine of the Russian Federation
Military Reviewin Yandex News
Military Reviewin Google News
33 comments
Information
Dear reader, to leave comments on the publication, you must sign in.