February 15 2014
0
Experts believe that production will simultaneously decline - from 42 thousand 576 units in 2014 to 38 thousand 177 in 2018. The relationship between the growth in sales while reducing the number of missiles launched is explained by the high cost of a number of missile systems.


The leading positions in the market during this period will be distributed as follows. First place in terms of the number of missiles produced will be taken by China Industrial Industries Corporation NORINCO (China North Industries Co.), which will launch 29 thousands of 992 missiles (15% of the total market volume). In second place will be the American "Raytheon" (Raytheon) - 23 thousands of 744 units (12%). The third position will be China National Precision Machinery Export-Import Corporation CPMIEC (China National Precision Machinery Import and Export), which will manufacture 18 thousands of 479 missiles (9%). This is followed by the European company MBDA (11 thousand 232, 6%) and the Tula Instrument Engineering Design Bureau (KBP) of the High-Precision Complexes holding (10 413, 5%). All other manufacturers of SD will have 108 thousand 784 products or 54 percent of global volume. 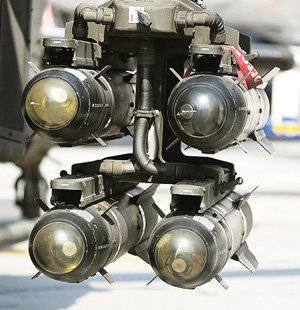 In value terms, at prices of the 2014 financial year, the places on the market for guided missiles in 2014–2018 will be distributed as follows. The leader will be the American Raytheon - $ 10,1 billion, 15 percent. "Lockheed Martin" (Lockheed Martin) will occupy the second line of the world ranking with 5,8 billion and 9 percent. China Aerospace Science & Technology Corp. (China Aerospace Science & Technology Corp.) will be in third place with 5,3 billion and 8 percent. This is followed by the Chinese National Export-Import Corporation of Precision Engineering CPMIEC (4,6 billion, 7%) and the Moscow Institute of Heat Engineering (4,4 billion, 7%). All other manufacturers of guided missile weapons will have 35,2 billion dollars of total sales over a five year period or 53 percent of the market.

If we evaluate the segment of anti-tank guided missiles (ATGMs), it will be in a transitional state characterized by a reduction in the production of obsolete types and their replacement with new models of anti-tank guided weapons. The United States, for example, does not expect the start of a full-fledged replacement until fiscal year 2015 aviation ATGM AGM-114 "Hellfire" (Hellfire) of the company "Lockheed Martin" on the combined-arms aircraft missile JAGM (Joint Air-to-Ground Missile).

The total cost of a five-year market ATGM - 5,1 billion dollars. In total, 109 thousand 204 rockets will be produced during this period, but the annual production will start to decline from 24 thousand 204 units in 2014-m to 19 thousand 446 in 2018-m. This segment is dominated by American manufacturers - Lockheed Martin and Raytheon, whose share in total will be 30 percent of total sales (1,5 billion dollars). The positions of European companies - manufacturers of anti-tank systems will deteriorate, but after offering new missiles to the market they will be able to recover.

Raytheon still produces AGM-65 Mayvrick (Maverick) and BGM-71 Tou (TOW) missiles, but shifts the emphasis in its nomenclature to the small size Griffin AGM-X, used by US special forces , including to protect surface ships from attacks of speedboats and boats. At the same time, the European MBDA focuses on the American market by offering its Brimstone dual-mode ATGM for armament of Predator unmanned aerial vehicles (UAVs), as well as expanding the capabilities of the Viper Strike GBU-176 ).

The total cost of the five-year anti-ship missile (RPC) market is 5,26 billion dollars, which is five percent higher than last year’s forecast. Total produce 6500 products. The leaders of this market segment will be Russia and China, whose share in this period will be a total of 51 percent of the total production - 3 thousands of 332 CRPs. At the same time, the volume of PCR exports of these two countries will remain at a relatively low level, since the missiles of Western manufacturers still dominate the export market. The leader in the export of CRP will be the company MBDA, which will sell over 800 units worth about 450 million dollars. Outside Europe, almost half of all Exocet are sold. 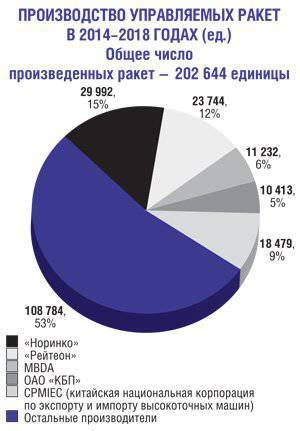 Boeing will sell 321 PKU Harpoon (Harpoon) in the amount of 289 million dollars through a modification of "block II". This rocket at a lower cost provides buyers with a reduction in risk, which allows it to maintain a steady flow of new orders. The Norwegian Kongsberg Defense still continues to sell the Penguin model, but its new rocket Naval Strike Missile will gradually expand its niche and will be sold in the amount of 171 units for the next five years. 101 million dollars.

In late January, London and Paris agreed to develop cooperation in the defense sector, including in the field of anti-ship weapons. A memorandum of understanding was signed confirming MBDA’s development of the ASGW (Anti-Surface Guided Weapon) perspective guided missile-controlled anti-ship missile system and orders of the missile by the two countries. The contract value is 500 million pounds.

The United States intends to deploy a low-profile long-range anti-ship missile LRASM by 2024. The LRASM program has been implemented since 2008 by the Department of Advanced Studies of the United States Department of Defense DARPA (Defense Advanced Research Projects Agency) and the Bureau of Scientific Research of the United States Navy. The need to create new weapons is due to the fact that the missiles in the arsenal of naval forces do not have sufficient flight range and are vulnerable to the breakthrough of the modern layered shipboard defense system. In addition, new anti-ship weapons should be autonomous and less dependent on intelligence platforms, communication lines and global satellite navigation.

LRASM - autonomous high-precision anti-ship missiles, launched outside the range of target air defense, designed for use in the Navy and the US Air Force. They are equipped with armor-piercing or high-explosive warheads, are autonomous all-weather weapons that can be used at any time of the day. The rocket has a multimode homing head, a data transmission line, and an improved digital anti-noise satellite navigation system for detecting and destroying priority targets in a ship order.

The Lockheed Martin company in 2009 was selected to demonstrate the LRASM RCC aviation variant. The first of three flight tests successfully conducted in August 2013-th. The company also received additional funding for a LRASM rocket launched from a surface ship in 2014.

The LRASM ASM is based on the concept of the AGM-158B JASSM-ER (Joint Air-to-Surface Standoff Missile-Extended Range) extended-range general missile, but uses additional sensors and onboard systems necessary for use in modern naval combat and destruction of surface ships. Among them, the data transmission line to the rocket, an advanced digital noise-proof satellite navigation system, a multimode homing head.

Sales of JASSM missiles will provide Lockheed Martin with a fairly voluminous niche (1,4 billion dollars) in the long-range missile segment. In general, this segment in the next five years will be 6,3 billion dollars received from the sale of 18 thousands of 550 missiles. The main players on this site will be “Raytheon” (737 million) with Tactical Tomahawk and AGM-164 Joint Standoff Weapon missiles, as well as the Russian Tactical Missile Corporation (524 million dollars).

The European MBDA will sell 2015 by selling the Storm Shadow missiles (Storm Shadow) certified for armament of Typhoon fighters from 418, as well as Taurus from the joint development of MBDA and Saab Bofors Dynamics million dollars.

The air-to-air missile sector will not be subject to significant fluctuations in the monitored period from 2014 to 2018. In total, during this time, manufacturers will deliver about 23 thousands of missiles of this type worth 7,2 billion dollars. AIM-9X short-range and AIM-120 mid-range missiles (Raytheon) will have 27,3 percent of total production and 29,8 percent of sales. 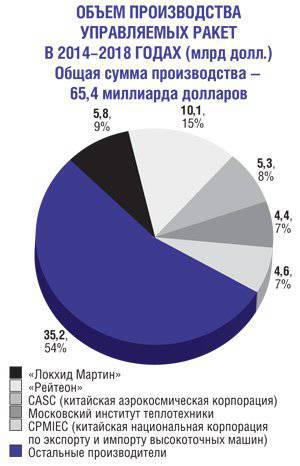 The upgraded AIM-120D rocket will be deployed in 2014 year, and the next will be the MBDA Meteor (Meteor) with a rocket-ramjet engine. MBDA expects the production of its air-to-air weapons to be 10,6 percent of total production. In monetary terms, the company's share can reach 20 percent due to the relatively high price of Mika (Mica) and Meteor missiles.

Domestic OJSC GosMKB Vympel them. I.I. Toropova "of the corporation" Tactical Missile Weapons "with products Р-73 and Р-77 will receive from their sales 15,8 a percent of total sales.

The sector of anti-aircraft guided missiles (SAM) is also unlikely to undergo any fluctuations in the next five years. In this market segment, 44 will sell thousands of 900 missiles worth 19,2 billion dollars, and the leader will be Raytheon with 35,3 percent.

In the niche of ship weapons, the greatest demand is expected for the RIM-116RAM and RIM-162 Evolved Sea Sparrow SAMs. And the largest amount of revenue will bring the company implementation of long-range missiles RIM-174 SM-6 and anti-missile (PR) RIM-161 SM-3. MBDA is developing Sea Ceptor (Sea Ceptor) for deployment on British Navy ships from 2016. The company also sold the New Zealand based on AIM-132 ASRAAM.

In the ground-based missile defense system, Lockheed Martin with its Patriot (Patriot) and SAMP / T and MBDA, offering MEADS (Medium-Extended Air Defense System) complexes, are fighting in the Polish tender. If the United States does not have any additional plans for the purchase of MEADS air defense systems, the partners in this program, Germany and Italy, intend to involve Poland to complete the development and start mass production of this complex.

As for short-range air defense systems to protect against unguided rockets and artillery mines, the share of Israeli Iron House and David's Sling is significant in this segment, which in November 2013 performed the first interception of a ballistic missile. Only Israel can buy Iron House 13 batteries. Other potential exporters are India and the Republic of Korea. The US Army also plans to deploy AIM-9X in a ground-based version to counter cruise missiles and UAVs.