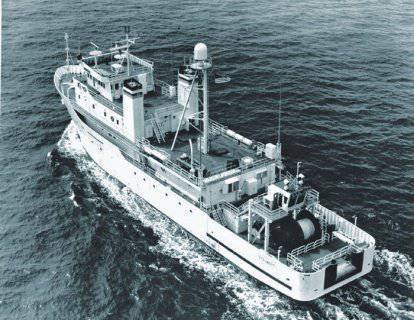 Recently, panicky publications have appeared in the press about the crisis of military underwater acoustics — implying Soviet and Russian passive underwater acoustics. Among such publications is Viktor Kuryshev’s article “Under Water, Darkness and Silence” (“NVO” No. 16, 17.05.2013). Surprisingly, the developers of Russian hydroacoustic devices are silently shy about this. Let's calmly, relying only on the facts, we will understand the situation.

IN THE RUN FOR SILENCE

The main task of military hydroacoustics (meaning its passive mode) is the detection of submarines of a potential enemy. With the advent of nuclear submarines (APL), this task has become even more relevant, especially in relation to missile submarines. As in other species weapons, there is a confrontation (antagonism) between the noise of submarines and the range of its detection by the passive paths of hydroacoustic stations (GUS) of submarines. In the US, the first to realize the need to reduce the noise radiation of submarines. This has led to an increase in the efficiency of passive regimes of GUS by reducing their operating frequencies in order to compensate for losses in the detection range of submarines. Reception frequencies decreased from 8 kHz to 3 – 3,5 kHz, which led to an increase in the diameters of the receiving antennas of the HAC to 4,57 – 8,0 m while maintaining the accuracy of direction finding of the target.

In turn, the transition of American submarines to a single-shaft propulsion system, an increase in the diameter of the propeller to 8 m with a decrease in the number of its rotations to 100 rpm and an increase in the number of its blades to seven (with a special saber-shaped blade) resulted in a significant decrease in the level of noise radiation propeller, including at discrete frequencies of sound of its rotation. At the same time, considerable funds were invested - up to 20% of the cost of building a boat - to reduce the noise emissions of NPS machines and mechanisms, including at discrete frequencies, which led to a significant reduction in the noise emissions of modern US NPS submarines by more than 100 times with the first samples.

In response to this, passive sonar switched to the infrasound reception range of extended towed antennas with digital processing of received noise information with automatic selection of discrete components of the target noise spectrum and its classification. A similar modernization of the passive canal of boat GAS was observed both in the United States and on Soviet submarines (AN / SQQ - 5 and Skat - 3). The difference in the detection range of low-noise targets by the Soviet and American boosted GAS was due to the difference in the noise emission of the American and Soviet submarines, which the Soviet submarines significantly exceeded the level of the American noise emissions by the end of the 80-s. This naturally led to a difference in the range of their detection. Thus, this brief excursion into the development of passive hydroacoustic equipment showed the absence of errors in the development paths of the Soviet GAS PL as compared with the US ones.

However, as early as the beginning of the 90s, unlike the American submarines, the third-generation Russian multi-purpose most low-noise submarines (the 971 project) effectively used non-acoustic means of detecting US Navy submarines following their wake (thermal and radioactive), which was Wednesday to five hours after the passage of the boat.

As for the statement of Viktor Kuryshev in the article “Underwater conditions of darkness and silence” that now the newest boats of the US Navy of the Virginia class are “fully equipped with vector-phase hydrophones”, this is not true. In the USA, only the possibility of using a conformal antenna array with oscillating velocity receivers on boats of this series (after SSN-783 "Minnesota") is being considered. However, at present, the high cost of the antenna and the complexity of its maintenance are the main obstacles to its use in submarines.

As for the “World Ocean Under Control”, citing data on the current use of various hydroacoustic facilities of the US Navy for hydroacoustic reconnaissance in the World Ocean, Viktor Kuryshev knowingly misleads readers, since these unreliable data indicate a large scale of US hydroacoustic reconnaissance . Thus, due to the reduction of the noise level of the third generation of Soviet (Russian) nuclear submarines, the effectiveness of the SOSUS noise-direction-finding system has sharply decreased. The reduction in financial allocations for the operation of the SOSUS system (from 335 mln. Dollars in 1991 to 20,5 mln. Dollars in 1995) resulted in a significant reduction in the staff and closure of its coastal posts. Currently, the 28 BGAS of the SOSUS 24 system is conserved, and the remaining four are used by civilian funding to solve the problems of determining whale migration routes and a number of hydrographic tasks.

At the present time, for the same reasons, the maneuverable SURTASS system was significantly reduced, in which in the period from 1993 to 1996, 12 (from 18) of the Stalworth-type hydroacoustic reconnaissance (QGAR) ships were withdrawn from the US Navy. Some of them were put on conservation, and the rest transferred to a number of interested US organizations and sold to other countries. As of today, only three KGARs of the TAGOG-19 "Viktories" type and one of the TAGOS-23 "Impekble" types - FAGOG-23 remain in the maneuverable hydroacoustic reconnaissance forces of the US Navy. One ship is in reserve. All KGARs are attributed to the Pacific Navy and World War II. In the advanced areas of the Pacific zone, the KGAR appears only sporadically.

Touched the contraction and aviation component of sonar reconnaissance system. Currently, the U.S. Navy aviation is receiving a new Poseidon P-8A base aircraft (created on the basis of the Boeing-737-800 passenger aircraft). According to the Pentagon’s military procurement plans, the Navy will receive 2018 R-117A aircraft by the end of 8, which should replace the 225 Lockheed Martin P-3C Orion used today, that is, halving the anti-submarine wing is planned.

I am sure that the experience of the Americans in creating a system of control over the World Ocean will be used to create the Russian Unified State System for Lighting Surface and Underwater Situations.

GAME IN CATS UNDER WATER

Go ahead. We are now aware of the three main causes of the crisis of the Russian (Soviet) hydroacoustics and the inability of the Navy command to independently understand the hydroacoustic deadlock. Let's see how this is the case in the US Navy and its NATO allies in the hydroacoustic complexes that are in service with nuclear submarines. Thus, the standard SAC of the US Navy nuclear submarines of the AN7 SGG-5 type and its numerous modifications with digital processing of received signals, the classification mode and the used towed extended antenna operating in the passive mode showed low efficiency in detecting low-noise targets. It is unable to carry out continuous covert surveillance of Russian modern submarines at a safe distance in a wide range of weather conditions.

In February, the 1992 of the United States Navy SSN-689 Baton Rouge (Los Angeles-type) as a result of a covert tracking of a nuclear submarine collided with a Russian submarine of the 945 project in the 12-mile Russian zone. In March, the 1993 of the Barents Sea also resulted from a secret tracking attempt by the US Navy SSN-614 “Grilling” (such as “Sturgeon”) nuclear submarine with the Russian strategic rocket carrier K-407 of the 667BDRM project (Delta-4). The Russian nuclear submarines in the collision received damage to the light hull and were repaired. As for the US submarines, the command of the US Navy decided that it was cheaper to withdraw them from the combat strength of the Navy.

As the SAC of the American nuclear submarines improved, clashes continued, moreover between American ships. Thus, on the night of 19 on 20 in March of 2009, the SSN-688 “Hortford” (of the “Los Angeles” type) collided with a landing-helicopter-docking ship (DVKD) LPD-18 “New Orleans”. The incident occurred in the Strait of Hormuz. As a result of the collision, 15 people were slightly injured on the submarine. The fuel tanks were damaged on DVKD, which resulted in 95 spills of thousands of liters of fuel. The US Navy cruiser “San Jacinto” and the US nuclear submarine SSN-765 “Montpellier” 14 in October 2012, collided during exercises near the US East Coast. The incident occurred on Sunday around 15.30 local time. This list can be continued by the collisions of the US Navy's multi-purpose submarines with fishing vessels of various countries, including in the 2014 year.

The most significant in this respect was the collision that occurred on the night of 3 on 4 in February of 2009. At great depths in the completely calm atmosphere in the central part of the Atlantic Ocean, the two most advanced nuclear-powered submarines of the British Navy, Vanguard, and the French Navy, Triumphator, collided during combat duty. The French nuclear submarine struck the British nuclear submarine with its nose into the cutting area at a short turn and, in all likelihood, not at a right angle, otherwise the consequences would have been more serious. “Vanguard” with noticeable dents on board (there was a question about its write-off) was towed to the port of Fanstein (Scotland). The French boat reached Brest under its own power, but received serious damage to the sonar fairing and the bow horizontal rudders.

This collision of the two newest missile submarines of the leading NATO countries demonstrated that, despite the perfect sonar weapons, they did not see each other even at close range due to the low level of their noise radiation.

WHERE IS THE EXIT?

Summing up the considered hydroacoustic detection of modern submarines, we can conclude that the “crisis of military underwater acoustics (boat)” is observed in all highly developed maritime states and this is explained by the laws of physics, and not by the errors of the developers of hydroacoustic facilities.

To get out of this situation, it is necessary to look for new, including non-acoustic, methods and algorithms for detecting low-noise targets. And to the author of the article “Under Water, Darkness and Silence,” I would recommend the reserve lieutenant commander to read the following books useful for him: V. Gordienko, V. Ilyichev. "Vector-phase methods in acoustics." M .: Science, 1989; Malyshkin G.S. "Optimal and adaptive methods for processing hydroacoustic signals." SPb .: Concern Central Research Institute Electroprib, 2011; Beletsky, Yu.S. "Methods and algorithms for contrast detection of signals against interference with a priori unknown characteristics." M .: Radio engineering, 2011.

In conclusion, it should be noted that the author’s statement that “specialists know that the most labor-intensive research and development work at enterprises actually carry out groups of specialists from 5 to 15 people and no more,” indicates that the author never worked at enterprises and I did not create with the group of 10 employees hydroacoustic complexes consisting of 67 (AN / BQQ-5B) or 122 (“Skat-3”) equipment racks, not counting antenna complexes - up to six per boat. The same applies to COTS technologies, the equipment of which does not pass military acceptance and cannot provide trouble-free operation in various climatic and vibro-impact conditions. Let this technology be used by the US and NATO allies (in disinformation order) or in their office equipment.

Saving the newspaper page, I left without attention many more controversial points, but I think that what is presented here is enough to create a certain opinion about the article reviewed.

Ctrl Enter
Noticed oshЫbku Highlight text and press. Ctrl + Enter
We are
Opinion: Why nuclear submarines of the 705 project were not needed by the fleetSeven nannies have hydroacoustics - orphan
Military Reviewin Yandex News
Military Reviewin Google News
18 comments
Information
Dear reader, to leave comments on the publication, you must sign in.