Kazakhstan will be "Cossack eli"? 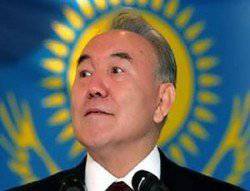 So, on February 6, during a visit to the Atyrau City Intellectual School, President Nursultan Nazarbayev proposed to abandon the name “Kazakhstan” in favor of “Kazak Eli” (“Kazakh people”). “In the name of our country there is an ending“ camp ”, like other Central Asian states, the president said,“ At the same time, foreigners show interest in Mongolia, which has a population of only two million people, while there is no ending in its name ” mill". It may be necessary to consider, over time, the issue of transition to the name of our country "Cossack eli", but first of all it is necessary to discuss this with the people.


Offer N.A. Nazarbayeva caused a storm of emotions in the Russian-speaking segment of the Internet, triggering the appearance of a whole wave of responses and expert comments.

During the time that has passed since the collapse of the USSR, an entire tradition has developed in Kazakhstan of changing the names of various geographical objects (toponymy). The reasons for this lie in the peculiarities of its historical development.

Most of the names, especially in the Russian-inhabited northern and northeastern regions of Kazakhstan, have traditionally been Slavic. Most of the cities inherited by Kazakhstan from the USSR were also founded by Russians and received Russian names.

Thus, Uralsk was founded by the Russians in 1584, Guriev, which became independent after Atyrau, in 1640, Semipalatinsk, in 1718, Pavlodar, in 1720, Petropavlovsk, in New York, was founded the Cossack outpost of Akmola in 1752. In the northern regions of the republic, the Slavic population has been living for 1830-300 for years, and, in fact, is indigenous there. Not surprisingly, local toponymy was also predominantly Slavic.

In 1991, Kazakhstan headed for the construction of a national state. Soviet period of his stories became regarded as colonial. Slavic toponymy, reminiscent of being in the composition of another, more powerful state, was in these conditions very inappropriate. Therefore, the change of Russian names to Kazakh began in the first years after independence. In December 1993, the Supreme Council adopted the law On the Administrative-Territorial Division of the Republic of Kazakhstan, which provided for “streamlining work on naming and renaming administrative-territorial units and clarifying the transcription of their names” creation under the government of the Onomastic Commission. The right to change the names of regions, districts and cities in accordance with the law belonged to the President of Kazakhstan, who was to make these decisions based on the conclusions of the Onomastic Commission and the opinion of residents of certain territories.

Kazakhstan is embraced by a real wave of renames. In 1991-2005 three areas were renamed, 12 cities, 53 areas of areas, 7 areas of the city, 43 railway stations and junctions, as well as 957 of small settlements. The names of some cities have changed several times. So, the regional center Tselinograd was first named Akmola, and later, after moving the capital city 1997 here in December, to Astana. In addition, the transcription of the names of 3 areas, 12 cities, 14 areas, 76 railway stations and 22 small settlements has been changed.

According to the head of the onomastics and terminology department of the Committee on Languages ​​of the Ministry of Information, Culture and Sports of the Republic of Kazakhstan Yerlan Kuzekbay, by 2005, the renaming of geographical objects was completed to 55-60%, with major flaws related to the northern and north-eastern regions. According to him, “for 14 years, much work has been done in this direction in the southern regions of Kazakhstan, but only by 30% has it been done in the northern regions and in the East Kazakhstan region”. Renamed streets, organizations and institutions. According to the same E. Kuzekbai, in the period of independence, the order of 890 institutions of health care, education, culture, sports and physical-geographical objects was renamed. In May, 2000, one of the leaders of the Onomastic Commission of the Chimkent Region, K. Duseymbi, at a briefing, said that he had renamed 200 streets for his life, but 800 streets still remained in Russian.

One of the last major renaming took place in 2007 on June 16 at a meeting held in Semipalatinsk, President N. Nazarbayev proposed to rename the city Semey, citing negative associations with the move with the 1949-1989 operating here. Semipalatinsk nuclear test site, which scare away foreign investors and potential tourists. According to him, the new name should also enhance the role of the Kazakh language and statehood. The proposal was favorably received by the onomastic commission, as well as by the majority of the population of the city, among whose residents the share of Kazakhs increased to 60% over the years of independence. The city council voted unanimously to rename, and 21 of June 2007 issued a presidential decree, according to which Semipalatinsk received a new name Semey.

Constant reproaches of the Kazakh intelligentsia against the authorities, who do not want to change the remaining Russian toponyms to Kazakh, suggest that the renaming policy will continue. According to the deputy of the parliament, the chairman of the party of the national association “Kazak eli” E. Abylkasymova, the modern youth “do not need a constant reminder of the sufferings of the Kazakh people in the past, that we have been under the heel of another, more powerful people for almost three centuries”. Therefore, it is necessary to rename the “inherited from the past” cities of Petropavlovsk, Pavlodar, Ust-Kamenogorsk, Kyzylorda, as well as such “meaningless names as Novorybinka, Elizavetinka, Sosnovka, Peterfeld, etc.”.

The Kazakh press repeatedly discussed the issue of renaming Pavlodar and Petropavlovsk. The newspaper “Zhas Kazak” in the article “To whom are the roads - Pavlov's“ gifts ”?”, Justifying the need for renaming, referred to the statement of President N.A. Nazarbayev, who told 10 years ago at a meeting with representatives of the Kazakh intelligentsia, that “onomastic issues will always be in the center of attention of the country's leadership. And there is nothing to look around timidly around. The names inherited from the colonial times, affecting directly the honor and dignity of our people, inappropriate to the old historical names of the area, sounding discordant ear, must be changed. ”

For the time being, the fear of increasing the emigration of the Slavic population, which still accounts for about a quarter of the population of the republic, but keeps at the same time the backbone of skilled workers and engineering and technical personnel, is keeping the mass change of Russian names to Kazakh Kazakhstan. A complete rejection of Russian-language names, justified by the need to combat the colonial heritage, will further enhance the alienation of Russians from the Kazakh state and the title ethnic group. To enhance migration attitudes among the Slavic population, the change of toponymy will create a more “favorable" psychological background.

Why did it take to voice the idea of ​​renaming Kazakhstan into “Kazak el?”

The main reason, apparently, is the desire to distance itself from other “stans” - the republics of Central Asia, which gained independence in 1991, as well as Afghanistan and Pakistan.

Most of them combine political and economic instability, creating a negative image of the entire region in the eyes of the global expert and political community. Kazakhstan, which has achieved some success on the path of social and economic development, with the help of a name change wants to emphasize that it does not belong to this “belt of instability”. In addition, the change of name will be a kind of summing up the results of the reign of N.A. Nazarbayev, emphasizing his achievements on the way to building the Kazakh national state.