Their terrible idea of ​​the beautiful. Guide to the future of our country from human rights defenders 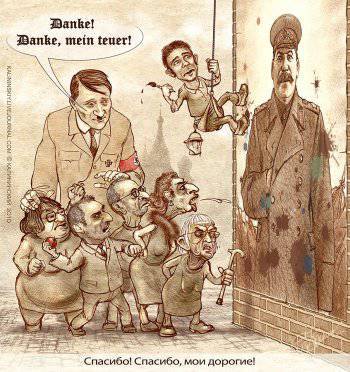 Dear readers, we have for you two polar news. Good - if yesterday we were discussing the need for national ideology within our narrow circle, today such a task seems to be realized at the very top. The bad news is that experienced human rights defenders from the Human Rights Council under the President of the Russian Federation (HRC) and the National Anti-Corruption Committee (NAC) have taken up the development. Moreover, they took it so famously that they promise to present a coherent ideology literally in a month, and now they are sharing its main directions. If you already hear the approaching crunch of a French loaf, then you are not mistaken - however, let's get everything in order.


The feeling of the unreality of what is happening arises already after reading the first lines of a fresh article in Izvestia with the pretentious title “The HRC and the NAC will work out the ideology of the country's development.” The characters of reference handshake, such as the chairman of the NAC and the member of the HRC Kirill Kabanov, do not hesitate to argue about the need for an ideology that consolidates society, and even assert that “historians, economists, journalists, experts responsible for the ideology will take part in its development time".

Next begins pure sur, which should be quoted in full:

“Human rights activists point out that all dynamically developing countries have their own version of a nationwide idea - the“ American dream ”in the United States,“ a society of average prosperity ”in China, and civil-law ideals in Europe. Russia lost the ideological confrontation with the West, one of the consequences of which was the flourishing of corruption after the collapse of the Soviet Union. The philosophy of personal enrichment replaced the communist ideology».

Then follow a lengthy argument that corruption is bad, but even worse, that our corruption is associated with the export of pilfered abroad. According to anti-corruption Kabanov, in tsarist times, corrupt officials were more patriotic, since they invested the dishonestly acquired in Russia. There is an opinion that such patriotism was explained by the elementary lack of technical capabilities in the 19 century to move capital with one computer click, the lack of offshore companies and globalization as such, but the anti-corruption Boar ignores these facts, explaining the patriotism of past crooks to some special “mentality” that we lost today.

This most illusive mentality, in the opinion of human rights activists, should be urgently returned by uniting the elites and society with the desire to invest in the development of the country. It can be returned, of course, by rolling back two steps back in historical development, which cannot be done without changing the economic structure in the first place. Human rights activists offer:

«Russia has always been primarily an agrarian country, therefore agrarian specificity is a historically established basic value, which in a certain historical the moment has come to naught. We need a new ideology of the land owner. A farmer is the most honest and responsible owner and employer, until he faces the threat of losing his land. A strong boss in the village is what Peter Stolypin wanted to achieve. To combat corruption, there should be an economic component of ideology that is understandable to everyone and that answers the question of where the country is going. China’s bet on the development of high technologies is not suitable for us, we can’t afford it anymore, since we are in catch-up positions. But we can have a clear agricultural idea: the fight against hunger, for example, the so-called social food».

At this point, the crunch of the French loaf became unbearable, and the sky was shielded by the mighty silhouette of the director Mikhalkov with a basket of Russian zipuns and jointer villages lovingly gathered on the ashes of Russian villages.

About how justified in the current situation, the rate on agriculture, exhaustively expressed the distinguished Anatoly Wasserman. I will only add that today, Russian agriculture and so well copes with the fight against hunger in distant countries and neatly increases this potential. If such a potential is to be increased a hundredfold, that is, to reshape the country into an agrarian manner (by abandoning other areas - the same heavy industry, since labor and capital are not enough for everything), as human rights advocates suggest, then this will naturally lead to a fall in agricultural prices. raw materials and the inevitable impoverishment of the village lovingly restored to life. That is, from the 19 century, we will naturally move into more ancient times.

The passage about the impossibility of catching up with China in the field of high technology requires special attention. In the first place, human rights activists probably confused China with Japan, otherwise it is not entirely clear why the leading China is experiencing an inescapable craze for Russian military equipment and cannot in any way even copy it properly. Although, perhaps, human rights activists under high technologies had in mind a wide range of Chinese video recorders and mp3NUMX players, but these technologies, firstly, are not high, and secondly, they are usually copied from Japanese samples. As for "we can no longer afford it (to rely on high technology - ed.), Since we are in overtaking positions," this is at least strange. The fact is that the strategy of catching up development has a lot of advantages and is successfully used by corporations and governments around the world. For example, Samsung once entered the pursuit of Apple, China itself is considered the benchmark of the “catching-up economy”, and the slogan “catch up and overtake!” Was in use in the USSR. Turning on the TV today, you can see dozens of proofs of the success of such a strategy, when in the Olympic competitions the lagging opponent keeps to the leading one, and overtakes it at the final line and becomes the champion. Sorry, dear readers, that I am writing the obvious, but as you can see for yourself, some human rights activists have not heard of them.

The second point of saving ideology from the HRC is predictably ridding the state of the domination of the special services:

«It is also important to reduce the burden on the economy of inefficient government agencies, including the power unit; its reform and alignment with the vital needs of the state and the capabilities of the country's economic complex should also become one of the elements of the new ideology».

It is possible to accept this thesis, but only if it is provided with a clear economic rationale - which structures are ineffective, what quantity and quality corresponds to the "vital needs of the state and economic complex" and how it all fits with the imagined agrarian future of Russia. So far this is just an outpouring of the professional desires of human rights defenders to the public and nothing more.

The idyllic picture of the human rights future with villages and patriotic corrupt officials harmoniously complement the fantasies of another member of the HRC, who reflects on the ideology:

“A member of the HRC, Ivan Zassoursky, believes that the ideology of Russia's development will be incomplete without attention to environmental issues.

We ourselves are not sufficiently aware of our advantages as a country. Russia is the keeper of the fifth part of fresh water on the planet, a huge part of forests. We give people water and air. And our mission is to keep them clean. This should be one of the country's development priorities. In addition, environmental technologies themselves can be an impetus for development, possessing a huge export potential - indicates Zassoursky».

It is hard to imagine how the conservation mission is combined with the task of feeding the whole world, perhaps, human rights activists among themselves simply did not consult. Or they do not know that agriculture has a more destructive impact on the environment than any other industry. All the more so on the proposed scale, when the country should actually turn into a giant food factory, and nature into a resource provider.

I will not even comment on the “giant export potential of environmental technologies” until human rights defenders give an example of at least one country that has built its economy and well-being on them.

All of the above is even in something funny, like a tank drawn by a child on square wheels with a small curve gun and a huge star on the turret. It's funny, if you do not take into account the fact that human rights defenders are threatening to present the final version in March. And then the question arises - why, in general, all this?

I have a version that we are faced with amateur, but with amateur sign. Returning to the very beginning of the article, I repeat that the need for ideology has ceased to be a marginal idea. Yesterday, the assertion that we would not allow a return to ideological dogma under any pretext seemed unshakable, and today human rights advocates themselves offer the ideology. Stop for a moment and feel here how smoothly but radically changed the mood, including the elite, since Putin’s return to the presidency.

So, the elite in time understood where the wind was blowing, and realized the inevitability of rolling changes. She realized that the request for ideology has matured so much that she is ready to be born from day to day in a spontaneous, so to speak, order. What kind of ideology it will be and how it will be implemented - at the end of the same article A. Prokhanov modestly said:

"...And third: to realize this, a breakthrough is needed, the idea of ​​a new modernization together with a new Christianization. And for this, a new elite should emerge, fully committed to the development of the country. All of these current effective managers are unable to become the new elite. And corruption - it is in the elite, it is overcome elementary. Whoever resists the idea of ​​development, bothers her - must be shot. Like in chinais'.

The current elite, naturally, does not want it to be “like in China.” He does not want to be treated like that, and does not want any other elite at all. Therefore, she is in a hurry to fit into the trend by offering her own ideology that is safe for herself. Filled with absurdities, as if unifying and saving, but in reality pursuing the only goal - in any situation, to keep it in itself unchanged. Hence, such a rush, hence such an abrupt change of rhetoric and a jumble of absurdities - now the main thing for them to swing, to delay time, in order to prepare for more thoughtful actions.

Therefore, you should not fear that all this nonsense about the villages will be taken seriously by someone - the real battles for ideology and the future are still ahead. But the fact that they are coming is already a fact, and we should be ready for them.

Ctrl Enter
Noticed oshЫbku Highlight text and press. Ctrl + Enter
We are
What you didn't want to know about England
Military Reviewin Yandex News
Military Reviewin Google News
79 comments
Information
Dear reader, to leave comments on the publication, you must sign in.