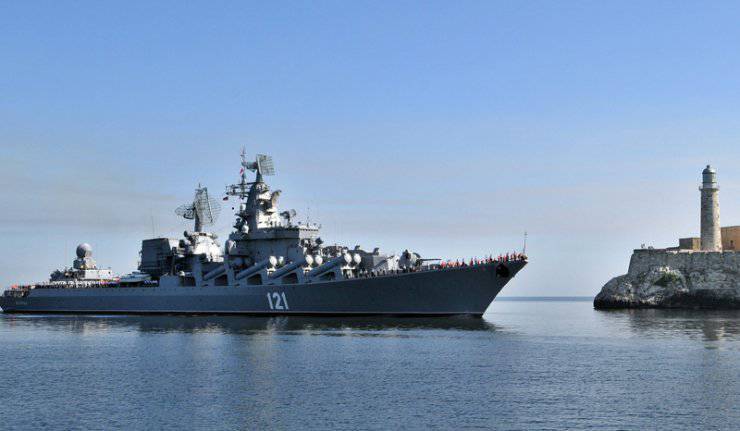 During the DEFEXPO-2014 exhibition in India, Head of the Department of State Defense Forces of the United Shipbuilding Corporation Anatoly Shlemov told the Voice of Russia about the prospects of the Navy landing forces and the future military-technical cooperation of the Russian Federation with India

- Anatoly Fedorovich, India was recently transferred to Vikramaditya. Will there be more joint projects of this scale?

- Our cooperation with India in no way ends with "Vikramaditya." Although, of course, this project is the most ambitious for all history. Work in this area is not limited to Vikramaditya. As you know, Russia supplied the aviation technical equipment developed by Nevsky Design Bureau for the Indian deck training complex aviation (the analogue of our “NITKA” is the Ground Test Aviation Training Complex. - Ed.), as well as for the Indian new aircraft carrier of Project 71. In addition, negotiations are underway for post-warranty maintenance and support of the aircraft carrier’s life cycle.

- During the work on Vikramadity, Sevmash gained extensive experience in repairing large surface ships. How will he be in demand? Should Kuznetsov be repaired?

- “Admiral Kuznetsov”, of course, needs serious factory repair and modernization. Now the fleet cannot afford to lose the aircraft carrier for a long time - the ship performs important political tasks. And in fact, this is the only platform for the training of pilots of deck aircraft. Conclusion "Kuznetsova" in the repair will result in loss of skills.

- Yes, the complex is built, and when it is fully commissioned, the aircraft carrier can be taken out for repair. I think this will happen in the coming 3-4 of the year.

- A radical solution to the issue would be the construction of a new aircraft carrier. Should I wait for him in the foreseeable future? What is the state of development?

- We are working on several options for a ship of this class, however, it will be possible to say something definite only after the approval of a long-term program of military shipbuilding, which should be completed this year. She will determine the construction parameters fleet and requirements for ships of the main classes until 2050.

- What can be said about the repair of "Admiral Nakhimov" (heavy nuclear missile cruiser)? How much does it cost?

- Now the preparatory work is underway, in the near future the ship will be put into the pool, where the Vikramaditya recently stood. Deadline for the ship fleet - 2018 year. As for the price - I would not call a specific price. The cruiser during the repair will receive new opportunities thanks to new weapon systems and electronic equipment.

- Is it possible to say that the repair of Nakhimov is the preparation for that for Peter the Great?

- Of course. "Peter the Great" is also extremely important for the fleet, performs a large amount of tasks. The ship joined the fleet in the 1998 year and has been actively exploited since then. The timing of its repair will soon fit, and it will have to be modernized in the same way as Nakhimov.

- How is the work on the project "Leader"?

- You probably know that last year the Ministry of Defense signed a contract for development work (R & D) “Leader” to create a surface ship of the ocean zone.

- How will it be classified? Is it a destroyer or a cruiser?

- While we are talking about a multipurpose combat surface ship of the ocean zone, this term more fully denotes the tasks and capabilities of a prospective ship.

- Is it possible to say something about the technical face of the ship? Displacement, energy, weapons?

- This choice has yet to be made - the fleet has not yet decided, it needs a ship with a gas turbine power plant - and then it’s just the size and displacement. If with a nuclear installation - these are completely different parameters. As for armaments, we have to work a lot on the ship of the ocean zone on the frigate of the 22350 project (a type of multi-purpose frigate of the far sea zone, designed to re-equip the Navy of Russia).

- The ships of the ocean zone to the fleet are sorely lacking, and now, in addition, the Admiral Chabanenko has been renovated. What changes are expected on it?

- The ship will be completely repaired, in addition, a “point” upgrade will be carried out on those nodes whose repair is impossible or too expensive.

- Will the ship's armament change?

- What for? It has high enough characteristics that allow this ship to perform its tasks. Due to modernization, we will additionally increase them somewhat, without spending on full replacement.
In general, it should be noted that Chabanenko and its predecessors of the 1155 project are exceptionally successful ships that ensured the presence of the fleet and the execution of missions in all key areas - the Pacific, Indian Ocean, Gulf of Aden, the Mediterranean Sea, the Atlantic ... We will keep them in the fleet - until there is enough bulk replacement.

- Why “Chabanenko” never received a continuation? Could you make an updated ship on the same general ship systems 15 years ago?

- I have a special attitude to this ship - I was responsible for its construction. It took a lot of effort - there was no money then. But the ship still managed to put into operation.
Vladimir Kuroyedov, then Commander-in-Chief of the Navy, came out with a proposal to build a series - if it were accepted, we could now have at least 6-8 modernized ships of this project. However, in those years, funding for the Navy was minimal. Construction of the series turned out to be simply impossible.

“Today, a series of frigates of the 22350 project is being built, but the launch of the lead ship for tests and its commissioning are constantly being postponed. Are there any changes?

- This year the ship will go to sea. There are problems with the project. They are associated with a large percentage of novelty - in energy, electronics, and arms we laid many promising solutions. Of course, it was not without difficulties, in particular with deliveries from the manufacturers of the corresponding weapons systems and electronic equipment.

We solve these problems. In December, a meeting was held in St. Petersburg under the leadership of Deputy Prime Minister of Russia Dmitry Rogozin, dedicated to these issues. Specific decisions were made on the timing of supplies of equipment and the obligations of manufacturers. We have high hopes for this project, it should give us an effective tool in the far sea zone, and partly in the ocean.

- What can you say about the prospects of the landing forces of the Navy? What is the fate of the “Ivan Gren” and the 11711 project in general (the type of the newest large landing ships intended for the landing of troops, transportation of military equipment and equipment)?

“The problems of the Gren are related, among other things, to a change in the technical specifications of the Navy, but we will hand over this ship next year. It is planned to build another 2-3 large amphibious assault ships of this project.

- But this is not enough to upgrade the landing forces? What type will be the main, "Mistral"?

- The military structure of the Navy will soon include two DVKD (amphibious assault helicopter-dock) of the type "Mistral", but these are quite expensive ships, and they will not be massive.

I believe that the main type of amphibious assault ship can be the medium-sized DVKD, similar in ideology to the Dutch Rotterdam, with a displacement of thousands of tons in 13-15. Such ships can build 6-8 units. In combination with the Mistrals, the 11711 project and the repair of existing BDKs, this will allow keeping the landing forces at the proper level.


Anatoly Shlemov's interview sheds light on the roots of many recent decisions in the field of naval construction, the Voice of Russia military commentator believes. The closest attention should be paid to the aforementioned dates for the start of construction of promising surface ships of the ocean zone, in conjunction with the decision to repair the 1144 project cruisers and negotiations on a possible redemption of the Ukraine cruiser (former Admiral) at the Black Sea Shipyard (Nikolaev, Ukraine). Lobov "), and repair the remaining ships of this class, as well as maintaining the readiness of the ships of the project 1155.

The mentioned timeline for the implementation of the project “Leader”, with the expected laying of the lead ship in the 2017-2018 area, means that the lead ship can be part of the fleet in about 2022-2023, the first production ship in 2024-2025, and more or less they will become massive only by the end of the second decade of our century. Such is the price of a long break in the development of new ships of the ocean zone, but Russia does not have the right to lose this part of the sea power. Under these conditions, ship repair projects 1144, 1164, 1155 - the only way to support the capabilities of the fleet in this area, and as far as possible - to increase them with a relatively quick result.

Ctrl Enter
Noticed oshЫbku Highlight text and press. Ctrl + Enter
We are
MiG with hookNo interaction - there will be no result
Military Reviewin Yandex News
Military Reviewin Google News
30 comments
Information
Dear reader, to leave comments on the publication, you must sign in.