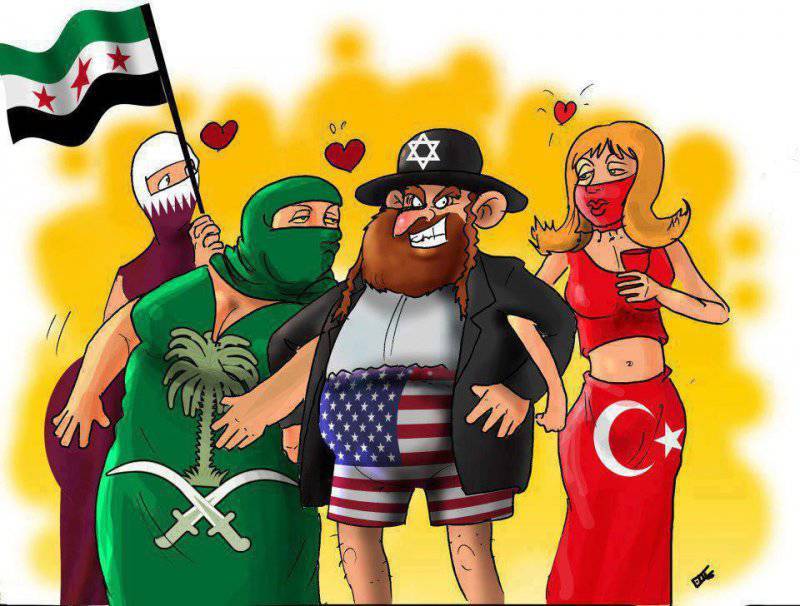 In the south of Syria, in the province of Quneitra, terrorists committed another crime. 12 February, they flew into the village of Al-Duvayya Al-Sugra in the south of the province, staged there pogroms, murders, robberies. Burnt many houses. The victims of the attack were eight people, of whom seven were members of the same family. Leaving the ravaged village, the criminals hijacked cattle that belonged to local residents. This bandit raid was the revenge of the residents who refused to support the terrorists and did not give them shelter.

As stated by the chairman of the Council of Ministers of the SAR Vail Al Khalki and the governor of Quneitra province Maan Salah al-Din Ali, “this is another heinous crime, like other militant atrocities, will not break the resilience of the Syrian people and will not shake their determination to end the terror and continue a course for the creation of a new Syria. "

In the east of the country in the city of Deir ez-Zor, bandits fired mortar shells in the residential area of ​​Al-Kusur. Two of its inhabitants died, several more people were injured.

February 13 in the village of Zhdeidet Artuz, Damascus province, militants fired at a funeral procession in the Eastern Quarter near an Orthodox church. One person died, five were injured, including a child-girl.

On the road between Damascus and Kharasta, terrorists opened indiscriminate fire on cars passing by. Three people injured, damaged 5 cars and a passenger minibus.

In the southern Syrian city of Daraa, gunmen shot at workers who worked at an electrical substation. Two employees were injured, equipment was severely damaged. The city and the surrounding villages were left without light.

Meanwhile, in Geneva, the negotiation process continues between the delegations of Syria and the so-called "opposition".

The Syrian delegation insists that the issue of combating terrorism and ending violence be discussed first. After all, it is the cessation of violence that is the first point of the Geneva communique, on the basis of which the Geneva-2 conference was convened.

However, the delegation of the “Qatari coalition” (as the representatives of the “opposition” are called in Syria, whose structure was formed in due time at the Doha meeting) insists that, first of all, they should discuss the creation of a transitional government.

At a press conference held after the regular negotiating meeting, the Deputy Minister of Foreign Affairs of the SAR, Faisal Al-Mekdad, stressed that the talk of the delegation of the "opposition" about the transitional government contradicted the priorities of the Geneva communique. According to him, trying out the positions of this document is ruined by the Geneva-2 conference.

The Syrian politician said: "We need a comprehensive discussion of such issues as the fight against terrorism, the rejection of foreign intervention and the cessation of the armament of bandit groups."

Al-Mekdad noted that the opposite delegation does not represent Syrian citizens. In addition, he criticized the actions of the Turkish government, which supports the militants. Because of this support, Al-Mekdad stressed, Turkey cannot be attributed to the part of the international community that wishes Syria peace. The same can be said about some other Western countries.

It should be noted that the majority of Turkish citizens negatively refer to the anti-Syrian actions of the Erdogan government. Proof of this was the demonstration held in Geneva, which was organized by the Turkish community in Switzerland.

Despite the cold weather and rain, Turkish citizens gathered in front of the UN headquarters in Geneva, who called for a peaceful resolution of the crisis in Syria. The protesters held in their hands the flags of their country and Syria, as well as portraits of Bashar Al-Assad. They said that the events in the neighboring country could not but affect Turkey itself, and Erdogan, with the support of the Syrian terrorists, is trying to embroil two fraternal peoples.

A trilateral meeting was held at the Geneva-2 conference, in which Russian Deputy Foreign Minister Gennady Gatilov, US Undersecretary of State Wendy Sherman and UN Special Envoy for Syria Lakhdar Brahimi took part. The latter stated:
“The implementation of the Geneva communique is very complicated. “Sometimes it seems that negotiations are close to failure. But we, the UN, spare no effort to move forward. ”

The diplomatic struggle continues in the UN Security Council. The West is trying to introduce a draft resolution on the humanitarian situation in Syria, which is obviously unacceptable because it contains threats of sanctions against only one side - the Syrian government. Thus, the West wants to provoke Russia and China to re-use the right of veto in order to accuse these countries of a “non-constructive approach”. Obama has already accused Russia of “indifference to the sufferings of the Syrian people,” “forgetting” that it is Washington that is one of the main root causes of this suffering.

Russia submitted to the UN Security Council its draft resolution on the humanitarian situation in Syria, more balanced and based not on threats, but on practical steps. As Foreign Minister Lavrov stated, “Attempts to antagonize the parties will only lead to the fact that they will take polarized positions - one side will consider that it is discriminated against, and the other, in this case, the“ opposition ”, will consider that everything is permitted. because its Security Council is not going to scold. "

In addition, the Russian Federation submitted to the Security Council a draft resolution on fighting terrorism in the SAR. “In this case, while we are starting consultations, a draft of another document, which is dedicated to the tasks of fighting terrorism in Syria. At the same time, we rely not only on the basic principles approved by the UN and other structures, but also take into account the appeal of the G8 leaders to the opposition leaders and the government to unite to eradicate terrorism from the Syrian land, ”the Russian Foreign Minister said.

Lavrov stressed that the West roughly interprets the Geneva communique, more precisely, its paragraph on the transitional governing body. He noted that Western partners put aside most important issues, such as combating terrorism, and ending violence, and implementing local pacification for the delivery of humanitarian aid. It all comes down to the task of the transitional governing body, and the Geneva communique is roughly interpreted in the context of a change of government.

Let's go back to Syria itself. The army is conducting a successful counter-terrorist operation in the Yabrud area between Damascus and Homs. On February 12, servicemen liberated the village of Al-Jarazhir and its environs from militants. On February 13, the terrorists were expelled from another village - As-Sekhel. The fighting continues on the plantations of "Rome" surrounding Yabrud, as well as in the nearby settlements of Al-Mseikhl, Dzheyrud, Ar-Rheiba. Hundreds of bandits from the Jabhat al-Nusra were destroyed, their shelters destroyed and weapons warehouses.

In addition, army operations continue in the areas of Kalamun, Zabadani, Dareya, Khan Ash-Shih, Mlekh, Adra and Jobar near Damascus.
And in the city of Homs extended temporary truce to continue the evacuation of citizens from the quarters of the Old City under the control of the militants, as well as for the delivery of humanitarian assistance to civilians who decided to stay in their homes. In addition to civilians, 70 militants, who surrendered to the authorities, left the area. They told that they had been deceived, that there were too many foreign mercenaries in the ranks of armed groups, who imposed their will on others. In particular, these mercenaries tried in every way to prevent them from surrendering to the authorities.

It is in such small steps for local reconciliation on the ground that there is hope for an end to the violence and suffering of the Syrian people. It is on this basis that a peace process could be built. But Western countries, instead of encouraging just such steps, make provocative statements, threaten with violence, arm militants who commit crimes, and in every possible way try to bring both Geneva-2 and the very idea of ​​peace into a dead end. They need a war in Syria.