The war was won by the communists and atheists.

March 31 2011
1
Rewrite historyscoundrels! Fascists! Rewriting ... Here are the bastards! But who first began to rewrite the history of our country, our homeland? Who started? We are brothers and sisters. We are Orthodox. We renounced the Soviet past and cursed it. And we curse in every sermon, in every article. We offensively called this time "a time of unprecedented persecution." But still mean they decided to ascribe to themselves all the good that was then, for example, the Victory in the Great Patriotic War. 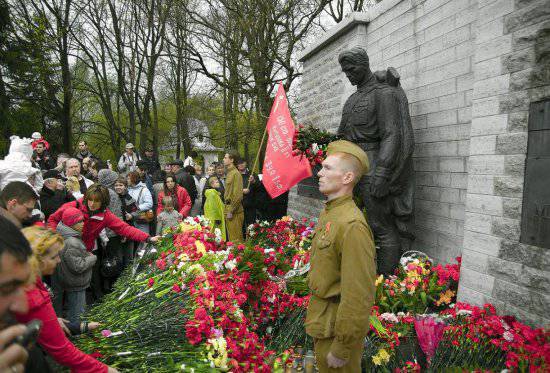 How deceitfully our words sound with us that the Orthodox people allegedly defeated the war. That almost thanks only to the Russian Orthodox Church and also - built on its money tank Column "Dmitry Donskoy" Victory was possible. This is a lie, brothers and sisters. The most real and shameless lie.
We have forgotten that the father of lies is the devil. And this is scary. And it is even worse that the priests and the hierarchs of the church lie. We wanted to take what does not belong to us. Yes, it turned out to be abandoned, trampled, drawn. But this is not ours, brothers and sisters. I'm talking about the Great Victory. The atheistic, communist state of the USSR won in the Great War. Well what can you do now? Who knows where and when he won. And Muslims won victories, and Catholics, but atheists won in 1945. Orthodox Christians do not always and everywhere win in wars.
Brothers and sisters, it happens that way too. Let us, brothers and sisters, calm down and we will not lie so godlessly. Otherwise, the word is not a sparrow; if you fly out, you will not catch it. Well now what can you do with the fact that in the war the people were defeated not by the Orthodox, but by an atheist people. And the same party, which organized the persecution of the Russian Orthodox Church, led this nation. And in the units there were no regimental priests, but there were just political commissars. And in the caps of this victorious people were not Orthodox crosses, and the stars with a hammer and sickle. And they did not go into battle with banners and icons, but with red banners — symbols of the October Revolution. It is this atheist people, overcoming their own strength, by inhuman effort, to bloody sweat, to bloody corns, filling the ground with blood, getting out of their skin, defeated the fascists, defeated fascism.

Rare exceptions, brothers and sisters, only confirm the rules, this is known to any schoolchild. Let's not envy the feat of the people loyal to us, who died then on the battlefields of the people-hero. We will not steal victory from the dead (and it will not work), we have nothing to do with that Victory. We, brothers and sisters, then, during the Great Patriotic War, with our Orthodox tricolor, the heroic defenders of our Motherland, somewhere near Moscow or in the Brest Fortress, or near Leningrad, or at Stalingrad, or near Kursk, would have been shot, not even asking our holy orthodox name with you. And they would have shot with the blessing of our Soviet hierarchs and priests. And rightly so.

This war is not our, not Orthodox, feat. This is a feat of atheists and communists. After all, it was the Communists who were first of all shot and hanged by the fascists, and not by Orthodox Christians. It’s after all that fascist butchers cut the stars on the chest of the communists, not the Orthodox. It is their feat, not ours. Leave it to them. And let us make our own feat and we will not appropriate someone else’s, cheat and lie.

Of course, it would be very good if the people who died for our Fatherland were Orthodox believers. We would like so much, brothers and sisters. Of course, it would be nice if each battle began with a prayer. Of course, it would be good if every Russian warrior went to battle with Jesus prayer on his lips and in his heart, and died not with the words "I ask you to consider me a communist", but with the words "God is with us." But in that war it was not so, brothers and sisters. Rather, it was so, but not in the Red Army, but among the fascists - German, Italian, Estonian, Romanian, Bulgarian; from Vlasov; OUN and others. They also have numbers. Yes, God was with them, as they thought of themselves. Yes, they performed prayers, they prayed before the battle, they were baptized. On their fascist standards and emblems it was written: "God is with us." There were crosses on their tanks and airplanes. Yes, crosses, brothers and sisters. Not the stars, not the hammer and sickle, but the crosses. It was they, the fascists, who restored the temples and revived the Russian Orthodox Church in the occupied territories. And this is their fascist Vlasov flag - exactly the same one that is now developing over the Kremlin and is now our state flag, adorned the church monasteries. (By the way, this flag does not fall under the law prohibiting Nazi symbols?)
So, it is we, brothers and sisters, who began to rewrite history, and not Estonians and Poles. We! It turned out that we did not need those ideals and that history, those monuments and those red banners that we replaced with our Orthodox tricolors. And that Great Patriotic War, that Great Victory will remain for centuries, no matter how cunning and hypocritical we are. And in history this Victory will remain precisely as the Victory of the first in the history of the socialist state of the USSR over fascism. Like a victory with a red communist flag, a symbol of the revolution, over the Reichstag. Not our war. Not our victory. Not our revolution. Not our banner. Not our story. And our story, brothers and sisters, which, as you and I have already learned well, was "an era of unprecedented persecution."

So well done Estonians! So, brothers and sisters? Estonians are more humane and better than us, for so long in the center of Tallinn they suffered a communist symbol - a monument to the Soviet soldier-liberator. We would be with you, brothers and sisters, being in the place of Estonians, with our Orthodox humility and patience would demolish the monument the next day after the declaration of independence. And the more cynical our cries for the protection of "our" monuments. Our ... It's funny.

They are not ours, these monuments, brothers and sisters, they are Soviet. We repudiated them, insulted, slandered and betrayed that time, those people, that history, those ideals, betraying our fathers and grandfathers. They are these monuments, Soviet. Not Orthodox, but Soviet, communist. They are red from the spilled blood and from the faith of the dead fighters. Their faith was communism. Well what can you do now. They who perished in that war hated fascism and capitalism. And even more, they, the soldiers of that Great War, hated the Vlasovite traitors with theirs, and now with ours, brothers and sisters, with the tricolor. They hated our current state flag, tricolor, and died under the red communist banners.

There, in mass graves, not Orthodox soldiers lie, but communists and atheists! Why should we wriggle on them? We would be with them on opposite sides of the barricades. Why are we lying, brothers and sisters?

Why do we, brothers and sisters, decide to appropriate to ourselves what does not belong to us?

I think, brothers and sisters, that if we do not stop in godless restoration of history and rewriting history, our Motherland, Russia, will disappear from the face of the earth, as a sovereign, independent state. And we are to blame for this, Orthodox brothers and sisters. We, brothers and sisters, woke up the terrible infernal demonic forces with our mad talk about who should be buried, who should be reburied, where the necropolis should be removed from, so as not to prevent us from raging. Who to bury, and who to dig. Who canonize and curse someone. We dared to touch our dirty, self-serving, infirm, vengeful little minds and souls to the Eternal. And revenge. Himself revenge.

We did not leave descendants and God a court - we ourselves began to judge the dead. Revenge them. We thought they would not answer. And they answered and will respond further. If not they, then the Lord, loving us and desiring our salvation, will stop us, seeing our stupor in lies. You and I, brothers and sisters, began to disturb our disrespectful chatter and, moreover, began to judge! deceased. And even some doubtful graves of some doubtful personalities, either emperors, or not, or generals, or traitors, have already been dug up, poor bones have been moved from place to place, guided by political momentary self-serving meaning, buried, sang “Eternal memory” and everything And everything?

You thought so, brothers and sisters? No, brothers and sisters, not everything. The person, the people who assume the responsibility of re-burial of the already buried, and thereby trying to change the status of the deceased, trying to change the spiritual balance, such people must be confident in their responsibility for this. This responsibility is inevitable. And it is already coming true before our eyes. After all, we have released the graves from the ground. After all, we began to dig up and read the funeral of false power, then false heroes. And the demons, grave-diggers came out. And now the digging of graves and the demolition of monuments will begin everywhere. And they will continue as long as you and I, brothers and sisters, do not cease to avenge the dead.

Although it may be too late, we are girdling in our unjust selfish greed of the dead. Barbarism will continue. And if we, brothers and sisters, again begin not to blame ourselves, and together with all sorts of yakimenks we will start blaming either Estonians, then Poles, or Georgians — know, brothers and sisters, there will not be a single grave for Soviet soldiers. And you think they will be replaced by monuments to Russian Orthodox soldiers?