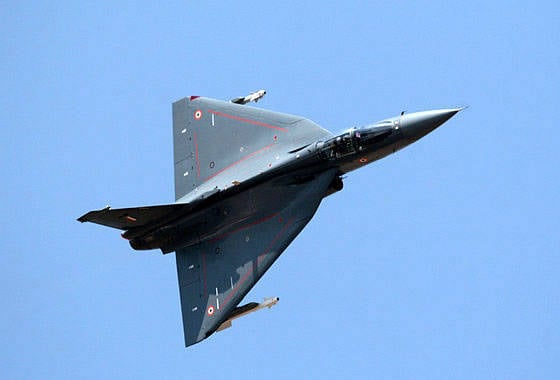 In a written response to the request of the deputies of the upper house of the Indian Parliament, Defense Minister AK Antony said that the cost of the development program for light combat aircraft LCA "Tedzhas" is 79,66 billion rupees (1,09 billion dollars).


This amount, in addition to the cost of developing LCA "Tejas" ("Phase-1" and "Phase-2"), includes the cost of assembling 15 prototypes and creating the infrastructure for the production of 8 aircraft per year.

At the same time, as A. Anthony noted, the share of components of national production in the LCA design is about 60%. As a result, the cost of production, as well as the costs during operation of the Tejas, will be significantly lower than that of any other aircraft of comparable class.

The cost of development programs of LCA "Tejas" for the Air Force and its options for the Navy is:

At a ceremony held in Bangalore on December 19, 2013, Indian Defense Minister AK Anthony handed over to the Air Force Commander, Chief Marshal aviation N.A.K. Brown's certificate of achievement by the LCA Tejas light combat aircraft of initial operational readiness for combat use (IOC). This document allows you to start mass production of LCA.

Originally planned to produce eight aircraft per year. Further, it is planned to increase the annual assembly rate to 16 aircraft. The first 20 aircraft LCA aircraft ordered by the Indian Air Force will be produced in the IOC version. The assembly of the next batch of 20 machines will begin after reaching the state of full readiness of the LCA for combat use (FOC).

According to Business Standard, the Indian Air Force approved a plan to form six Tejas squadrons — two squadrons will be equipped with Mk.1 versions and four Mk.2 versions. In the future, they will replace the outdated MiG-21 and MiG-27.

In addition, the Navy plans to buy 40-50 aircraft "Tejas" for promising aircraft carriers.

According to Hindustan Aeronautics Limited (Hindustan Aeronautics Ltd), the final cost of the fighter version of the Mk.1 will be 1,62 billion rupees. The average cost of one aircraft as part of the serial production of 344 planes of all versions planned for purchase (294 units for the Air Force and 50 units for the Navy) is estimated at 2,09 billion rupees (33,5 million dollars).

According to Indian expert Pushpindar Singh, an order for a larger number of Tejas fighter jets would further reduce the price, which would increase interest in him from the Air Force of a number of countries planning to replace the MiG-3500 fighters in total to 21, Mirage-3 »And early versions of F-5 and F-16.

Competitor "Tejas" in the world market, comparable in class and price parameters, is JF-17 "Thunder", which is assembled in China and Pakistan.

Ctrl Enter
Noticed oshЫbku Highlight text and press. Ctrl + Enter
We are
Russia firmly occupies a place in the global arms market 2 and will maintain its position in the foreseeable future.Armored Vehicles Market in the Middle East in 2005-2012 and forecast for 2013-2016
Military Reviewin Yandex News
Military Reviewin Google News
5 comments
Information
Dear reader, to leave comments on the publication, you must sign in.