West has prepared another draft resolution on Syria 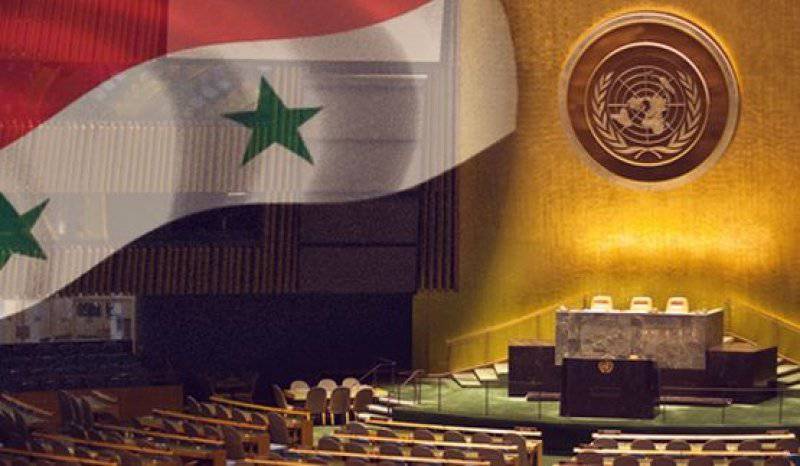 For a long time the United States did not threaten Syria with a military strike. Many even thought that the West had abandoned the idea of ​​unleashing a new war in the Middle East, but no: the other day, Barack Obama, after a long break, spoke again about the benefits of democratic bombardment. This led to the beginning of a new crisis in the UN Security Council. The West wants to push the resolution-ultimatum in order to once again accuse Bashar al-Assad of “disrupting” the peace talks, introduce new sanctions against him, and in the future even start open aggression against Syria. Fortunately, Russia has prepared its own draft resolution, which takes into account the interests of not the militants, but the Syrians.

Humanitarian crisis as a reason for war

In accordance with the resolution prepared in the West, Syrian troops must cease hostilities within 15 days and allow international humanitarian aid workers to go to Homs and other cities. Damascus would be glad to help the UN to ease the Syrians, but the trouble is: the blockade of cities is the work of jihadists.

If the army retreats, the situation with the provision of civilians with food and medicine will only worsen. Extremists do not recognize either the UN or its resolutions, and there is no way to influence them - except to cut off the funding channels. But the West will not do this: the attack of militants with the support of Saudi Arabia and Qatar is quite satisfied with it.

The resolution is also false because a temporary truce regime is already in effect in the area of ​​Homs. The Syrian authorities and the opposition agreed on a cease-fire, but the militants still attack civilians and bombard the positions of the military. Because of this, it is difficult to evacuate the inhabitants of Homs, and there are also problems with sending food, medicine and other humanitarian supplies to the city. This is reported by the UN staff in Syria, but it seems they are not heard by any of the higher-ranking officials.

Interestingly, this time the desire of the West was voiced by Luxembourg, Australia and Jordan - the closest US ally in the Middle East. It is these countries that brought to the Security Council's consideration a scandalous anti-Syrian resolution. Obviously, its authors are not Australian diplomats: the big players just do not want to be substituted, so they asked their friends to become whipping boys for a while. After all, even in the West, they understand that this resolution is false, and a squall of fair criticism will fall in its address.

Russian representatives at the UN have already made the first statement: the West is cunning when it says that cities are blocked by Syrian troops. Based on this, it can be concluded that the resolution prepared by the United States and its allies is aimed at helping Islamic militants, and if adopted, the humanitarian disaster will only worsen.

According to the Foreign Minister Sergey Lavrov, the West is now promoting the topic of a humanitarian catastrophe as a reason to intervene in the Syrian war. Chemical situation weapons failed to use to attack Syria, and now NATO is looking for other plausible excuses.

Grigory Kosach, a professor at the Department of Oriental Studies at the Russian State Humanitarian University, believes that the “humanitarian bombardment” scenario can be implemented in Syria. Almost all military interventions in the nineties and zero years were carried out under the slogan “We will defend our fellow believers!”, “Support the oppressed!”, “Stop the genocide!” And so on. Bombing was presented as a boon to the peoples who suffer from them.

Now the West is trying to use the same rhetoric, insisting that Bashar Assad cannot ensure the safety of his own compatriots. It is said that not all people to be evacuated were taken out of Homs, and those who were able to leave the city did not find themselves in places where they should be.

Russia will protect Syria. So far by diplomatic methods

Against the background of a worsening humanitarian crisis, Barack Obama said that the “sufferings of the Syrian people” must end. Of course, the politician has in mind those Syrians who live in the territories controlled by the legitimate leadership of the country. The president added that Syria’s neighbors, namely Lebanon and Jordan, are suffering because of the war. In order to stop the fire of war, Obama proposes a military strike on Syria. Such statements are more than proof that the United States initially counted on the implementation of the military scenario, and a peaceful settlement is just a cover behind which the true intentions of Washington are hidden.

The West and the jihadists use negotiations exclusively to build up their military power. Despite the fact that the dialogue in Geneva lasts for years, it did not have any positive effects. Bashar Asad understands that negotiations are meaningless, and he is also preparing for a fight with the enemy - no longer with the militants, but with their sponsors.

Interestingly, Obama promised to protect Jordan and Lebanon, and even wrote them down as an ally of the United States, but he did not say a word about Israel. This is due to the cooling of relations between the States and Israel: the United States in recent years has taken steps towards the Palestinian Authority, and Tel Aviv is unhappy about this. However, Israel doesn’t need the help of the USA - in Washington they think that it can stand up for itself. Temporary differences do not matter.

In response to the provocative draft resolution prepared by the West, Russia plans to turn to the UN Security Council with an alternative proposal that takes into account the interests of the people of Syria. This was announced by Alexei Zaitsev, head of the press service of the Russian office at the UN.

According to Gennady Gatilov, deputy head of the Ministry of Foreign Affairs, the Russian draft resolution contains a call to unite the efforts of the international community in the fight against Islamic fundamentalism. The cornerstone of the resolution is the threat of terror from the jihadists who flooded Syria. After all, the militants, so adored by the West, represent a real threat to the security of peaceful Syrians, and impede the work of international humanitarian organizations.

On the sidelines of the UN, both Russian and Western projects are now being discussed. Most likely, voting on both resolutions will be postponed until next week: it will take a long time to arrive at an agreed decision.

For now opposition under Homs proceeds. Due to the fault of Western sponsors and monarchies of the Persian Gulf, peaceful Syrians are dying. The UN ignores this fact: according to the organization, Bashar Asad is to blame for everything. And although the absurdity of this statement is obvious, it is impossible to convey it to foreign diplomats: they categorically refuse to consider alternative points of view. Most likely, because of this, the Russian resolution will be vetoed. The same Russian representation at the UN will respond to the West, depriving it of a pretext for a military invasion of Syria.

However, the current negotiations in the Security Council are just a small diplomatic battle. In the future, the West will find a thousand other reasons for organizing the next “humanitarian” bombardment. Unfortunately, it is impossible to stop every provocation in the bud, and, sooner or later, the question of intervention will openly become the order of the day. Then Russia will have to say the final word: it’s necessary to stop the aggressors at any cost.