February 14 2014
22
Small weapon designer G.A. Korobova has long been widely known. Machines of this designer, created in the second half of the forties, used in their design original ideas designed to provide high performance. While working at the Tula Central Design Bureau for Sports and Hunting Weapons (TsKIB SOO), Korobov created several automata built according to the bullpup scheme, including the three-barreled TKB-059. However, Korobov was not the only innovator in TsKIB SOO. At the beginning of the sixties, N.M. proposed his version of a promising automaton built according to an unusual pattern for domestic weapons. Afanasyev. 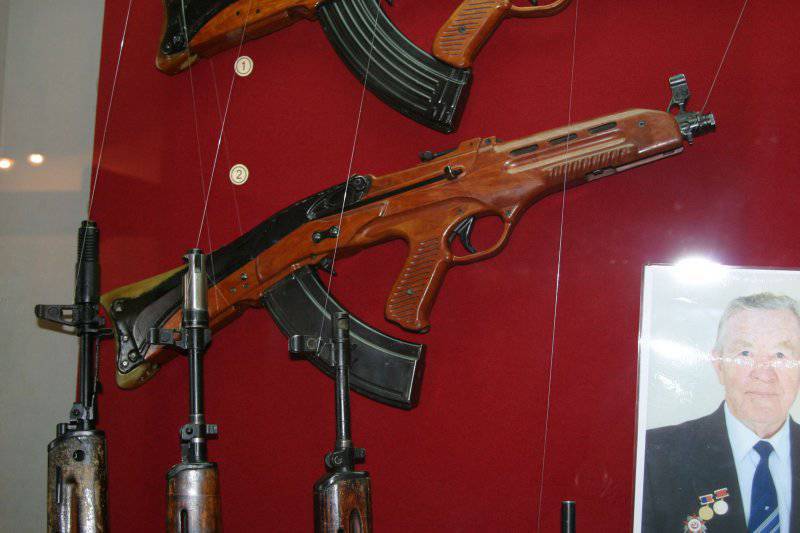 In 1963, Afanasyev completed work on the new TKB-011 submachine gun. In developing this project, the designer used some of the ideas previously tested in the arms of G.А. Korobov. The design of the Korobov and Afanasyev automata is related to the bullpup layout, the ammunition used, the extensive use of plastics and a number of other details. At the same time, the weapons had several serious differences, which did not allow to consider new automata as versions of the same design.

The Afanasyev TKB-011 machine gun was designed according to the bullpup scheme. His receiver had the original form: its front and rear parts were angled to each other. The back of the receiver also served as the butt and was equipped with a plastic butt pad. The barrel box was attached to the bed of complex shape, consisting of two symmetrical halves. The prototypes of the TKB-011 family of machines stored in the Tula Museum of Weapons have a box made of wood, but some sources claim that it was supposed to be made of plastic. Perhaps prototype weapons were equipped with wooden parts to simplify manufacture.

In front of the TKB-011, there was a rather long forearm that covered the barrel and allowed to hold the weapon. Immediately after him, the author of the project arranged the trigger bracket and the fire control handle. At some distance from the handle, behind the “bend” point of the receiver was the receiving window of the magazine for 30 cartridges 7,62х39 mm. As can be seen from the available photos, together with the TKB-011 submachine gun, it was proposed to use the slightly modified store of the first Kalashnikov assault rifles. The shop latch on the Afanasyev machine was located in front of the receiving window.

In front of the receiver, on its right side, there was a groove for the bolt handle. Above the back of the groove was provided a window for ejection of the sleeves, which had a characteristic oval shape. This shape of the window was chosen to ensure proper ejection of the liner. One of the main problems of bullpup layout is the difficulty of using a weapon by a left-handed shooter. The TKB-011 submachine gun had to throw the spent cartridge cases right-forward, taking them away from the shooter’s face.

Unfortunately, there is no reliable information about the operation of the mechanisms of the TKB-011 automaton. It is known that this weapon used the energy of powder gases of the cartridge. Certain questions are caused by the original curved receiver. Its form directly indicates that during firing, the bolt, moving back and forth, should change direction. In other words, when sending the cartridge and removing the cartridge case from the chamber of the barrel, the shutter should move along the axis of the front part of the receiver. Moving back and grabbing a new cartridge from the store, it should move through the grooves in the back of the receiver. The method of locking the barrel is unknown. Probably used to lock the bias of the shutter. The return spring of the bolt was located at the rear of the receiver. 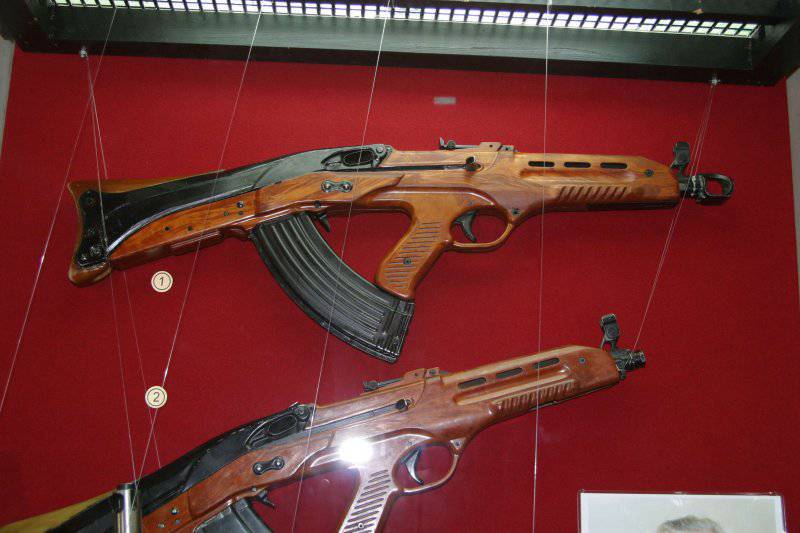 At the top of TKB-011M, at the bottom of the machine - without the letter "M"

The sights of the TKB-011 submachine gun consisted of an open sight and a front sight. It should be noted that the machine gun Afanasyev suffered the same "fate" as the other weapons of the bullpup layout. Thus, the reduction in the overall size of the weapon due to a separate butt led to a decrease in the length of the sighting line. In addition, the placement of the main mechanisms in the middle and rear parts of the machine caused a pronounced rear centering of the weapon. Alignment, as well as the relative position of the barrel and the butt, led to an unacceptable barrel toss when firing.

The identified deficiencies of the TKB-011 automaton led to the appearance of its first modification - TKB-011М. The 1964 project of the year implied some improvements intended to eliminate the existing problems. The most notable refinement was the muzzle brake compensator. DTC had a horizontal lower and inclined front plate, as well as a narrow jumper at the top. Because of this form of brake-compensator, the powder gases had to go up and sideways, thereby reducing the recoil momentum and tossing the barrel.

The second noticeable refinement in the TKB-011М version was applied in the used store. On the machine gun of the first option between the magazine and the pistol grip there was a small gap with which the weapon could catch hold of the shooter’s equipment or some other object. To avoid this, Afanasyev changed the shape and size of the fire control handle. Now the lower front part of the store rested against a special groove on the underside of the handle.

Finally, in the 1965 year N.M. Afanasyev created the most original and unusual modification of his machine gun. The TKB-011 2М project envisaged several notable changes aimed at improving the weapon characteristics. First of all, the fact that almost all the metal parts of the machine are hidden under the wooden and plastic ones is striking. In addition, the TKB-011 2М was missing a muzzle brake-compensator. Significant changes have undergone automation, as evidenced by the characteristic curved groove of the bolt handle and the window of ejection of the sleeves transferred to the left side of the weapon. 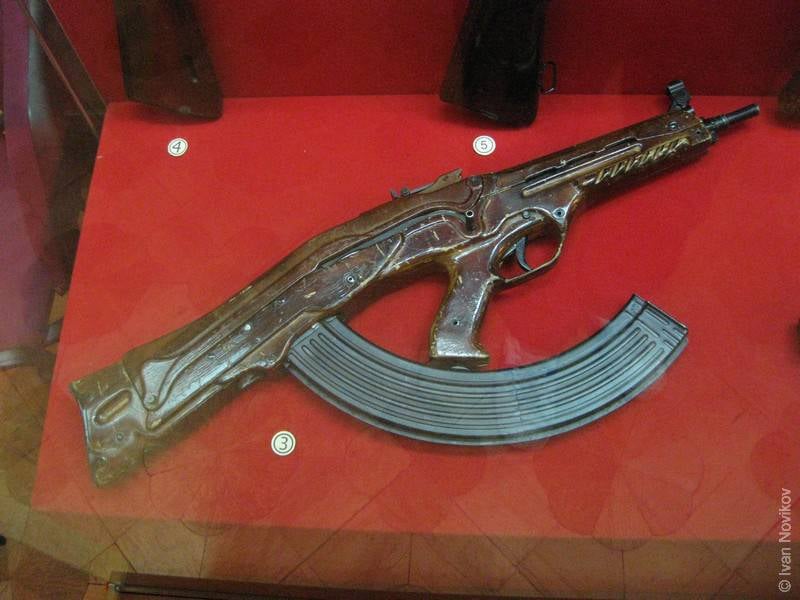 Especially for the machine TKB-011 2M was created a new store of higher capacity. On the basis of a store borrowed from Kalashnikovs, Afanasyev created a design that could accommodate 50 cartridges 7,62х39 mm. The photos of the promising automat show that the prototype store was made from parts of standard AK / AKM stores. The machine shop TKB-011 2M, as in the previous modification, with the front part rested against the fire control handle. In the light of its size, such a feature of the installation looks correct and logical.

In the mid-sixties, all three machines of the TKB-011 family passed tests and soon went into storage, later becoming museum exhibits. Despite the interesting design, which had great potential, the new machines were not without serious flaws. Their design was sufficiently difficult to manufacture, and also required serious refinement. The short length of the aiming line and specific balancing affected the accuracy and accuracy of fire. The combination of characteristics determined the fate of the entire project. The work on the TKB-011 project was discontinued. Later N.M. Afanasyev created several new machines, but they were built according to the classical scheme.