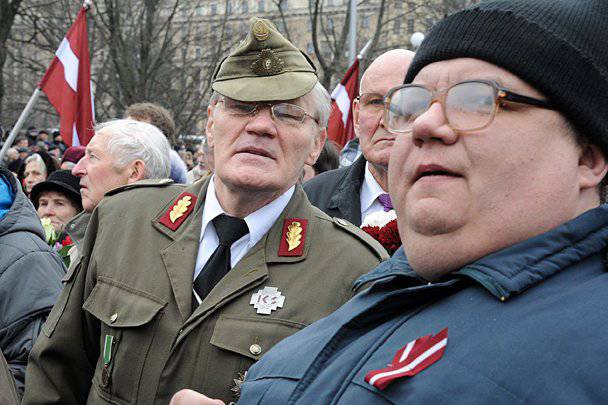 The Baltic states, which have completely lost a third of the population and their state sovereignty in the course of their absorption by the European Union, continue to amaze with “legal innovations”.

Following Lithuania, Latvia is preparing to adopt an article introducing criminal liability “for denying the Soviet occupation”.
“In Lithuania, this article is already in force and is even being applied. To hide the truth "
In January, 1991, during the "assault" of the television tower by the Alpha group and our army soldiers, civilians and one Alpha officer were killed. Blame hurried to lay on the army. But the fact is that during the investigation it was documented that all the victims of bullets received shots “from the top down”, while the military personnel moved from the bottom.
In addition, the soldiers did not receive live ammunition, and in tanks there were only singles. It was a colossal provocation, necessary, like today's "killed by" Berkut "on the Maidan," to stir up hysteria and compromise the authorities.

The victims of January 1991 of the year are today's foundations of an independent Lithuania. But the truth in Lithuania, no one needs.

When the Lithuanian politician Paleckis announced that provocateurs were shooting from rooftops on this day, he was tried and received a suspended sentence. Witnesses who claim that the troops did not shoot, but “unknown snipers” shot, are under pressure. Even though in 1991, people were killed from weapons, which was not in service with the army or special services.

Further история like a detective. In 1991, the investigation materials were transferred by the USSR Prosecutor’s Office to the Lithuanian Prosecutor’s Office. And since then, no one has seen these volumes. Lithuania refuses to give them for review. The investigation was never carried out. And the other day in Lithuania, a trial began in which more than 70 army officers and CPSU officials were accused of war crimes. That is, in the deaths of people in January 1991.

That is why we need an article about the ban on denying occupation. You say that it was not the soldiers who shot you - you get a sentence. You say that the soldiers did not have live ammunition and orders to use weapons - you deny the occupation. Again article and term.
After two decades, Lithuania suddenly decided to settle accounts with the officers who carried out the order. Why? To show officers of Ukraine today that they will be pursued through 20 for years. If they do not change the oath ...
This is in Lithuania. And Latvia followed in its footsteps: “The Legal Commission of the Seimas of Latvia on Tuesday approved amendments to legislation proposed by the ex-Minister of Justice Janis Bordans, which criminalize“ for denying the Soviet and Nazi occupation of the republic ”.

The government of Latvia believes that the republic was occupied by the USSR from the 1940 to the 1991 years. Russia strongly disagrees with this approach. At the moment in Latvia there is no penalty for denying the occupation. The amendments provide that public denial of aggression against Latvia, its justification and glorification may entail imprisonment for up to three years. ”

On this occasion, I want to say the following.

1. Latvia entered Russia "in three sessions", the first part - on the Peace of Nishtad with the Swedes under Peter the Great, in 1721 year. In 1772, according to the first partition of Poland, Latgale was annexed to Russia. The third part - Courland - was purchased in 1795, by Catherine the Great from the Duke of Courland. No one has ever contested these acquisitions of Russia. Before 1917, the state of Latvia never existed in the history of mankind, it never declared separation, did not have such a right according to the laws of the empire and was recognized by the whole world as an integral part of the Russian Empire. Conclusion: Latvia’s withdrawal from Russia is illegal by 100%.
2. Independent Latvia was created on the basis of a treaty with Lenin and the Bolsheviks in 1920. That is, for this, the Bolsheviks-the legitimate authority. When the same Bolsheviks, but already under Stalin, and Latvia returned to Russia-the USSR, for some reason this should be considered illegal.
3. The term "occupation" has a clear legal interpretation. And it implies being in a state of war. That is, in the course of hostilities and the declaration of war, one country occupies another. That is, the word “occupation” cannot and should not be used arbitrarily. Like any other legal terms.

4. The entry of Latvia into the USSR was as follows. October 5 Latvia 1939 signed a mutual assistance agreement with the USSR. According to this document, military bases of the USSR were created in the territory of Latvia. Is there something "occupation" in this? If yes, then Latvia is still occupied by the USA, since foreign troops are located on its territory.

(In passing: having signed the same agreement with the USSR, “Lithuania received the territory of Vilna (present Vilnius) in the Vilnius region (6 656 sq. Km) with a population of about half a million people, among whom Lithuanians made up no more than 20%.” joining the USSR. Not after, but before!)

In the summer of 1940, the Soviet Union, within the framework of treaties with the Baltic states, introduced additional troops into their territory. What for? Then, that near - in Poland and almost all of Europe - was Hitler, and the German troops could be on the territory of the Baltic States.

The government of Latvia has authorized the introduction of additional Soviet troops. There were no fighting. There was no resistance, nobody defended “independent Latvia”. War is not declared. No one was arrested and missed.
After the introduction of troops, new elections were held, and (approximately in a month) the new government asked to accept Latvia in the USSR.
“A common mistake is the idea that the Communists participated in the elections. This is not true. A number of various organizations united in three countries into the so-called Unions of the Working People. This is not the same as the communist parties, because these blocks included trade union organizations, youth associations — naturally, this unified platform was attractive to many voters ... According to the results of the elections held in three 14 – 15 countries in July, the candidates of the Unions working people received 93% of votes in Estonia, 99% in Lithuania, 97,8% in Latvia ... Despite the violations and lack of alternative, these elections were more democratic than all previous elections in the Baltic States. This is confirmed by voter turnout, their activity: in Estonia, for example, voter turnout in 1940 was higher than 1938 in 33% (!) ”.

(In passing: the Latvian army was not disbanded, but on a par with the armies of Estonia and Lithuania was reorganized into separate corps and in this form reached 22 June 1941 of the year. I do not know how the Latvian corps, but the Estonians even had a different form than the Red Army.)

5. There was no capture and hostilities; everything took place within the framework of the law, which means that there was no occupation of the Baltic states. It was an incorporation in the USSR, interrupted by Nazi aggression. In 1945, the USSR defeated the aggressor and restored its territorial integrity.

Incorporation. Entry That is the term now used by the Balts themselves.

And not only they, but also their older "comrades."

"US Congress: We have never recognized the incorporation of the Baltic states in the USSR

On Tuesday, December 7, the US House of Representatives approved a resolution congratulating the Baltic States on the 20 anniversary of the restoration of independence and urged the US President to continue to strengthen relations and actively cooperate with Estonia, Latvia and Lithuania, reports DELFI.

The resolution notes that the United States has never recognized the incorporation of the Baltic countries into the Soviet Union. The congressmen note that, despite the repressions carried out in Soviet times against the people of Latvia, Lithuania and Estonia, the belief in freedom and independence in these nations has not been destroyed. ”

6. Latvia and the other Baltic states were not democracies.
“Estonia, Latvia and Lithuania during the 20 years of their existence were not democratic states. Suffice it to recall that the formation of statehood in these countries took place in 1918 under the conditions of German occupation.
In 30-s. here authoritarian regimes were established, often referred to in the literature as “presidential dictatorships” (Konstantin Päts in Estonia, Karlis Ulmanis in Latvia and Antanas Smetona in Lithuania) with censorship so familiar to us, the prohibition of political parties, the “personality cult” (the Latvian press, for example , proclaimed Ulmanis "the greatest figure of Europe" and "twice a genius") ...

Is the “unconstitutional” argument, and therefore the illegitimate change of political regimes in the Baltic countries in July 1940, strong, if the leaders of these states didn’t rule according to constitutions for a long time? ”

The conclusion is simple: attempts to rewrite the history that we see from the West and the Baltic states are easily broken down into historical facts. Therefore, Latvia, following Lithuania, is in a hurry to cover this negative work with an article of the Criminal Code.

I think that the Russian authorities are unacceptably mildly dealing with those countries that insult the memory of our soldiers and allow themselves to be so unfriendly. Russia has every opportunity to punish those who do not respect it peacefully, by purely economic methods.

But time will put everything in its place ...