"If we have nowhere to go will." The representative of the Lugansk Cossacks explained his appeal for the introduction of Russian troops in Ukraine 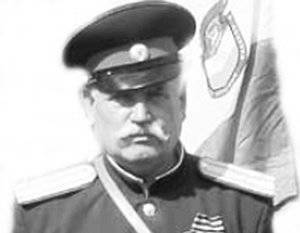 “I have the right to protect our fellow citizens, because I am very worried about our Lugansk region. After all, we have been together for so many centuries! I have half of my relatives in Russia, ”Leonid Ruban, ataman of the Lugansk district of the Don Cossacks, told the newspaper VIEW. So he commented on the appeal of the Cossacks to Vladimir Putin with a request to provide military support to Ukraine.


“We, Don Cossacks, faithful to the Orthodox faith, Fatherland and Don, by the will of the Lord, are in the territory of the fraternal Russian state of Ukraine, the situation in which at the moment causes horror,” the message says, “Ukrainskaya Pravda” writes.

The appeal emphasizes: “The riots on the streets, the inaction of the police and the authorities towards the radically minded young men who cripple our fellow citizens, employees of the Ministry of Internal Affairs, destroy historical monuments are causing discord in society. ”

According to the Cossacks, "opposition leaders are provoking a civil war, claiming that they will turn to the troops of the North Atlantic Treaty Organization (NATO) for help."

“We appeal to you with a request not to give us up to be torn apart by the Western Herods. And in the event of further deepening of the political crisis, attempts to introduce NATO troops into the territory of Ukraine, to provide military support to the people of Ukraine, ”the Cossacks said in a message.

Also they sent their appeal to the Union of Cossack troops of Russia and abroad.

It should be noted that at the end of January, the highest ataman of the Union of Cossack troops in Russia and abroad, Viktor Volodatsky, had already announced that the Cossacks were ready to assist in ending the unrest in Ukraine.

This is not the first such appeal to the Russian president. So, in December last year, deputy of the Sevastopol City Council from the Party of Regions of Ukraine faction Sergei Smolyaninov wrote an open letter to Putin asking him to give an order to bring Russian troops into Ukraine to protect the country from the "US Army and their NATO aggressors."

VIEW: Leonid Alexandrovich, what was the reason for another similar appeal to the Russian president? It seems to be now in Ukraine, a relative lull. The president and the opposition are negotiating, the epicenter of events from the streets and barricades has moved to parliament.

Leonid Ruban: This is because Yatsenyuk (the leader of the “Batkivschyna” parliamentary faction Arseniy Yatsenyuk - LOOK) announced that they will ask for the introduction of NATO troops to restore order. Yes, we have a lull in the Luhansk region. But you will notice that we are in favor of not spilling blood in Ukraine. We are for order. In order not to destroy our buildings, not to destroy our monuments. I love Kiev more than Moscow. And this was the city - the beauty, but what is now made of it? What made from other cities? Cracked, pogromed. And now, in order to restore all this, they will take money from our pocket. And so, gentlemen, well, you do not like the president, the time will come, reelect! But now there is power, and I must submit to power. Our Lugansk rose first. The region rose, the Cossacks rose. Thanks, of course, to our governor for supporting the public.

VIEW: And tell me, have you come to Kiev lately? Were you at rallies in support of the president or on the Maidan to understand what was going on?

L.R.: I did not go there. I am in favor of that, once such disassemblies have already gone, we decided here to keep discipline and order in Lugansk, so that nothing could be destroyed here.

VIEW: In Lugansk, there was a threat of destruction of monuments, buildings?

VIEW: What, then, and from whom you are guarding?

L.R.: People just guard all their own. If you don't like the monument, spit on it, but why destroy it? There is a decision of deputies of the region to give under the protection of the Cossacks of administrative building and the center of the city, in which there are cultural monuments and other valuable objects. This is not only in Lugansk. But Krasnodon, the village of Lugansk, Alchevsk, Stakhanov.

VIEW: The local government can not provide protection through law enforcement? Why are you assigned to perform these functions?

L.R.: Understand correctly, police officers have limitations. And I'm a citizen, like the one that will go to destroy. We are both citizens of Ukraine and equal in rights. If he tries to hit, I have every right to give an answer. Without breaking the law. I protect my! But the employees of the Ministry of Internal Affairs are limited by something: it is impossible to shoot, it cannot be there, nothing else.

VIEW: But there was no precedent? You did not have to defend?

L.R.: No no no. We, namely the Cossacks, did not have any clashes with maydanutymi there. They scolded us, but we gave no answer. Just stood so that there was order. They said, they say, that you are guarding the governor. I said no, we are guarding you. Your children and your grandchildren, so that they calmly go to work and can live peacefully here, so that there is no lawlessness.

LOOK: So your request to Russian President Vladimir Putin for the introduction of troops is only a response to the threats of one of the opposition leaders, Arseniy Yatsenyuk, to ask for help from NATO?

L.R.: Of course! Of course! I did not break anything. Simply, if he believes that he has the right to appeal to enter NATO troops, then I am the same as he, though not a deputy. I have the right to protect our fellow citizens, because I am very worried about our Lugansk region. After all, we have been together for so many centuries! I have half of my relatives in Russia. So what should i do?

VIEW: In your opinion, assuming hypothetically that Russia will deploy its troops to Ukraine, will this stabilize the situation? Is this a way out of the political crisis?

L.R.: Russia will never bring troops to Ukraine, if everything is peaceful. Because the border, this concept is. But if there is any situation, I think that Russia will support Ukraine, because we are fraternal peoples.

L.R.: Well, it was already at the end of the phrase, and there is a reservation - “if” ... If it will be like that. And these are different things - please enter and "if we have nowhere to go will." I can't demand it. Nobody authorized me. I am a citizen of Ukraine.